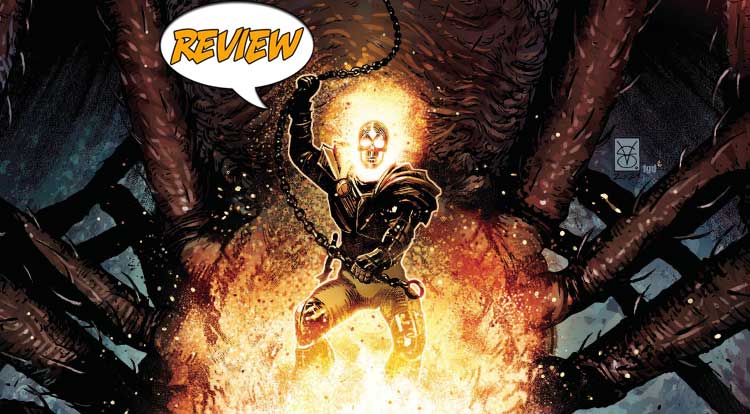 Previously in Savage Avengers:  Conan and Ghost Rider get to the bottom of Nightmare’s machinations and his werewolves’ origins… and Johnny Blaze isn’t the first Ghost Rider that Conan has encountered – he knew one back in Hyboria that rode around on a GIANT SPIDER.  This chapter proves you can’t spell “flashback” without the “AAH!”

TRAPPED IN A LABYRINTH OF NIGHTMARE

Savage Avengers #22 begins with Conan awakening in a tavern in Cimmeria, seemingly home, though his last memories were fighting Ghost Rider in the streets of New York City.  He suddenly remembers that Johnny Blaze wasn’t the FIRST Ghost Rider he ever faced, and as if on cue, that Rider appears, astride a giant mystic spider.  The Cimmerian fights, but is poisoned, dying from the creatures venom… when he awakens, trapped in the realm of Nightmare.  He and Blaze then have to fight Johnny’s nightmares before meeting that realms master.  Or, to be clear, former master, as Nightmare has been deposed by Conan’s old foe, Kulan Gath, who is now presiding over the world of nightmares.  Still, Nightmare reminds them, even a powerful sorcerer is still a man, and Kulan Gath has his own terrible fear: Conan himself.  Conan leaves Ghost Rider to find Doctor Strange, but finds that the Sorcerer Supreme is with another patient, an extradimensional monster called… Shuma-Gorath!

There’s something oddly off-putting about the faces (especially the eyes) of the human characters in Savage Avengers #22.  It’s not quite Gary Frank Crazy Eye Syndrome, but Johnny, Conan and even Kulan Gath seem to have the same deadened expression throughout the issue, which bugs me.  That said, Zircher’s art is really lush in its depiction of both nightmare and Conan’s lost reality, and the final page reveal of Shuma-Gorath is quite good.  The story itself really feels like a Marvel Conan book that just happens to guest-star Ghost Rider, which I whole-heartedly support.  The placing of Conan in a modern Marvel Universe context has been sticking in my craw since it started, even if (as this issue reminds us) much of Conan’s world is already canonical, like Shuma-Gorath and Kulan Gath.  Once again, I don’t know why (other than pure naked mercenary instincts) this would be under Avengers trade-dress, but it’s a pretty solid Conan story all told.

In short, Savage Avengers #22 makes for a fast, fun sword-and-sorcery nonsense adventure, and if you ignore Johnny’s motorcycle, one that might as well have taken place in ancient Symmetria under the reign of Empress Minutiae, with art that works most of the time, if you’re not freaked out by dead eyes, earning a better-than-average 3.5 out of 5 stars overall.  This creative team knows their Conan, and that works even when he’s not on his home turf, which is pretty remarkable.

This reads like a Conan comic that just happens to have Johnny Blaze and his fiery counterpart in it, and as such, I like it a lot, though the art leaves a bit to be desired.