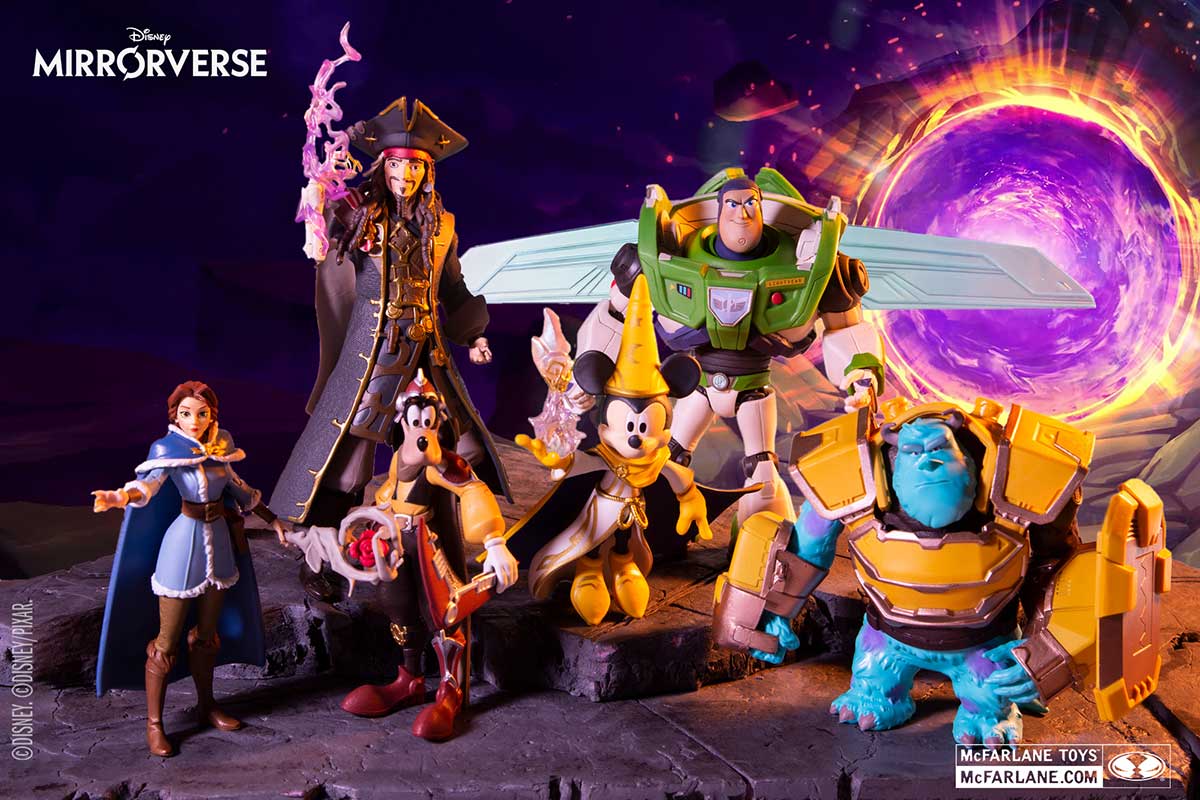 McFarlane Toys announced today that the action-ready worlds of the highly anticipated Disney Mirrorverse mobile game will come to life with a collection of 5-inch and 7-inch action figures.

McFarlane Toys, known for its artistic and creatively designed toys, will create highly detailed action figures of Disney Mirrorverse Guardians – heroes and villains based on iconic Disney and Pixar characters.

The figures are based on the upcoming mobile game, Disney Mirrorverse, developed by Kabam in collaboration with Disney. The mobile game is set in an entirely new divergent universe full of reimagined Disney and Pixar characters that are powerfully amplified and battle-ready unlike anything fans have seen before.

The new collection of Disney Mirrorverse 7-inch figures (MSRP $19.99) from McFarlane Toys will feature battle-ready Buzz Lightyear and Captain Jack Sparrow. Each incredibly detailed figure is designed with “Ultra Articulation” with up to 22 moving parts for a full range of posing and play and includes storytelling accessories from the game, and a collectible Disney Mirrorverse art card.

You can pre-order the 7-inch Disney Mirrorverse Collection by visiting McFarlane.com

The Disney Mirrorverse 7-inch Collection from McFarlane Toys will be available starting September at mass and specialty retailers nationwide. For Where to Buy information, please visit McFarlane.com.

The 5-inch action figure collection will include fan favorites Sulley, Mickey Mouse, Belle, and Goofy. The 5-inch action figures (MSRP $12.99) are designed with articulation for pose and play. Each figure will come with storytelling accessories from the game and a collectible art card with Disney Mirrorverse artwork.

In addition, the Disney Mirrorverse 5-inch Collection from McFarlane Toys will be available starting in August at mass and specialty retailers nationwide..

“As a kid, I grew up mesmerized by the storytelling of Disney. The creativity and visual playground of Disney and Pixar in many mediums have enriched all our lives and were instrumental in growing my passion for art, designing, and creating,” said Todd McFarlane, McFarlane Toys CEO and Creative Force. “We are excited to collaborate with Disney to create figures for these original Disney Mirrorverse character designs with some surprising twists! We will approach the crafting of each figure with the authentic details and rich storytelling you expect from McFarlane Toys and Disney.”

“It’s a unique privilege to bring together world-class creative teams across mediums to help us introduce this original setting to players and fans around the world, said Luigi Priore, VP, Disney & Pixar Games. “The creation of this new universe will usher in new stories and experiences which fans can enjoy in-game and beyond. McFarlane Toys are known for their authentic, distinctive, and highly collectible figures, which are a perfect fit for the bold new vision of Disney Mirrorverse.”

“Kabam and Disney & Pixar Games have been working together for years to imagine a whole new world where fans can take on The Fractured and defend the Mirroverse,” said Tim Fields, CEO of Kabam. “Bringing these reimagined characters to fans with McFarlane Toys has been such a treat. I can’t wait to see how this amazing collection of characters look when brought to life by one of the most creative teams in the world.”
Disney Mirrorverse transports Disney fans and RPG gamers into an all-new, divergent universe to battle against unrelenting dark forces. Disney and Pixar characters evolved and empowered in unexpected and authentic ways as Guardians must defend the Mirrorverse from a malevolent threat.