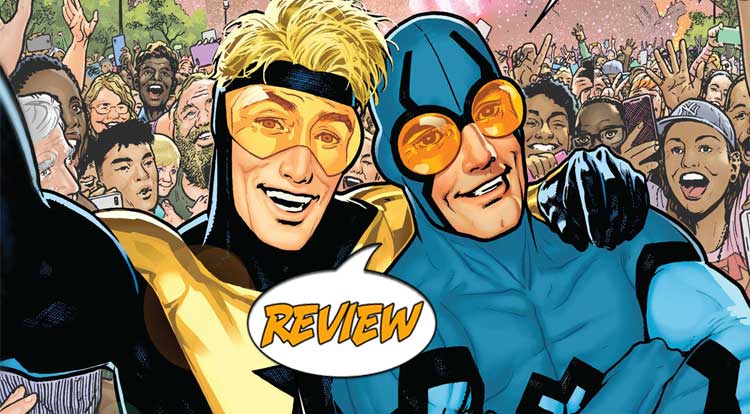 The boys are back, so lock the doors, hide the good silver and keep ’em away from Kooey Kooey Kooey.  Your Major Spoilers review of Blue and Gold #1 from DC Comics awaits!

Previously in Blue and Gold:  Desperate to regain the spotlight, Booster Gold looks to attract the public’s (and Justice League’s) attention the same way any washed-up, second-rate hero would—social media.  The not-so-tech-savvy hero from the 25th century enlists the help of his best friend, Blue Beetle, who possesses both the money and the brains to help his old pal navigate the scary world of internet influencers.  Watch out, evildoers, our heroes are live and online!

Well, one thing you can say for Blue and Gold #1 is that it doesn’t skimp on the action.  We start with Booster’s former secretary Trixie (at least I *think* it’s her) watching live as Booster engages in battle with a hovering alien ship above Manhattan.  The entire Justice League has been captured and Booster is ready to step up and save the day and also beg for subscribers on his livestream.  The battle goes well at first, but Booster is overwhelmed by the ship’s defense systems, forcing Skeets to flee the scene for help.  Just as all seems lost, Blue Beetle arrives in style, fighting off the drone systems with his flying Bug.  Sadly, the ship’s cannons blow the Bug out of the sky, but it’s enough of a distraction for the Blue & Gold team to make their way inside the ship and free the Justice League.  Once they’re out, Black Adam distracts Booster so that the rest of the team can make Blue Beetle a former offer of membership…  as long as he’s willing to accept that Booster isn’t invited.

On the one hand, the conceit of having the comments of the livestreamers appear on-screen is an interesting one, but it quickly reminds me why you shouldn’t read real-world comments, and quickly devolves into a distraction, with “LOL” and “Deepfake” cries quickly getting repetitious.  Those captions aren’t the only issue with dialogue in this issue, as Booster narrates to Skeets, Ted monologues to his dead father, the Justice League announces each other’s names and more.  There is a LOT of expository “as you already know” to be had here, and only the interactions between Ted and Booster feel really natural.  (Ted’s also keeping a secret, which I’m calling right here: He’s lost his fortune.)  The plotting/pacing side is much more skillfully handled, though, and Sook’s art makes Booster look amazing.  He needs his collar back, but I’ve been barking up that tree for years.  I’m somewhat less enamored with this issue’s coloring, which feels over-saturated and can be distracting, especially the boys’ visors, which limits facial expression.

BOTTOM LINE: NOT QUITE WHERE I HOPED

Even with my complaints, Blue and Gold #1 is a fun comic throughout, and even though it feels like a regressive take on Booster Gold, there are aspects here that I really want to like, which combines with strong art for a better-than-average 3 out of 5 stars overall.  There are definitely elements here that I want more of and I’d like to see the whys of Booster and Beetle’s new statuses quo, just…  Maybe less of the social media gimmick.

The plot is interesting and the art is truly lovely, but the dialogue feels very pedestrian and expository, and Booster's reversion to type feels very abrupt. Still, it's good to see them back.