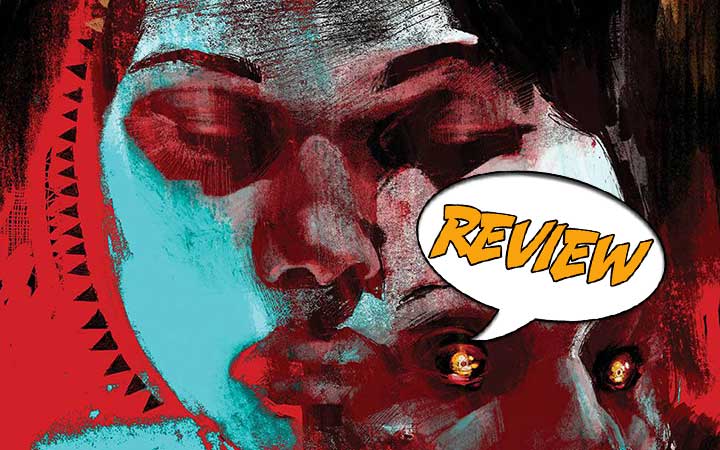 It’s a vampire fight, and they are looking for Seesaw. He brought Adams back, but where is he and what is he doing now? Find out in Killadelphia #15 from Image Comics!

Previously in Killadelphia: The battle for the soul of the United States grows more complicated as Thomas Jefferson joins the match. Seesaw (Tevin) has brought Adams back from the dead. Adams returns to Abigail, only to find out that not only has she changed the battle lines, but she is angry with him with the anger of two hundred plus years of oppression. Adams goes to the Sangsters, and Abigail sends her forces after him there. In the attack, Jimmy is bitten. Meanwhile, Seesaw uses his magical abilities to go looking for more answers.

A BATTLE ON MULTIPLE PLANES

Killadelphia #15 does not shy away from politics. Of course not, with the backbone of the story being vampires who also happen to be founding fathers. But this allows it to take some key ideas about the origins of this nation and look at them through the lenses of time and our present-day reality. The issue opens with Thomas Jefferson musing upon some of the innate inconsistencies of America. Is this a land of freedom, or is it a land of economic tribalism, where the haves and the have-nots are in conflict? Which side will he be on, he wonders, even as he and his family feed on – quite horribly – a Boy Scout camp-out.

Seesaw has talked with the Devil to obtain the freedom of John Adams. Now, in his spirit body, he seeks answers from God. He wants to save Jimmy Sangster from his vampirism. I respect that he is totally up front about this. He doesn’t want to be told to pray. He has seen the people he loves, people going through great hardship, pray without getting any results. God tells him his soul is pure and he is worthy of love, but Seesaw is not afraid to ask, “Where have you been?” when so many of his people have been so hurt. But the Almighty works in mysterious ways, and tells him to speak to other enlightened ones, and he will find what he seeks.

In the physical world, the fight in Sangster’s house continues. Jefferson muses on the words he once wrote famously, “All men are created equal.” He acknowledges that he owed hundreds of slaves at the time and may have even loved Sally Hemings. There are contradictions between his conscience and reality.

Seesaw stubbornly continues his quest, talking with Buddha, Zarathustra, Muhammad, and more. He learns things, things he wishes he could have understood while he was still alive. But knowledge alone may not be enough for the fight he is in.

Jimmy Sangster wants to keep Jose safe. She resents being told what to do. To balance out the seriousness, James gets pissed that the vampires are trashing his house. Toppy and Adams struggle. Toppy wants to know where Seesaw is, and he sees Adams as now being a traitor. Little do they know that Jefferson has made the decision to enter the battle, hoping to become president again. And he meets perhaps the last person he was expecting – Jupiter.

A MASTER CLASS IN HORROR

The art of Killadelphia #15 is moody and often tense. The sequence with the attack on the Scout camp is a case in point. It starts out quietly, if creepily, enough when you consider that Jefferson’s family are essentially zombies. They spot the camp from afar, and we see the campers having fun around the fire. Jefferson gets quite close before they realize that anything could be happening. We don’t see an enormous amount of gore, but we do see the dawn of horror on the faces of the victims, and it is quite chilling.

I like the depiction of gods as Tevin makes his rounds talking to them. The God that he finds first is Black, like himself. The angels around him are women, but they have a truly unearthly look about them besides appearing to be made of light. When they depart, God’s halo glows, and we get a taste of almost a traditional heaven – clouds and streaming light that starts out as an intense blue-white and fades to an almost sunset orange.

Killadelphia #15 is bold and stunning. Horror is a surprisingly good vehicle to use to tackle some of the difficult questions of our time, and this book does it in grand style.

The action may be on Earth, but Tevin looks for answers in the spirit realm.