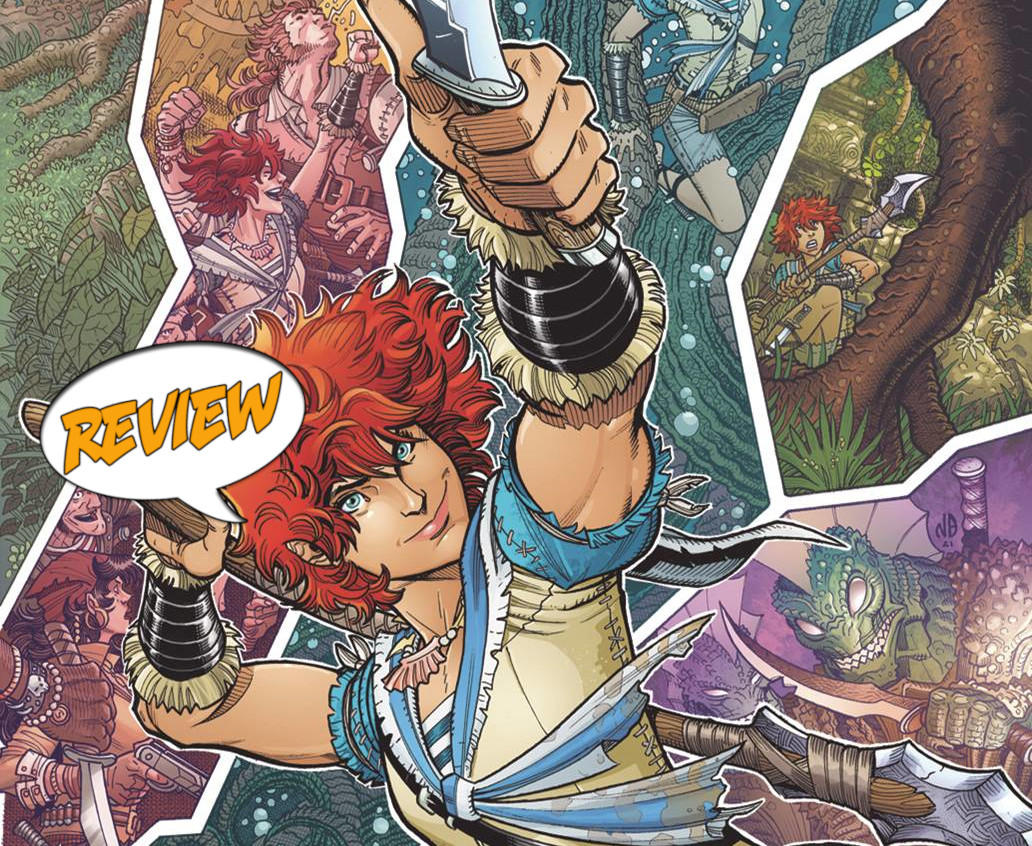 Bermuda lives in the region of the Atlantic Ocean where planes disappear, ships are lost, and souls go missing. Come check out her island in Bermuda #1 by IDW Publishing!

Previously in Bermuda: Bermuda lives on the island of Trangle (not Triangle) and navigates a world filled with dinosaurs, aliens, pirates and more! Orphaned as a kid, she grew up on this island under the supervision of Doctor Hito Nakamura. However, there are secrets to Trangle that have yet to be revealed!

Bermuda #1 begins with a plane stuck in a storm. Bobby and Andi are kids flying to Bermuda (location) under the protection of Mr. Rodriguez. Unfortunately, lightning strikes the plane explodes. Bobby wakes up on the shore of the island where he meets Bermuda (person). She says that they need to move quickly and salvage what they can before anyone else arrives. Bobby begins to look for Andi but is interrupted by fish creatures who are looking for new slaves. These fishmen grab Andi and kill Mr. Rodriguez. Bermuda tells Bobby to run while fighting off her would be captors.

After winning the fight, Bermuda takes Bobby to Doctor Hito Nakamura who tells Bobby that his life is about to change. Meanwhile, Bobby’s father, Elliott looks for his children and he knows that the plane didn’t fly through a storm, but rather a door!

I liked that Bermuda #1 kept us mostly from the perspective of Bobby. While Bermuda is the title character, she knows a lot about this island. Bobby on the other hand is the perfect point of view to show the reader what is going on. Through his eyes, we can receive the worldbuilding and setting. And I think the setting is this comic’s greatest strength. Right from the bat we are thrown to an action packed hook that starts with a storm. We figure out quickly that the storm is supernatural and when we arrive on Trangle, where we are quickly introduced to one of the islands native people. This fast paced storytelling that constantly gives us new ideas is exciting and grips the reader into the moment.

This title makes me care more about discovering the world as opposed to the characters. I felt a bit of sadness when Mr. Rodriguez was killed off within the first half of the book, but the moment felt like exposition then plot or character driven. Perhaps that is what the creative team intended but I think we could have had more of an emotional impact. This may be something we discuss in a later issue though. Many miniseries tend to read better as a trade paperback then in individual issues. Regardless, great work by the creative teams. The writing and art are extremely well done, and I think this series could be amazing.

Bermuda #1 had me hooked into the plot from the first page. The creative team has a strong idea of what they want for the series and executes them well. Bermuda #1 by IDW Publishing is a 4 out of 5 from me and I am excited to see what they next issue brings to the table.

Bermuda #1 grips us into solid worldbuilding by keeping up a fast pace that doesn't overwhelm the reader.