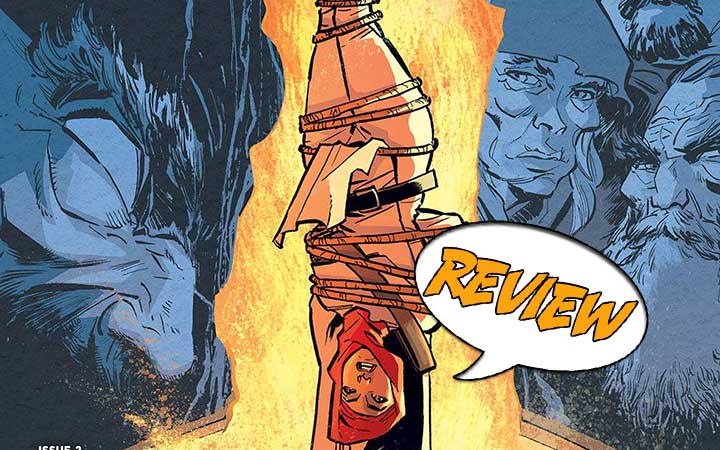 Shahi thinks she has discovered a clue in the Abbot’s books. Will her explorations get her closer to the Cauldron before Ling and the Khan? Find out in Compass: The Cauldron of Eternal Life #2 from Image Comics!

COMPASS: THE CAULDRON OF ETERNAL LIFE #2

Previously in Compass: The Cauldron of Eternal Life: Shahidah El-Amin, a scholar and adventurer from the House of Wisdom in Baghdad, has come to Wales. She is looking for a large, ornate ring but her former friend and current rival, Ling, found it first. Ling is Chinese, but this is set in the time period during the Mongol conquest, and she is here in the emply of Margul Shadgur, a Khan of the Golden Horde. Shahi escapes from the Mongols and is found by Welsh farmers who bring her to Lord Ednyfed. Shahi holds from that the local Abbot has granted her safe custody. Ednyfed cannot believe it and takes her to see the Abbot – only to find him dead!

Compass: The Cauldron of Eternal Life #2 opens with Shahidah and Ednyfed looking up from the Abbot’s body and seeing one of Margul Shadgur’s assassins, who throws his dagger at them. He flees and Shahi chases him through the building site of the cathedral. They meet at the top of the wheel used to lift construction materials and fight there until Shahi tosses him off. On the ground, he reveals himself to be a leper. Shahi starts to question him, but Ednyfed kills him outright. He orders his men to burn the body, the Abbot’s body, the church, and his books and papers. Shahi begs that the books be spared until she can look at them.

In a nearby village, Margul Shadgur watches as his men destroy the town and take its people. He wonders by Ling does not participate; after all, her former colleague is quite a fighter. Ling declares herself to be a scholar. The Khan reminds her that she belongs to him now.

Shahi and Ednyfed discuss leprosy while he observes her work with the Abbot’s books and papers from some distance. Shahi keeps her hands and arms covered as well as her lower face. Their conversation turns to how the miracles in stories are always in some far away land. Then they talk about why she is here. She knows that the Mongols are looking for the Cauldron of Arawn, said to grant its owner life forever. She just wants to know the truth. Ednyfed scoffs at her for believing superstitions, but she counters that the Abbot believed. She continues to peruse the books until she realizes that there is a code hidden in their pictures.

The Khan wonders why Arban, his assassin, has not returned and orders Ling to think on it. From hearing the bell, she considers that Arban accomplished his task, but was caught before he could burn the church. And if they were not burned, Shahi will discover their secret.

Indeed, on a moonlit night, Shahidah goes into the woods where she is promptly caught in a snare and brought to a place where the Druids hold sway with survivors from the Mongols’ attack. They view her as an outlander, and their first thought is to kill her. Shahi is nothing of not prepared and invokes the Laws of Hywel Dda. She also names the Abbot and Lord Ednyfed. She slips free from her ropes but does not run away. Instead, she says that she knows about the Cauldron.

Shahi says that she has come to learn about the Cauldron and how it works. The Mongols have come to take it. The Druids say that even if they know where the barrow is, they do not know the secret of the path. But with Hua Ling helping them, is the Cauldron safe?

Compass: The Cauldron of Eternal Life #2 opens with a fun action sequence. Setting it in the midst of a cathedral under construction sets up a terrific chase as Arban climbs high up the stonework, leaping for ropes and forcing Shahi to follow him. Having a double wheel, used like a human-powered crane, is both historically fitting and interesting as a fight prop. These visual reminders of the time period keep me anchored to the setting in a way that feels unobtrusive.

I also liked bringing the Druids, about whom relatively little is known, into the story. The place where they meet is, fittingly, in the woods and is built into the trees so there are several elevated observation platforms to watch Shahi about to be burned. Dramatically, she is tied up and hanging by her legs above a fire. She neatly unties herself and scrambles up the rope to get to one of the platforms. Again, it is an action sequence, and you can practically feel Shahi’s energy and determination.

In Compass: The Cauldron of Eternal Life #2, we learn what is at stake. All the pieces appear to be on the playing field and we are at that wonderful point where everyone is at cross purposes, and we cannot know who can be trusted.

Compass: The Cauldron of Eternal Life #2

On her own and far from Baghdad, can Shahidah put together enough allies to keep Margul Shagur from taking the Cauldron?