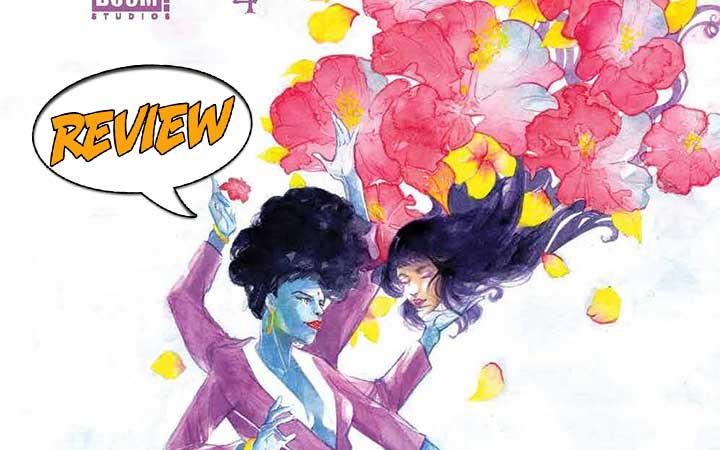 The Many Deaths of Laila Starr #4 Review

Laila Starr’s lives have not worked out as she hoped, so this time she carefully works to meet Darius Shah and talk with him. But this conversation does not go as she expected! Find out more in The Many Deaths of Laila Starr #4 from BOOM! Studios.

THE MANY DEATHS OF LAILA STARR #4

Previously in The Many Deaths of Laila Starr: The former Goddess of Death is given a mortal life, and learns she isn’t very good at keeping it, although the God of Life has managed to bring her back each time. As it so happens, she keeps dying after encounters with Darius Shah, ironically, the man destined to bring about eternal life – and the reason she was fired from her Goddess job. It appears that, one way or another, he will be the death of her. These meetings happen at moments that shape his life, and in turn, they shape her understanding of life. Last time, it was his first breakup and the death of his best friend.

The Many Deaths of Laila Starr #5 opens with Laila in a bustling neighborhood, looking for an address. She steps into a small Chinese temple. It greets her and she answers. In a moment of surprise, she asks if this voice is a God. It is equally surprised as it replies that it is just the temple. She asks why no one is there, and the temple explains that its caretaker, Wei, usually comes in, but he’s not here. We briefly get a lovely, poetic impression of Wei from the point of view of the temple.

This story slowly blends into the story of Chinese immigrants to Mumbai who came to work at the mills. Over the many years people came and went, but Wei stayed. He had come as a boy – what had he to go back to in China? He was the last of the immigrant mill workers, and this temple is the only Chinese temple left. It is a charming encounter. Before she goes, she asks it about the address, and it is able to direct her. All it asks in return is that she check on Wei.

She finds the house she was looking for – the house of Darius Shah – and knocks on the door. There is no answer, but it is unlocked so she goes inside. In a few short panels we learn that he is 36 and has already achieved wealth, fame, respect, a family…but why does the house look unkempt?

He steps into the room and asks her to sit. He saw her approaching and recognized her and now he has some questions. He remembers seeing her at the beach and at the party. Who is she? Why hasn’t she changed over the years? And she tells him the truth, and that she has come here, finally, to talk to him, to try to talk him out of something.

He interrupts her. He has looked into her and has seen the stories in the papers. He has seen the pictures where her face does not change, and it still has not changed. He has only seen her after someone died. She admits she was the Goddess of Death and his reaction is anger. Anger and grief, as we see in the headline of a paper on the floor that he has lost his wife to cancer. And now with Death right there, he asks the question we always ask – “Why?” Why did his wife have to die? And what makes Laila so special that she gets to live, and live, and live again?

His little boy comes downstairs, and Darius swears that he will find a way to keep Death from taking anyone else. In trying to stop him from doing this, she has inadvertently made him resolve to do it in the first place. And Laila Starr feels fear and feels guilt, even though this time she had nothing to do with the death.

The impending rain turns to a storm. Laila returns to the temple to tell it that Wei is dead, for he is. The temple asks her to stay, and to open its doors in the morning, in case someone should like to come in. Instead, flood waters come in, the temple is destroyed, and Laila Starr dies yet again.

The art of The Many Deaths of Laila Starr #4 is lyrical. In this issue, we really see that these moments in time, short as they have been, have made an impression. Laila’s face keeps being crossed by different emotions, emotions she is not that experienced in dealing with. She is mortal, but when you look at her life, she has only been alive and on earth and interacting with humans as a mortal for only a few days.

There is so much to find in the art that supports the story. In this issue, I liked the way Darius Shah’s house is used. The narration tells us he is a young success with a beautiful home. While it looks like it has a lot of beautiful things in it, we can see immediately that, unlike the temple, it does not look loved. Newspapers, photographs, and drinking glasses cover many of the surfaces. We get the feeling that something is not right here even before we see Darius, and when we so see him, we are not surprised that he is unshaven and unkempt. I also like the way this sets up the newspapers that show us the headlines about Laila’s deaths, and the death of Darius’ wife.

The Many Deaths of Laila Starr #4 is unquestionably brilliant, a story that brings us face to face with the questions we all have about life and about death. And by exploring these, it also shows us some of what it means simply to be human.

The Many Deaths of Laila Starr #4

Laila is more careful this time and looks for Darius so she can talk with him.