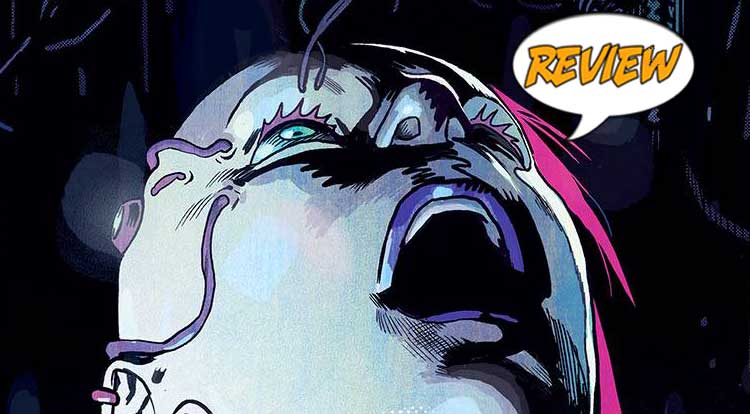 A curse, once created, needs to feed… Your Major Spoilers review of The Silver Coin #4 from Image Comics awaits!

Previously in The Silver Coin: The year is 2467, and the old world has been buried beneath the junk of a new civilization.  From the trash, a scavenger discovers ancient treasure – a coin.

The price it carries, however, is unimaginable.

The Silver Coin #4 opens in a crowded city filled with people wearing strange cybernetic implants, as Officer Colton Dudley logs into his drone for another shift of watching over the city.  When he hears of a crime in progress, his robot eyes find three criminals roughing up and mugging an innocent for the few credits he has in his account.  Rather than steal his wallet, though, our cyborg thief jacks her optical sensors right into his eye, giving me the creeps and stealing 43 credits.  They then go on the run, with Dudley’s drone on their tail, picking them off one by one as Bragie just tries to get away safely.  In trying to escape, she falls into a crevasse that lands her in what seems to be the ruins of old New York, where she finds a skeletal form holding the titular Silver Coin.

As she picks it up, her computer begins warning her, “VIRUS DETECTED.”

The Silver Coin #4 feels like it wants to make a statement about police violence and class warfare, but I’m not entirely sure what that is.  Lemire’s script is very tightly written, and Dudley’s horrific comeuppance is truly disturbing if you’re creeped out by body horror like I am.  All of the cybernetics sequences, actually, have that sense of demonic horror to them, making the mundane evil of The Silver Coin seem almost quaint by comparison.  That said, the ending doesn’t feel as satisfying as previous issues, coming quickly and abruptly, followed by the ad for next month’s edition.  That said, the art  is successful in conveying both a society in decay and the truly disgusting visuals of cables in someone’s eye, looking like worms in your sockets with aplomb, and the cityscapes are pretty marvelous.  The crumbling streets of the city that I presume is NYC are also very impressive work, making for an issue that looks great, albeit horrifying.

All in all, The Silver Coin #4 isn’t quite as successful as the previous issues, but that’s damning with some faint praise, as it gives us moody, dense visuals that convey dread and decay effectively, with a story that is disturbing, even if it isn’t quite as well-crafted as the first three, earning 3 out of 5 stars overall.  I’m glad to see Image experimenting with this kind of anthology content, especially given the success of Ice Cream Man and such, and I hope to see this book really start knocking things out of the metaphorical park like that title.

Interesting themes and a fun (if somewhat familiar) cyberpunk reality, but the story feels like it ends abruptly and needs some fleshing out.