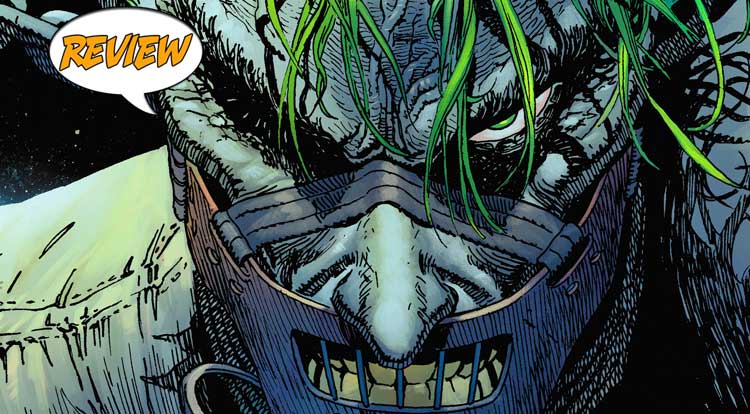 It’s the story of the first night The Joker ever spent in Arkham Asylum…  Your Major Spoilers review of The Joker #5 from DC Comics awaits!

Previously in The Joker:  It’s the untold story of The Joker’s first night in Arkham Asylum!  When a lunatic in a clown suit tries to poison Gotham City’s reservoir and is placed in Arkham Asylum before his trial, Detective Jim Gordon realizes something’s different about this new inmate that could forever change the future of Gotham.

The Joker #5 opens with Captain Jim Gordon, in the long ago days of Gotham, foolishly rushing into a situation without backup and bringing down the perpetrators.  As he is being stitched up by paramedics, District Attorney Harvey Dent arrives with good news and bad news.  (“He’s suing me for excessive force?”  “Actually, yes…”  Heh.)  Gordon agrees to assist with a tip about the Falcone mob on his day off, then attends marriage counseling with his wife, only to get called for being distracted.  His mind is focused on The Joker, a new face in town, who is being sent not to jail, but to the Arkham Asylum, where Gordon is sure he’ll waltz right back out.  Dr. Arkham disagrees with him, as does D.A. Dent, his wife, the commissioner of the police force and pretty much everyone else, but he still makes his way to Arkham to watch the green-haired psychopath like a hawk.  Our second story features Harper Row trying to track down information on Punchline, who has built an empire behind bars and has found new fame and followers thanks to a podcast about her.

I hadn’t been paying attention to this comic, but The Joker #5 promised me Francesco Francavilla art, and so I braved the horror that is Punchline and my discontent with villain-as-protagonist and… I’m glad I did.  Francavilla’s art on the lead story is wonderful, moody and perfectly suited to Gordon’s realization that something bad is happening in Gotham City.  The last page reveals how much Jim Gordon is giving up to try and save Gotham, and it’s a real gut-punch in all the best ways.  I also didn’t realize how talented Sweeney Boo is, but the second half of this book is beautiful too, with a lovely neon color palette that makes everything look great, even as I don’t care one white about Punchline as a character or a concept.  The second story’s plot is one big shrug for me, as nothing has happened in FIVE MONTHS of this book, and nothing seems to be happening any time soon, but the visuals are so well-done that I almost don’t care…  Almost.

BOTTOM LINE: BETTER THAN I EXPECTED

Even with the praise for this issue’s visuals, though, The Joker #5 has an exorbitant price tag for no reason other that “Bat-books cost five dollars now, so a double-sized one costs six”, but the material presented here almost makes it a break-even point, with excellent art and a lead story that delves deep into the mind of Jim Gordon, earning 4 out of 5 stars overall.  As happy as I am to see Harper “Bluebird” Rowe still being used, the Punchline half of the issue is only enjoyable for the visuals, making for one good-looking comic book.

I didn't expect to like this book as much as I do, but Francavilla and Boo make it visually stunning, even with protagonists that I utterly loathe.