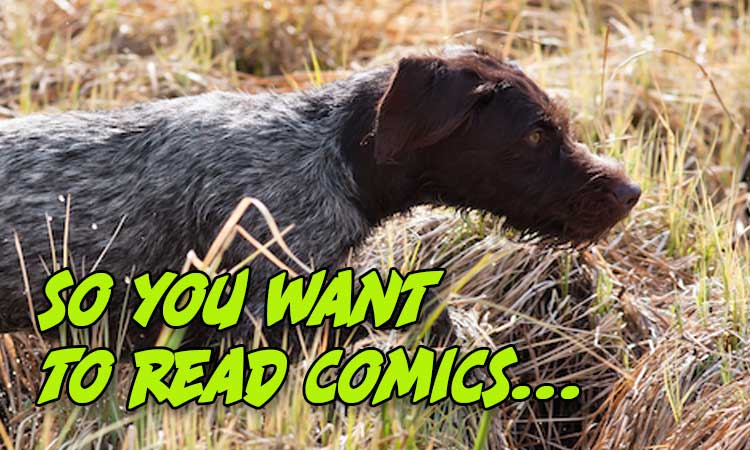 So You Want To Read Comics: Hunting Edition

Time to set your sights on the next installment of “So You Want To Read Comics”, our weekly feature where we take a look at a single topic, then offer a pair of comic book recommendations that are good for new readers, based on that topic.  This week we’re taking a look at the past time known as hunting.

Since the dawn of humanity, people have hunted down other animals as a source of sustenance.  Legends, myths, practices, and importance sprung up around this act, making the hunter an important and honored position in a lot of early civilizations.  Then when agriculture took over as the primary source of food for people, the concept of hunting for sport became a thing.  Today, in the US at least, hunting is still enjoyed by many people every year.  According to The US Fish and Wildlife Service, in 2020, there were over 38 million hunting licenses, tags, stamps, and permits purchased.  Speaking from personal experience, it isn’t that uncommon to find communities that have based a major part of their identity and economy around the various hunting seasons.  Needless to say, hunting is still alive and well, not only in real life, but in our favorite pop culture items as well.

Here are a couple of comics featuring hunting that are good for new readers.

Those who aren’t so new to comics, had to have seen this one coming.  Kraven’s last hunt is one of the most famous Spider-Man stories out there, and is often considered one of the best.  Featuring a relatively small villain in Spider-Man’s gallery of baddies, this has Kraven The Hunter, hunting down Spider-Man, taking him out, then donning the spider costume to prove he’s better than Peter Parker.  While many hunters speak of being a part of nature and playing a grim role in it, what we have in this comic series is a full on antagonistic relationship between the hunter and the prey.  This is the story of if Ahab had gotten Moby Dick, this is the culmination of a fixation and the obsessive nature that comes with it.  Basically, this is a story of what happens when a person devotes their entire life to the act of hunting and what happens when there’s no more worthy trophies to bag.  Featuring unusually realistic artwork for the time, this story manages to find the right balance between comic book shenanigans and deep introspection all within the framework of a hunt.

So, upfront, this does skew more towards an illustrated book rather than a full on comic book, but it comes from a company that does primarily comic books, so I’m taking it.  So, anyone who has ever sat through a hunter’s safety course or perused the 2nd hand book section of a rural antique store, might be familiar with the old guides they used to make to help people who were setting out to hunt.  This is just like those, except instead of giving helpful tips on how to field dress a whitetail deer, this will show you how to properly track down a mummy in the wild. It’s a bit tongue in cheek, which is par for the course for a company like Zenescope. Essentially what this does is what comics do best.  It takes a pretty common and mundane thing and kicks it up a notch with a silly amount of fantasy and some pretty fun artwork.  It’s silly, there’s no doubt about that.  But in the midst of all that silliness there is some decent writing here, that will trick you into reading 5 pages about all the variations on The Giant (spoilers, apparently gremlins belong to the same species).  For more traditional comic book action, check out the companion book to this one The Monster Hunters’ Survival Guide: Case Files.

What did you think of these recommendations?  Do you have any of your own?  Any good hunting stories? Let us know in the comment section below.