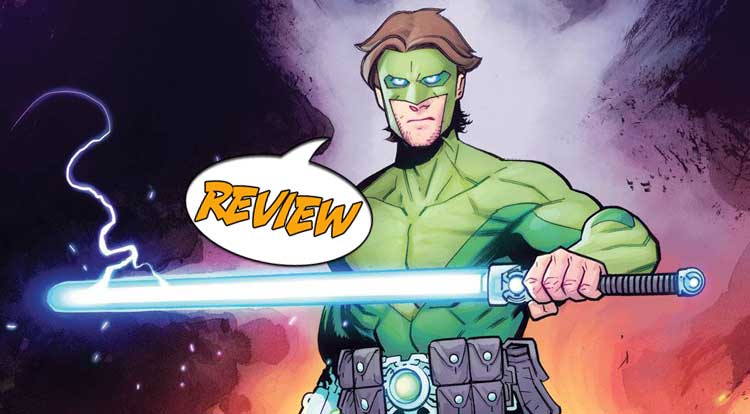 The Tenth Anniversary anthology from Robert Kirkman’s Skybound Entertainment chugs on, and Rick Grimes in a mask is maybe the LEAST weird thing in store! Your Major Spoilers review of Skybound X #2 from Image Comics awaits!

Previously in Skybound X: The second chapter of the wildest Walking Dead story ever – RICK GRIMES 2000! Plus, the debut of a major new Stillwater character, a surprising coda to the Birthright saga, and the first appearance of Everyday Hero Machine Boy!

Years ago (in The Walking Dead #75) Robert Kirkman presented the “explanation” of the zombies in the TWD reality: Aliens.  The lead story in Skybound X #2 picks up that thread, with Rick now a super-soldier, facing off against his former wife Lori, who has been transformed into a cyborg alien plaything.  The battle between lawman and alien is as bloody as you’d expect from the creative team behind Invincible, ending with a shocking return of a character thought dead.

The second chapter takes place in the world of Williamson & Bressan’s Birthright, featuring a battle, with Death (as opposed to a battle with death.)  It’s an exciting story told in the form of a letter home, after which we meet Everyday Hero Machine Boy (or, as I call him “The Exciting New Character Find of 2021!”) as he seeks to help the people of his home city, Mega 416.  And as for the strange little town of Stillwater, sometimes you have to let go of the things you love, no matter how much it hurts personally.

…STAY FOR EVERYTHING ELSE

As someone who loves the packed, giant-size comics of the Golden Age, I’ve always been a sucker for an anthology book, but the biggest problem with them has always been that the material is uneven.  There’s always one weak story or something that doesn’t work at all, and it tends to bring enjoyment of the whole package down.  Skybound X #2 avoids that by simply not having any weak spots.  Every story is wonderfully realized, from Zdarsky’s emotional ruminations on whether a life that never ends is truly worth living, to the over-the-top parody nonsense of Rick Grimes.  T

his issue provides no weak links, and all four stories succeed in different ways, each complimenting the other like the best anthologies.  Machine Boy’s debut is a cute story that I hope heralds a long series of cyborg shenanigans, featuring beautiful art and a heartfelt protagonist, and spurring me to put the upcoming solo series on my pull list based solely on this issue.  Even better, the final story has caused me to want to go back and read Stillwater, a book that fell off my radar after reviewing issue #1.

I was somewhat puzzled by the first issue of this book, but Skybound X #2 stick the landing creatively, providing a perfect balance of fun, melancholy, exciting and goofy that synthesizes into a perfectly balanced read, creating the comic book equivalent of pizza with everything and earning 4 out of 5 stars overall.  There’s a joyfulness to this carefully curated issue that makes me want to celebrate independent creators as well, and it makes for a wonderful anniversary gift for Skybound.  Here’s hoping the book can maintain this level of quality, because it could easily become one of my favorite reads.

It's a remarkably good issue, filled with a variety of creatives showing off some of the best reasons to make creator-owned comics. The debut of Machine Boy alone is worth your dough.