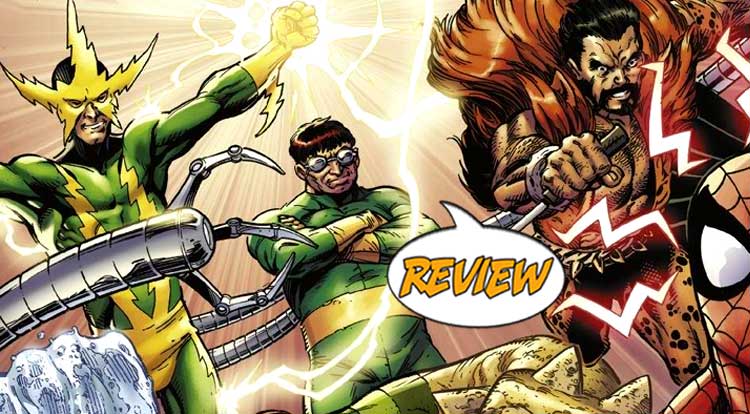 There’s a new Sinister Six in town…  but they forgot to tell the old ones!  And guess which Webhead is caught in the middle?  Your Major Spoilers review of Sinister War #1 from Marvel Comics awaits!

Previously in Sinister War: Doctor Octopus has got a new Sinister Six and if you think he’s thought big in the past, think again.  What Ock DOESN’T know is that the Vulture has a sextet of his own: The Savage Six!  It’s an all-out WAR between two of the greatest villains in the Marvel Universe, and the only person they hate more than each other is Spider-Man!

Spider-Man has gone to Doctor Strange for help, but the Sorcerer Supreme has found that there’s something wrong with his soul, a trail that leads to Mephisto!  At the same time, Peter Parker accompanies Mary Jane to her movie preview, only to have The Savage Six (The Vulture, The Scorpion, The Tarantula, The Rhino, Stegron and King Cobra) bust in and destroy everything in sight.  He manages to quick-change into his working clothes, but things get even more complicated, as MJ’s producer friend is revealed to be Mysterio in disguise!  Then, Doctor Octopus arrives to recruit Mysterio into his Sinister Six (Electro, Kraven, Sandman, The Lizard and himself, with one open slot)!  The villains battle spills out and leaves Spidey unconscious, awakening in the clutches of Kindred, the undead evil form of his old friend Harry Osborn.  Harry taunts our hero, reminding him that he there’s no kill like overkill, as all the other Sinister factions attack en masse!

WITH MEPHISTO WAITING IN THE WINGS!

For those of you keeping count, Sinister War #1 features three dozen villains in all, including two Electros, two Doctors Octopus and two Scorpions, sort of, as well as Overdrive, whom nobody has heard of.  It’s a whirlwind of costumes delivered at high speed, and while I kind of like the idea of united all the various Sinister factions (as well as the 666 motif), it’s… a lot.  Mark Bagley really makes the various explosions exciting, though, and I especially appreciate the attention to detail in these pages, like bringing in Speed Demon from the Sinister Syndicate of the 1980s.  There aren’t really any quiet moments to be had in these pages, but Bagley makes the confrontation between Dr. Strange and Mephisto in a Las Vegas-themed hellscape tense and exciting, especially the hints that all of this has something to do with the loss of Peter and MJ’s marriage back in the (Brand New) day.  The downside of the action and the sheer number of characters is that, even if you’ve been keeping up with Spider-Man, there’s a lot of threads being pulled together here, and I’m still a bit lost.

BOTTOM LINE: A BIT CHAOTIC FOR MY TASTES

Still, for any and all questions of clarity, Sinister War #1 kicks things off with an exciting opening salvo, bringing a lot of simmering plot points together and using damn near all of Spidey’s classic villains, with excellent art making up for a lot of the dropped plot moments, earning 3 out of 5 stars overall.  It’s a very ’90s comic, in the good way, and even if I’m not sure of or particularly interested in Kindred himself, the audacity of his huge plan here will have me coming back for the next issue.

Spencer's script is basically yelling at us for twenty pages, but there are interesting questions in the mix, and Bagley's art is amazing.