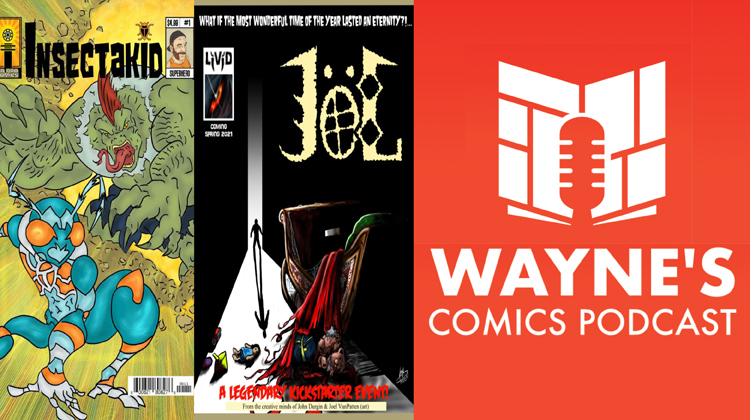 Time to talk with Michael K. Easton from Insectakid at So Pro Comics and the folks from Livid Comics (Joel VanPatten & John Durgin) from Jöl in Episode 495 of the Wayne’s Comics Podcast!

It all begins with Michael K. Easton, “The Illustrious One” from So Pro Comics who is artist and writer for Insectakid, and the first issue is now supported here. It’s adventure and heroics in the vein of Spider-Man, bringing fun back to comics! Here’s how the book is described: “Can Ronald P. Tramp, Hakeem’s coffee loving customer, help him discover his powers in time to stop the Reptilians?” We talk about the Kickstarter as well as what we might expect from Michael and Company in the months ahead! This project concludes tomorrow–Monday, July 19, at 7:33 a.m. EDT, so be sure to back them after this episode!

Then everything wraps up with my conversation with Livid Comics—specifically John Durgin and Joel VanPatten from Jöl (pronounced “yule”) and their Kickstarter at this link. Here’s how it is described: “Eight-year-old Will discovers a cube that teleports him to an unknown dimension between home and the North Pole in a fantasy/thriller comic.” Their project is doing well, but be sure to listen and then support them since their project will conclude on Wednesday, July 21, at 10:00 a.m. EDT. I love holiday comics, and this promises to be a great one!  Don’t miss it!