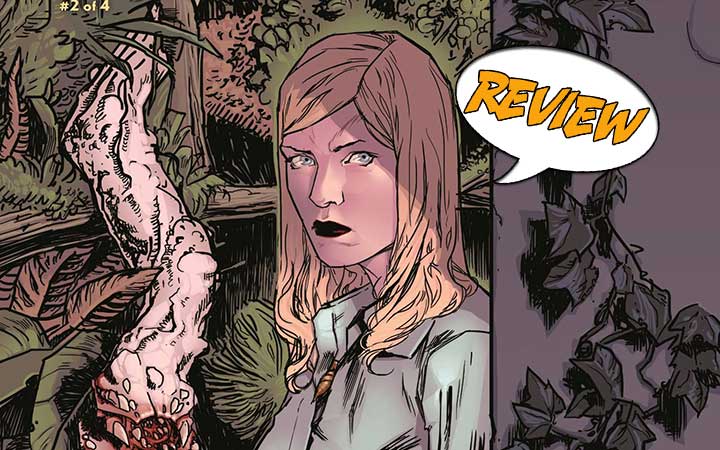 Kat’s message is received, and Ben finds himself on the way to Antarctica. Can Kat keep from being discovered as a spy? Find out in The Secret Land #2 from Dark Horse Comics!

Previously in The Secret Land: In the days of WWII, Ben and Katherine are a couple, but they are parted when Ben joins the Navy and Katherine, fluent in German, joins the OSS and becomes a spy. All they have of each other are matching seashells and the word “Aishiteru,” which means “I love you,” in Japanese. When Ben receives word that she is dead, he goes all out on a mission and becomes badly injured. But Katherine isn’t dead; she is on a U-Boat that goes to a secret base on Antarctica where she is part of the scientific team trying to get a Nazi device working. The device does seem to operate, but Katherine gets a strange flare of energy from her seashell. And she daringly sends out a secret message.

AT THE END OF THE WORLD

The Secret Land #2 is a terrifically tense tale of espionage among the Nazis. That said, it has a flair of horror as well, and is for mature readers. This is mainly for Nazi cruelty and torture at this point, and it can certainly get disquieting. The issue starts out quietly enough. After the War, Ben gets a civilian job in salvage. But one day a couple government agents show up, asking about Katherine Weiss.

Katherine’s message was received, and the top brass aren’t sure if it is legit. They have heard about Professor Hesse and his “Glocke” device, and they know Katherine was undercover as Hesse’s assistant. Ben arrives, hoping beyond hope that Katherine is still alive. The first thing they ask him about is “Aishiteru.” Kat is alive; the message is legit; she is in Antarctica. When asked if he will join a mission to go there and take on Nazis, Ben does not hesitate.

The word “Aishiteru,” has an almost psychic bond between Ben and Kat. Without warning, she sees him in her mind’s eye. In Antarctica, she is Katrin Schultz, and she has been so for long enough that her real self seems far away. She sits outside, talking with Julia. The mood at the base is uneasy. There have been suicides, and the General murders serfs as a general threat to others.

In the reactor chamber, Die Glocke is working, but Hesse does not understand how. The output does not match what his equations show. At this, his assistant, Dieter talks about seeing the real equations. When Kat and Hesse turn to him, he has extracted his own eyeballs, and Kat gets an eerie inner sense of glee and a sound like little bells.

On her half day off, Kat goes to the atrium, a hidden oasis of plant life at the base, but she thinks about the increasing taint of corruption that she senses everywhere, even here. In the shadows, we see a tentacle poking around. Kat does not see this, but she sees Julia giving something to a couple serfs, contact with whom is strictly forbidden.

Ben is on his way on a ship in the midst of a small fleet. This is 1946, and a trip to Antarctica takes some time. Meanwhile, Kat goes outside with Hesse where they enjoy a fire and the brillilant daytime sky. Hesse confides that he has been having nightmares. He also confesses his attraction to her. It has been years since she has seen Ben, and she is isolated here, but she tries to keep a hold of her real self too and puts him off. Suddenly they hear gunshots.

When they return to the base, an officer claims to be doing an endurance evaluation and “culling the herd,” by the order of the General. Katherine hears tiny bells. She knows, in her heart of hearts, that Vogel is not in charge of the base, but something else is.

The art of The Secret Land #2 can be beautiful, and it can be horrifying. I love the outdoor scenes in Antarctica. The landscape is remote and barren, but it is also pristine and lovely, a wilderness untrammeled by a human presence…until the Nazis showed up. The ocean has ice floes in it. I also like that against the majestic skies, we see some of the Nazi planes, or flying ships, which are incongruously modern in this setting. This is an alternate history intermixed with horror.

I also really liked the scene of Kat in the atrium. For being one of the few places, if not the only one, on the base that has living plants, it is surprisingly empty. The colors used for the plants tend to dark, graying and olive greens. While the plants look leafy and healthy, the color choice makes them look dark and oddly sinister. The long shadows, probably cast by the sun shining through the roof, are deep, as though anything could be hiding in them.

BOTTOM LINE: SETTING UP A RACE AGAINST TIME

Along with the overall mystery of Die Glocke, The Secret Land #2 does a remarkable job of capturing some of the sense of being a spy under deep cover, having to live a part entirely different from one’s own self and keeping that real self as hidden as possible.

Kat walks the tightrope of life as a spy, not knowing that Ben is on his way to her.