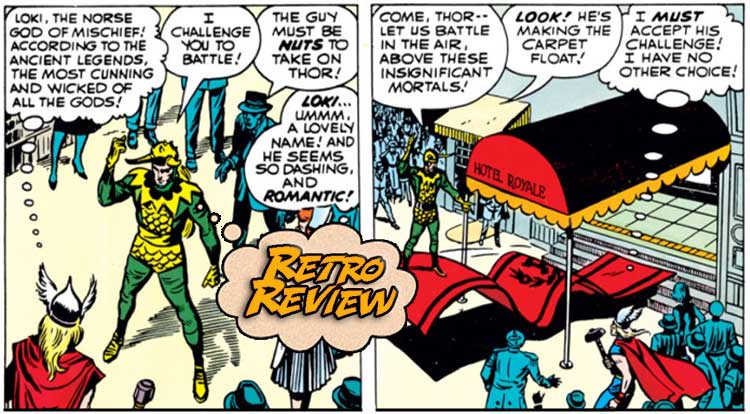 Now that we know there’s no chance of spoilering things for ya, what say we look at the genesis of Marvel’s latest TV superstar, Loki?  Your Major Spoilers (Retro) Review of Journey Into Mystery #85 awaits!

Previously in Journey Into Mystery:  When Dr. Donald Blake discovered a strange staff in a Norwegian cavern, he had no idea that it would not only save his life, but transform him into a living god of Norse myth.  Now, the down side of that life is about to come home to roost, as Thor’s oldest enemy has come to town seeking revenge!

Our story begins in the faraway land of Asgard… Thanks to another example of letter-of-the-law Asgardian magic, Loki manages to escape exile inside a tree tr5unk, setting out to find Thor, who is not yet his adoptive brother in this telling.  Given that their familial bond seems to be a Marvel Comics invention and not something that I can find in any of the eddas, it makes sense that he doesn’t refer to Thor as his brother.  Also, for those who have seen Loki, you can see how perfectly designed and comics-accurate Richard E. Grant’s battle togs were.  Tracking Thor to New York by locking onto the Uru of Mjolnir, Loki arrives and begins bewitching innocent bystanders, flushing out Thor, who is no match for his hypnotic powers. Unfortunately, it’s not that easy to deprive the Thunder God of his weapon.  I really enjoy seeing Dick Ayers inking Jack Kirby, as his precise linework really helps to ground Kirby’s powerful linework.  Dick also doesn’t take nearly as many liberties with the pencils as Vince Colletta would later, giving us some lovely crowd scenes and cityscapes throughout the issue.  In order to try and take out his not-yet-brother for good, Loki resorts to his favorite power, that of illusion! Though this issue’s story is credited to Stan Lee, the scripting is handled by his brother Larry, who doesn’t really share The Man’s way with words, making much of this issue’s dialogue very pedestrian and self-explanatory.  It is interesting that mortals not being able to lift Thor’s hammer is already a part of the mythos here in his third appearance, but that it’s credited to their lack of strength rather than Odin’s worthiness enchantment.  Once the hammer is out of his hand, though, Thor reverts to Don Blake, who is somehow NOT party to the hypnotic state that befell his other self, and grabs the hammer once more.  The transformation frees him from Loki’s control, and a battle of ridiculous helmets begins across the city! I admit, I’m not a Norse scholar nor a mythology expert, but I can’t find anything that indicates that Loki being disempowered by water is anything other than a Lieber creation, but it serves to end the conflict quickly and relatively painlessly.  Thinking quickly, Thor snares the God of Mischief while he’s disempowered, and goes for a literal Hail Mary pass. Or is that more of a Helblindi pass?  Bygones.  Either way, Loki is returned to Asgard to be taken care of, while Don continues about his normal human business, because he’s just a normal human guy, totally, you guys.  The most interesting part of Journey Into Mystery #85 is seeing the early-installment weirdness of the early Marvel Universe in play, with Thor using a fraction of his power and defeating his worst villain easily thanks to the East River, with Kirby/Ayers making up for Larry’s lesser prose and earning 3 out of 5 stars overall.  If you’ve never read these early Thor stories, it might be shocking to see such standard Silver Age superhero stuff, but it’s fun to see the building blocks of what would become the Loki we know, and also to find that Kirby had that costume dead-solid from the very first panels, reminding us of his design genius.

Larry's no Stan, and much of what would become an epic rivalry is still in the future, but Kirby/Ayers is always a fun art team, and it makes for a cute done-in-one issue with stakes that feel pretty realistic.