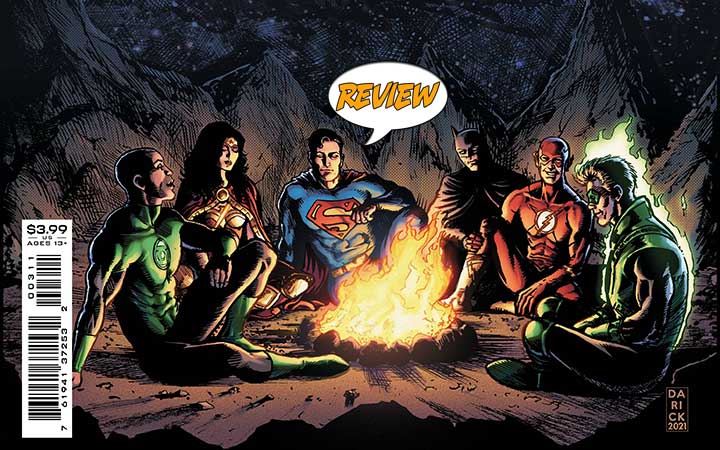 The JLA are hiding out on Apokolips of all places.  The only question is, who else knows they’re there? Your Major Spoilers review of Justice League: Last Ride #3 from DC Comics, awaits!

Previously in Justice League: Last Ride: The Justice League has reformed to help keep Lobo alive until he can stand trial.  In order to help with that, Batman has suggested the team hides on Apokolips, thinking that would be the last place anyone would come looking.

Justice League: Last Ride #3 opens up with the team arriving on Apokolips.  Batman suggests they hideout in one of Desaad’s old torture houses, thinking there would be something there to help keep Lobo secure.  The team then gathers around a campfire and have a nice moment where they seem to recommit to the ideals of The Justice League.  Hal Jordan is informed by Jessica Cruz that some of the members of the United Planets have put a massive bounty on Lobo’s head, most likely to cover up their connection with him. At night, Bruce has a dream where he kills Martian Manhunter, who then suddenly warns him that something is coming for them.  In the morning Hal is informed that someone has let it slip where they’re hiding and someone might be on the way.  The team splits up after a bit of arguing to prepare for an attack.

One of the things that this series has done well is depicting a realistic rift in the team, and that is on full display here in Justice League: Last Ride #3. Rather than have some overblown disagreement that leads to huge fights and killing as it’s so often seen in these sorts of stories, here we get a team that’s just sort of sick of each other’s nonsense, especially Batman’s and Superman’s.  Multiple times Batman’s broodiness and “master tactician” role is called out and criticized.  Superman’s status of being “the best of us” is called into question especially his inability to rise to that status.  This isn’t a team that’s going to kill each other, they still believe in the job they have to do, but they aren’t going to be buddies while they do it, and that’s a take that has room for exploration. It’s a shame then that the way they utilize this team and their dynamics, is kind of boring. All this issue is, is various members of the team talking to each other and the conversations aren’t very interesting.  Perhaps the most interesting is a conversation where Bruce tells Hal that because there’s other heroes out there, it might be okay for the Justice League to die. Other than that it’s all pretty standard comic book conversation stuff.  Lobo trying to get under Superman’s skin, Superman telling Lois that he’s thinking of her, Wonder Woman telling Batman and Superman they’re idiots. Basically this issue is more about making sure all the characters are in their proper place for when something bigger happens and not about pushing the plot forward in any meaningful way.

THE BOTTOM LINE:  WAITING FOR LOBO…OR ANYONE

Justice League: Last Ride #3 takes a nuanced and interesting version of these classic characters, and does basically nothing with them in this issue. Not that there needs to be a slugfest in every issue, but something more than quietly conversing with an occasional disagreement, would’ve been nice. Hopefully this series picks up soon or it’ll just continue to ride to nowhere. 2.5 out of 5

Justice League: Last Ride #3 decides to rail against its name and just sort of stands around, narratively speaking. The characterizations here are good, they just need something to do.