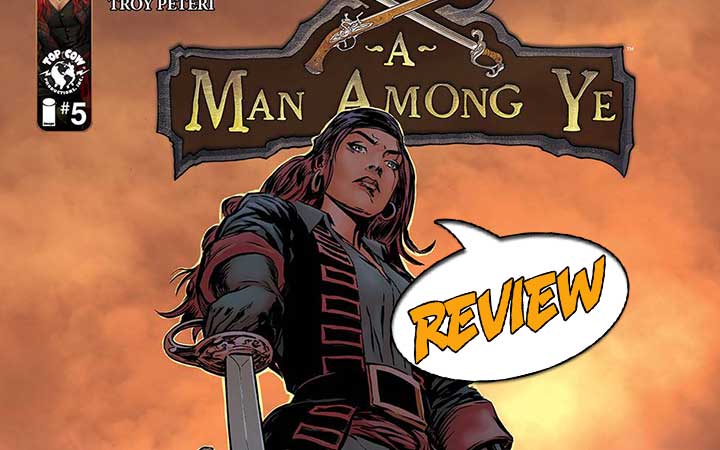 A Man Among Ye #5 Review

Anne and her crew have had a few days of peace, but they are all being hunted. Who will be the first to be caught, or at least found? Find out in A Man Among Ye #5 from Image/Top Cow!

Previously in A Man Among Ye: Anne Bonny has a plan to rescue Jack Rackham. They land at Fort Nassau where Jane Castor claims to have captured Bonny. Woodes Rogers takes Anne into custody – and invites Jane to dinner. In the middle of dinner, he gets a letter from Jane’s father indicating he will pay a handsome reward for her. As Rogers ponders this, Mary and Iris blow up his fleet. In the chaos, Jane slips away. Anne kills a guard and takes his keys. Freeing pirates along the way, she looks for Jack. She finds him, but he is willing to turn against her and kill her for the money he would get, and he shoots Anne. The women make their way to their own boat and escape.

THE CALM BEFORE THE STORM

It’s a new chapter in the life of Anne Bonny in A Man Among Ye #5. After their escape, they stopped for what was supposed to be a brief rest. Instead, Anne spends her time (and money) on drink and women, as a pirate does. Mary, Jane, and Iris are ready to leave, but Anne puts them off, saying she will be ready “soon.” Anne does not see the woman in the inn who points her out to someone who is looking for her, a woman named Amira.

Iris and Jane stop to watch a puppet show about Woodes Rogers and his scheming to kill pirates. Iris has been getting tense, and Jane accuses her of being in a bad mood. Iris feels she is the only one doing anything, namely tending to the boat and cleaning up after Anne. Jane talks about her sacrifices, such as wearing commoner’s clothes. It’s a pointed passage about white privilege, which was a thing even then, and it resonates with us today. Iris suddenly drags her aside. Before they can get completely away, they are attacked by a couple men out to get Jane for the money.

Anne and Mary stop by a swordsmith. Anne has found a lovely sword that she really wants. Mary reminds her that she has already spent most of the money they have, as mentioned above. A couple redcoats burst in to arrest them but Anne, who conveniently has a sword in hand, attacks them.

That’s two fights in different parts of town. Iris and Jane get free as they hear a bell ringing and see more guards running. They assume this must have something to do with Anne, and indeed it does, as the town descends into chaos.

AN ALLIANCE OF STRONG CHARACTERS

The four women at the heart of A Man Among Ye #5 are a study in contrasts. Mary Read has not led a sheltered life, but even after turning pirate, she carries more of a veneer of civilization about her. It is as though she is taking up the role of Anne’s conscience, something that Anne has perhaps had to leave behind since taking up life under the black flag. Iris and Jane are a pair of different contrasts. Iris has won her freedom, but it is a tentative thing that could end in a heartbeat, unless she makes it to territory where she is not vulnerable. Even in disguise, Jane wears her privilege like her blue cape, calmly expecting life to treat her well.

And while that is a triumph of subtlety, it is balanced by the thrilling action sequence. Not only is the fight choreography clear and dynamic, but the two fights in parallel escalate slowly and steadily, just as exciting as in many a pirate movie. The fight at the swordsmith is particularly fine. The redcoats have the advantage of surprise, but Anne thinks fast on her feet and flings a shovelful of hot coals at them before deftly spitting one of them on her borrowed sword.

BOTTOM LINE: A BOUNTY ON THEIR HEADS

A Man Among Ye #5 shows us that a pirate’s life is rarely dull, at least on land. Anne and her crew do not have an easy road ahead of them, not even considering that they really want to head in different directions.

Anne’s few days of relaxation are about to end in all-out melee!