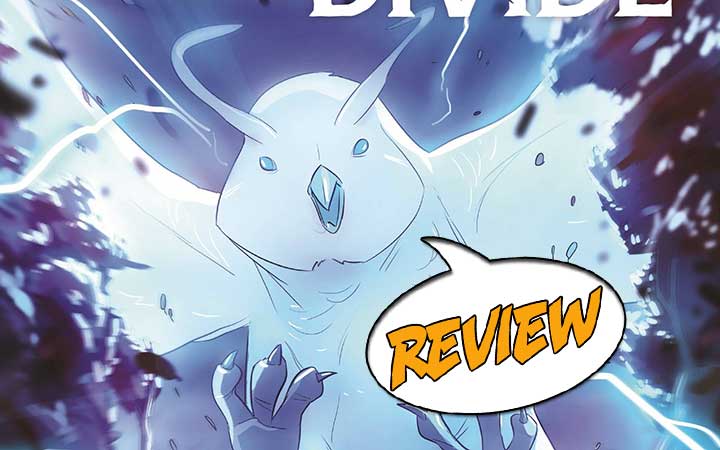 Rangers of the Divide #3 Review

The magnetic storm is terrifying, especially when a Squall Owl is on the prowl! But what does the Commander know that he is not sharing? Find out in Rangers of the Divide #3 from Dark Horse Comics!

RANGERS OF THE DIVIDE #3

Previously in Rangers of the Divide: Commander Knight sets out with the half dozen untrained Cadets. They reach an area with ruins, and Brandt races off to investigate and find a souvenir. Knights sends his sister, Bryce, out to get him back. Instead, Brandt insists on making a video, causing more delay. As the rest of the group waits, it starts getting dark, and a giant Squall Owl flies overhead. The Commander realizes that unstable weather is on the way and insists they must leave. Bryce and Brandt return just in time – or just a little too late. The sun starts to set and a magnetic storm blows up around them. They must find an area heavy in metal – and quickly!

RIDING OUT THE STORM

Rangers of the Divide #3 opens in the midst of a magnetic storm, which involves a lot of lightning, floating chunks of land, and relying on the dragons to stay safe. The Commander knows he could have avoided the storm, had he been alone. Elsie reminds him about the Squall Owl. She assumes it must be gone; his unspoken thoughts hint that it is probably still around. A lightning strike knocks Elsie and her dragon into the storm and the Commander catches a glimpse of Squall Owl wing. He heads off after her and orders the rest of the Cadets to stay put.

Knight follows the Owl, correctly assuming that it will be after Elsie, who has landed on a small floating island. As it dives after her, Knight attacks and drives it off. In short order it returns, smashing into the island and knocking them both over. It goes after the Commander. Elsie shouts a warning, and Knight manages to chop off one of its feet. Elsie thinks she sees a giant, humanoid shape below. Distracted, she gets knocked off her dragon.

This time, Knight is too far away to help. She glides on as fast as she can, and he directs her first to head straight, and then to drop. She does so, and the Squall Owl is caught between two floating boulders and killed instantly. Elsie’s dragon catches her, and they both make their way back to the Cadets.

The storm passes. The huge floating chunks of land start plummeting back to the surface, and Knight gathers up the Cadets. When they finally settle down for a while, Elsie talks to the Commander alone, asking him about the giant she saw. He says she must have been disoriented, and also that he has never seen such a thing – although his thoughts show that he is lying. At this rate, his lies are almost bound to come back and bite him. He rounds the young people up and keeps them moving until they reach the Barren Plains where they make camp.

Elsie talks to Ivan and tells him about the giant she saw. He trusts her, and he believes her.  Meanwhile, Brandt has a crisis of confidence. When Bryce talks to him, he admits he feels that he is likely not going to make it.

A WORLD OF EXTREMES

Rangers of the Divide #3 opens with a dramatic splash showing us the scale and craziness of the magnetic storm, from the lightning to the moving chunks of land. It is a little difficult to tell what demagnetizing means for the cadets, although it sort of looks like it involves touching down to the ground. This whole sequence is quite well done. I particularly like the way the background gets more blurred the further away it is, making the storm look hazy and as though the chunks of stuff moving through the air are moving fast. Seeing a glimpse of the Squall Owl’s wing peeking through the dark adds a sense of foreboding.

The dragons are so interesting, and even cute in a way. We see a tiny bit more of them in this issue, and I wish we could see even more. They seem to be pretty smart, based on how Elsie’s dragon behaves in the fight and is able to glide up and catch her when she dives. I also like how, when things finally settle down, the Cadets curl up near their dragons, leaning against them as though they do have a bond.

BOTTOM LINE: A LITTLE ROUGH AROUND THE EDGES

It seems there are still mysteries ahead in Rangers of the Divide #3. It’s a little frustrating to have a plot moving on in large part by the Commander just keeping things secret, even from us. On the other hand, the world is pretty interesting so far, so I am still curious to see where the story goes.

Rangers of the Divide #3

Life as a Ranger is more dangerous than any of the Cadets had anticipated.