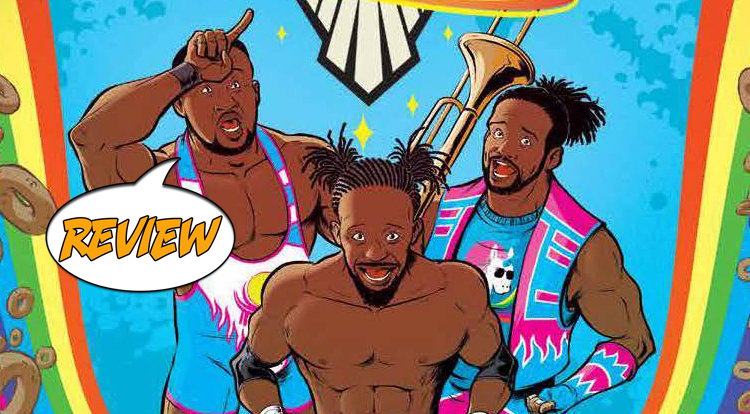 Previously in WWE The New Day: Power of Positivity #1:  Kofi. Xavier. Big E. Six-time. WWE Tag Team Champions! The. Longest. Reign. In. WWE History! You know the matches. You know the catchphrases. You think you know The New Day… but now discover the origins and struggles of these three WWE Superstars before that fateful day when they realized that they’re stronger together than apart and seize their place in WWE history.

WWE The New Day: Power of Positivity #1 opens with the members of The New Day in the ring, facing down The Shield (while only showing two of them, as the third has left WWE) and seemingly losing.  As things start to look their darkest, Kofi Kingston thinks “It can’t end like this!”  CUE THE FLASHBACKS!  We are shown a young Kofi, idolizing wrestler Ron Simmons in his Faarooq persona, hoping to work his way into the business.  We see a young Big E Langston, protecting the smaller kids in his school.  We see young Xavier Woods, mastering every video game with ease, but finding it harder to master his place in the world.  They all make their way to WWE, where Triple H assembles Big E and Kofi into a team, but they still can’t find their niche…  until Xavier arrives to remind them of the #1 rule: You need to have fun!  As the issue ends, they’ve finally gelled into a three-man team, but the evil Triple H seems to have designs on bringing the New Day down.

NOT SURE WHAT I EXPECTED FROM THIS

First off, this book is visually charming as heck. There’s a really fun, almost cartoony aspect to the facial expressions and figure work that fits the New Day’s upbeat, fun gimmick, and the use of exaggerated anatomy makes for fun as well.  Kofi is constantly in motion, Big E is a wall of a man and Xavier is hilariously changing costumes over and over as the situation warrants.  That said, the origins of The New Day as presented here aren’t actually the origins of the New Day, save for having these three men assembled by Triple H at some point.  It’s a fun story, one that provides entertainment value for certain, but it gives me kind of an odd feeling, like I’ve been reading propaganda or some sort of revisionary history.  Part of me thought that this would tell me more about Kofi Sarkodie-Mensah, Ettore Ewen, and Austin Watson, but in keeping with WWE style, it’s a different tale.  Not bad, necessarily, but not real.

It’s very hard to translate wrestling into comic books, but WWE The New Day: Power of Positivity #1 makes for a fun, if inconsequential, comic book experience with dynamic art and some nice buildup for an inspiring Rocky-style tale in the future, earning 3 out of 5 stars overall.  If you’re a New Day fan and you want to enjoy more of their trademark positivity, this book isn’t a bad way to get your metaphorical fix.

There are more than a few exaggerations and outright lies in these pages, but its energetic, well-drawn and sets up a conflict for our heroes to overcome. What more could you want?