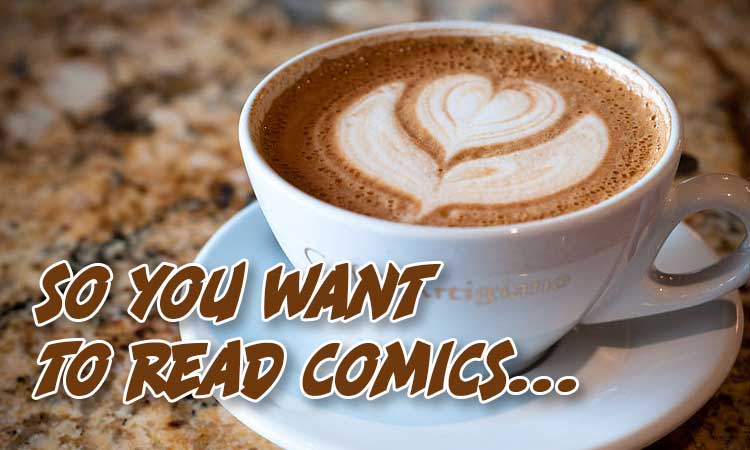 So You Want To Read Comics: Coffee Lovers Edition

The best part of waking up, is So You Want To Read Comics, a weekly feature where we take a look at a single topic and then offer up a pair of comic book recommendations, perfect for new readers, based on that topic, (in your cup). This week we’re taking a look at the comics for coffee lovers.

It doesn’t matter if it’s black, blonde, French roasted and pressed, cold brewed, iced, instant, or drowning in creamer, people drink a lot of coffee.  Everyday 2.25 billion cups of coffee are consumed around the world.  The drink is produced in over 70 different countries, the market for just the beans accounts for $102 billion.  UC Davis even has a center devoted to the teaching of coffee science and is looking to create a major program around it.  Not to mention the seemingly countless ways the drink is prepared by baristas across the world, a practice that rivals some of the most complicated culinary schools.  It’s only natural then, for this love of coffee to weave itself into the world of pop culture, from Quentin Tarantino bragging about how gourmet his coffee is in Pulp Fiction to Otis Redding singing about drinking coffee and smoking cigarettes. Even comics have gotten in on it, as you’ll soon see.

Here are two comic book recommendations for coffee lovers of all types, as well as people who are interested in getting into comic book reading, or both.

In coffee terms, the “crema” is the flavorful and aromatic froth that appears when air bubbles mix with oils inside ground coffee, during the brewing process for a cup of espresso.  In comic book terms, it’s a graphic novel about a young barista named Esme who falls in love with the heir of a coffee farm and granddaughter of the ghost that Esme recently started seeing.  Oh yeah, when she drinks too much coffee, Esme sees ghosts.  Crema is at its heart a nice love story set upon the backdrop of the coffee industry.  From a little coffee shop in the USA to a coffee plantation in Brazil, all the key moments of this book happen in proximity to coffee.  An added supernatural element just spices things up and moves this series out of cliché territory. The art here has a certain unpolished feel to it, which gives it a more independent look, just like your favorite coffee spot, you know the one.  The writing isn’t flashy or particularly intricate, but it does its job of pushing the plot forward to the end.  As a bonus, this is part of the Comixology Originals lineup, which means with a Comixology Unlimited account, you can read this for free (if you don’t count the subscription fee).

Too Much Coffee Man

The 90s were a great decade for coffee, and coffee culture.  Starbucks really started to take off, every sitcom that came out, had a coffee shop in it, and the fair trade movement really kicked off.  It was also a great decade for weird and satirical, single-page comics appearing in alternative press newspapers and independent publisher collections, like Too Much Coffee Man.  Too Much Coffee Man (TMCM), is a superhero who’s basically an anxious and jittery mess, who likes to wax philosophical, but rarely do his comics actually have him performing any superheroics.  Instead, TMCM is more concerned with commenting on strange political issues, the annoying parts of coffeeshop life, and a whole slew of other absurdities that come with living in a modern society.  There isn’t really a plot to these comics, as they’re similar to something like The Far Side as opposed to Superman. So really, a reader can jump in anywhere and have no problem getting it.  Also, unlike a lot of these types of comics that appeared during the 90s, Too Much Coffee Man is still being made online.  In fact, it’s had an online presence since 1995 making it one of the first webcomics. So, if you happen to be a coffee fanatic and willing to be poked fun at a little, this one could be for you.

What did you think of these recommendations?  Do you have suggestions of your own?  What’s your favorite way to take your coffee (black for me)? Let us know in the comments section below.