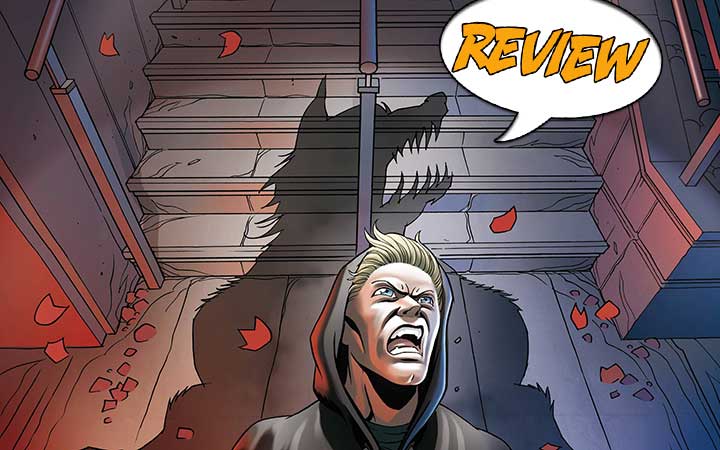 Miriam Stephanopoulos takes over an operation to break up a gang of thieves. But a couple things seem a little fishy. Could there be something supernatural going on? Find out in Rivers of London: Monday, Monday #1 from Titan Comics!

Previously in Rivers of London: Peter Grant is a police constable who is also a part-time wizard. There are crimes – and there are crimes. When things start getting weird, Peter or his boss, Thomas Nightingale, get called in. Miriam Stephanopoulos is a tough detective who has also had a lot of dealings with the Folly (the unit for dealing with the strange). So, when she gets assigned to Operation Willow and something unusual happens, she knows who to call.

ANOTHER DAY IN THE LIFE

Rivers of London: Monday, Monday #1 starts, most appropriately, on Monday morning as Mirian Stephanopoulos gets ready for work. She is the center of this issue, so the background narration is her thoughts. If you aren’t familiar with Rivers of London, it is a terrific series which is part urban fantasy and part police procedural, built around graphic novels as well as novels and shorter stories. Each story is complete in its own right, but together, they create a richly interesting world full of wonderful, often quirky, characters.

Stephanopoulos has been put in charge of Operation Willow, an anti-street robbery task force. Since the thefts can be quite random, the police set up a “shop” for stolen goods in the hopes of apprehending some of the culprits. But when the officer in charge of the shop doesn’t remember anything and is on medical leave, and all the CCTV cameras nearby simultaneously stopped working, Miriam assigns one of the men (Billy) to liaise with the Folly.

Meanwhile, PC Judith Hua finds a camera shot of one of the young thieves. She and DS Jasmine Cross go to King’s Cross Station, get lucky, spot him, and catch him. As they do this, Miriam reviews the files more. Street thieves need a warehouse to stow their goods, and they’ve had lines on three prospective ones, but every time they’ve raided one, it has been cleared out. Stephanopoulos smells a potential rat.

Peter Grant comes in with the news that there is magic all over the incident with the “shop” for stolen goods, but he cannot tell whether it is related to her Operation or not. He wants to question the young man (Kyle) they apprehended. In the meantime, Stephanopoulos looks over the people she is supervising. She is smart, clever, and devious, and she thinks things over as she listens in on the questioning. Peter gets two addresses from Kyle.

Stephanopoulos gets to work. She sends Billy off with Grant. She sends Judith and Jasmine off to put one of the addresses under surveillance and asks them to text her once they’re in position. Then she calls in DS Anthony Boyer. She has noticed that, of all of them, he has a good suit and handmade shoes – unusual on his salary. She wants him to get a search warrant so they can go into the address Kyle gave them as soon as possible, hopefully tomorrow.

He leaves. She considers timing for him to get to his car and make a call. Within seconds after that, Jasmine calls in. People are vacating that address. What a way to start the week.

The art of Rivers of London: Monday, Monday #1 is solid. A lot of care has been taken with the characters. After all, this is a police procedural at heart, so much of the emphasis is on the people. Stephanopoulos is just as she is described in the novels, short-haired, stocky, and utterly no-nonsense. Her body language radiates this throughout. I like that the issue starts and ends with scenes of her at home with her wife, though. It’s fun to see her relaxing and not being entirely police all the time.

The settings are great, both indoors and out. I would think some photo references would have had to be used, because there is so much detail. The police station is full of computers and paperwork and stuff up on boards on the wall. Stephanopoulos’ office has glass walls, so practically every panel has to pick up on how much stuff there is. And the scene at train station shows it from a couple angles, including long shots with other buildings in the background. I have not been to London yet, but I imagine that these are spot on. There are also a lot of people there, doing all the things people do, including reacting to the action.

I love the novels, but Rivers of London: Monday, Monday #1 nestles wonderfully into place in the greater world and brings it to life visually in a way that is exciting yet still grounded. I can’t wait to see more.