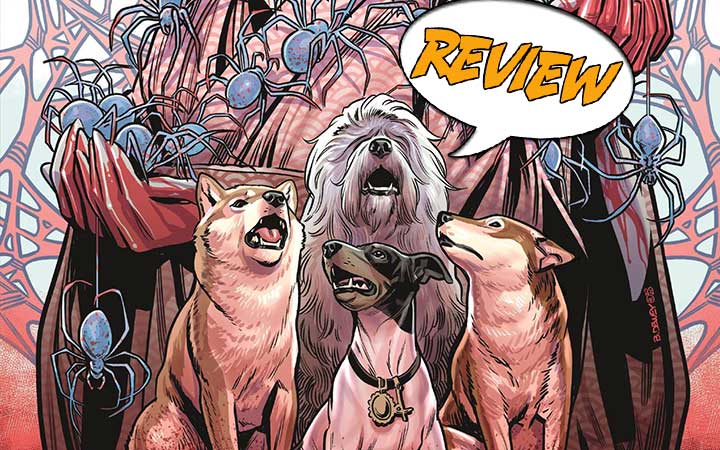 Emrys and friends approach the lair of the Great Lady Tsuchigomo. Why did she cast the curse, and will she lift it? Find out in Beasts of Burden: Occupied Territory #4 from Dark Horse Comics!

Previously in Beasts of Burden: Occupied Territory: Emrys and his companion traveled to Japan to investigate supernatural happenings. Emrys and Mullins, a local stray, track the scent of the monsters. In a confrontation with an Oni, they meet two temple guardian dogs, the Shiba Inus, Makoto and Yuna, who have powers of their own. Yuna calls for the Council of local Yokai to ask for their help. They confirm that what is going on is due to a curse which is a grudge against humans, and the Yokai feel the grudge should be allowed to run its course. So it is only the dogs who go forward, where they are attacked by two Jorogomos as well as several disembodied heads, and Mullins gets bitten!

ALONE AGAINST THE OTHERWORLDLY

Beasts of Burden: Occupied Territory #4 opens as the dogs reach the Zou Valley, once lush, but now broken and desolate. It is shunned land, but this is where they must go. Mullins wakes up. Emrys tried to heal him, but he can only slow the curse; he cannot lift it. Only the Lady who cast it may lift it. Mullins is weak, but he agrees to keep going. All the dogs’ power reserves are low.

Under a dead tree they find a heap of Yokai heads. Near them they spot something familiar – the body of the Oni they ran off not long ago. Just as Emrys wonders if it still has its head, the disembodied head of the Oni scrambles out on its tentacles and attacks. Emrys, Makoto, and Yuna all use their powers, but to no avail. Only by combining their forces with a vortex to slow it down, phantom monkeys to distract and annoy him, and a fire spell directly into the mouth can they kill it. But this depletes their power.

They reach an area covered in massive webs – the Silk Labyrinth. This is the legendary home of Lady Tsuchigomo, the mother of all spiders. But she was supposed to still be in hibernation for another three centuries. As the dogs are slowly surrounded by her attendants, the Lady Tsuchigomo herself arrives. Makoto asks her to withdraw her curse – and she refuses. As her attendants move in to attack, he begs that she hear them out.

Instead, she tells them why she did it. She had been hibernating and was awakened early by being caught and severely injured in the blast of an atomic bomb. She wove a curse to destroy all the humans so she could heal in peace. The problem is, Yuna explains, that her curse is affecting more than just humans – animals and even Yokai are affected. They continue to talk with her about these unintended consequences, and she concedes that her anger may have made the curse too powerful. She agrees to think on it more in her continued hibernation – but withdraws the current grudge for now. I love that the dogs were able to find a diplomatic way to end this.

As they leave, Mullins starts wondering about what will happen when she wakes up. Will she still be mad? No one answers, and he looks around to find the other three caught in a web by three Jorogomo sisters. The web has some kind of soporific, so Emrys and the Shiba Inus are helpless. Mullins bravely attacks, and one of the sisters hits him with a club. But then the Yokai show up. They had spies watching the dogs, learned about the deaths of Yokai, met, and agreed to act.

Emrys winds up his story. He and his companion had returned to Japan to visit Makoto and Yuna and their companions, and they had visited him and continued to keep in touch. But of course, the question they (and we) were all wondering about is, “What about Mullins?” He returned to the States and lived with Arthur, Emrys, and Huxley. Huxley gives a lead in that makes it sound like there are a bunch of Mullins stories to hear.

Alas, not yet for us. But this has been a brilliant story. I like the idea of exploring the consequences of human actions in a world with powerful, magical creatures. And I really loved exploring the Yokai, and how the Japanese equivalent of Wise Dogs were interesting and different. The exciting thing is that this opens up a world of possibility for more tales throughout history and even from around the world.

The art of Beasts of Burden: Occupied Territory #4 continues to be excellent. The dogs are just wonderful. The challenge with them is to find the way to give them expression that we, as humans, can identify, while still keeping them believable as dogs. I hadn’t really thought about it until now, but Emrys presents the additional challenge of being a sheepdog whose eyes are always covered. With him, it’s all in the mouth and the body language. It works, and the dogs are convincing.

The fight with the Oni head is full of magic and terrific action scenes. We’ve seen the individual powers the dogs have, which sets up this battle perfectly. There are a couple panels that are done in silhouette which are nonetheless absolutely clear at continuing the action. It is a short transition to where they meet Lady Tsuchigomo and she is terrifying. There is a close up of her eyes that I love. Not only does she have eight spider eyes, but in the large ones we see the reflection of the dogs. It’s a really neat detail.

Beasts of Burden: Occupied Territory #4 wraps up Emrys’ story very well. I love that it is not just a great tale, but a thoughtful one that has ties to real history, which somehow takes a tale of the supernatural and makes it feel as though it could be real.

Emrys finishes his tale and we learn that actions have consequences, some of which may be unintended.