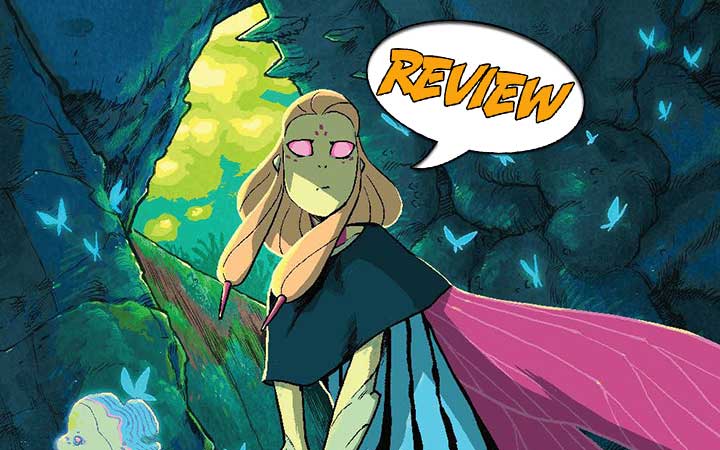 Wynd and his friends make their way to the Faerie city of Escalion. Can they get away from the Vampyres? Find out in Wynd #8 from BOOM! Studios.

Previously in Wynd: Basil gets Ash and Titus out of prison to go on a secret mission for the Queen. She wants to get word to the Duke about the King’s alliance with the Vampyrium. Basil doesn’t know the outside world, but he trusts Ash and Titus to guide him. In the ocean, one of the ships heading for the Duke explodes as the Vampyres attack. Wynd flies to shore with Oakley and a badly injured Thorn. Yorik and Bastian are brought ashore by boat. The crew try to rescue more survivors. Fortunately, Bastian is a medic and Wynd flies him up to the clifftop and Thorn. Yorik has to walk up with Teek. Bastian stitches up Thorn’s wound and Oakley spots the Vampyres landing. The young people regroup, but now time is of the essence. They should be within a day’s walk of the Faerie city of Escalion, but the Vampyres can hunt by scent.

The title character may be able to fly, but as Wynd #8 opens, he is chased by armed men with insect-like wings who net him in sticky fibers like spiderwebs. A young, and very cross, Faerie approaches him. Her mother was on the mission to get Yorik, and she is the one who was shot down. Wynd quickly tells her about the Vampyres, and that the Prince, the Duke’s son, and a hurt friend of his are all still in the woods. He apologizes for her mother’s death, but his adoptive mother is also dead, and here he is, in way over his head. She takes him ahead to Escalion and has the armed Faeries look for the others.

Oakley marvels at the forest and asks if all the forests in Esseriel are like this. Bastian says that these are the oldest trees in the world, planted as a garden for the Four Winds thousands of years ago. Yorik sees some Sprytles and insists they need to protect themselves. Bastian says they’re harmless as long as you don’t let them touch you. Teek even draws sketches they trade with friends. Yorik is still nervous and convinced that there is something out there that wants to kill them. The Faeries arrive to take them to Escalion. There are no Vampyres in the area – yet – but there are other frightening things in the woods.

In another part of the woods, Basil, Titus, and Ash have made camp. Ash pretends to sleep but is actually writing a note. Titus hears something and wakes him up. It is a large spider known as a Faerie-Catcher. The two men dispatch it, Ash comparing it to the spiders he has in the greenhouse, just bigger. Then he insists on throwing the body into the river before its eggs hatch. Basil worries that if the body washes up against the gate in Pipetown, it will give them away, but doesn’t see that Ash uses a knife to pin his note on the creature, a note to King Yossar.

Wynd awakens in Escalion with a painted ceiling above him. The Faerie who brought him in tells a story that starts with the Four Winds who created everything in the world, and then their creation of the Winged Ones. This leads to another story which tells the origin of the first Faerie and the first Vampyre, and the start of their eternal conflict.

The Faerie guards return with Wynd’s friends. He asks if he is a prisoner. He is not; he may greet his friends, but she wants to come with him. She also assures him they have healing magic that should save Thorn. She wonders if the Prince will follow her lead when they report to the Council of Elders. Wynd thinks of Yorik. Indeed, Yorik doesn’t want bug people touching him. He wants to see who is in charge. He is upset that they took Thorn and no one is telling him anything.

Then he sees the Faerie. Suddenly we see him pour on the charm, almost as much charm as Bastian has.

But the Vampyres are still on the trail following the scent of Thorn’s blood. General Zedra orders her men to bring in the Chain Blades to wipe out the city. Her thought is to start the war, but make it look like the King of Pipetown is responsible.

THROUGH THE WILD, ANCIENT FOREST

Wynd #8 is set well beyond Pipetown in the lands of the Faerie. The art has a lot of fun with this, from the Faerie guards who shoot webs to the dark enormity of the trees and the woods. This is a land calculated to instill a sense of wonder, and we see this wonder through the lenses of each of the young people who plainly see it differently. For Yorik, this is a hostile place full of untold dangers. To Teek, it is a charming place that they want to share with friends who can’t be here.

One of the touches I really like is that whenever we see the wounded Thorn, there is a ribbon of red that floats up from him and winds around in the air and throughout the landscape. This is the scent of blood from his wound. It is invisible to his companions, but we know that it will be as clear to the Vampyres as it is to us, which is a clever way to increase the tension without putting everyone as on edge as Yorik is.

BOTTOM LINE: CHALLENGING THEIR OWN EXPECTATIONS

Wynd #8 continues to be wonderful with a plot that is becoming ever more intricate. There is a lot more world building here, but with the extra length of the issue, there is plenty of room for it.

Wynd and friends slip away from the Vampyres and into the hands of the Faeries.