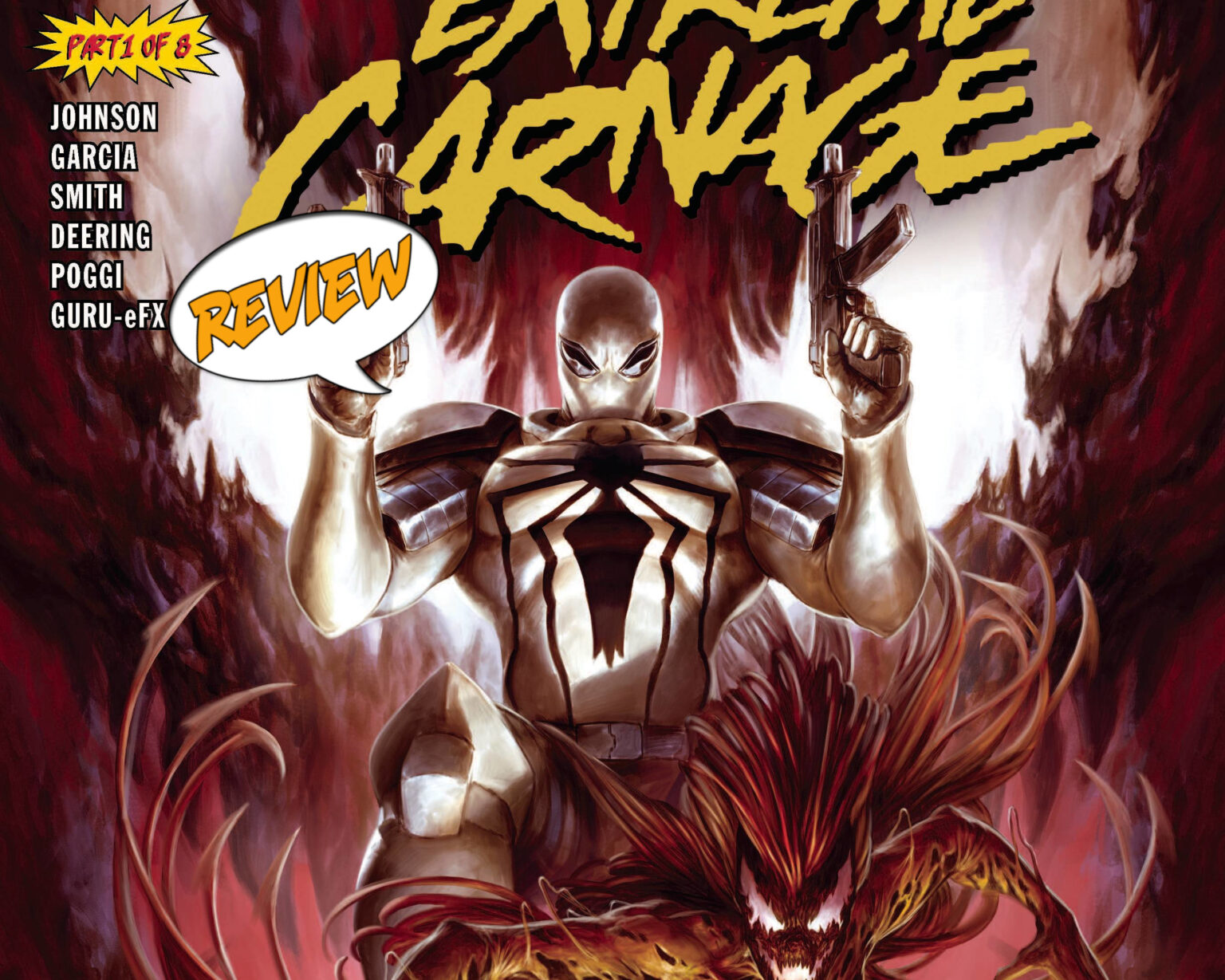 Carnage is back! Will the other symbiotes be able to handle the return of Carnage so soon after the defeat of Knull? Find out in Extreme Carnage Alpha #1 by Marvel Comics!

Previously in Carnage: Carnage is the spawn of Venom and Eddie Brock who took Cletus Kasady as its host. Together, they massacred anyone who was in their way. However, Cletus has killed and the Carnage symbiote is looking for a new host.

Extreme Carnage Alpha #1 opens at a rally with Senator Peter Krane. His platform is getting rid of aliens, both the good and bad type. He is working with Alchemax and the Friends of Humanity to help with his plans. Meanwhile, we are shown the path Carnage takes, who was deep in the ocean. Carnage chooses a fish for a host and then attacks a shark. He eventually moves up the food chain and arrives on a fishing boat and going on a killing spree and heading slowly to the United States.

Flash Thompson is working at a homeless shelter and keeping a low profile. However, he could feel the return of Carnage and unintentionally turns into his Agent Anti-Venom form. This gets the attention of Iron-Man who recruits Flash for a mission. Both of them associate a string of murders to Carnage and they think Senator Peter Krane is Carnage’s target. Flash goes to a rally to protect the Senator, but he realizes that Alchemax has set a trap for him. And on top of that, Flash realizes that Carnage was at rally His host was the Senator himself. Flash recruits army veteran Hank to help him take down Carnage before it is too late to stop Carnage.

EPILOGUE TO THE KING IN BLACK

We finally see some the consequences to the King in Black storyline. Being able to see people react to the event is a fresh change of pace. However, Extreme Carnage Alpha #1 takes this to a level that is very close to home. This language on the dangers of aliens is very reminiscent of language being used in modern day context. Which makes it seem like the symbiotes are becoming an analog for immigrants. Which doesn’t feel right, and I wonder how intentional this is supposed to be. If this is the route the creative team are trying to take the theme, then good on them for tackling a hard topic but I’m not convinced yet that this is the intent. I’m looking forward to the next issue to see if the theme becomes any clearer. Plus, Scream seems to be the next featured symbiote and that sounds like a lot of fun.

Every time I read a Venom/symbiote comic, I’m always impressed by the art. The design of the symbiotes always looks amazing on a comic book page and Extreme Carnage Alpha #1 is no different. Carnage and the various symbiotic hosts jump off the page, which is in stark contrast with Agent Anti-Venom who has a much more reserved character design. Great work by the artist.

While Extreme Carnage Alpha #1 tackled a theme that I wasn’t expecting, it is still a well-written and well-drawn comic. The art is amazing and dynamic, and I am interested to see Flash Thompson assemble this team to take out Carnage. I’m excited to see where this story goes next and a 4.5 out of 5 stars from me. And this comic is coming out weekly, so I don’t have to wait to long for the next issue!

Extreme Carnage Alpha #1 introduces familiar characters but adds an unexpected and complex theme to the story.