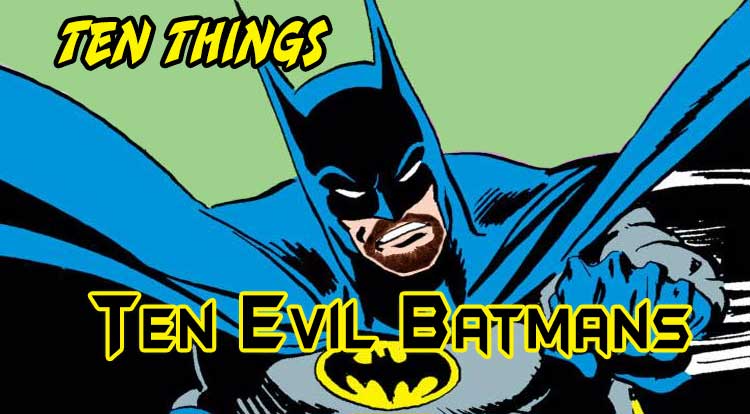 They say every hero has their equivalent villain. Some heroes are more visible than others. Welcome to Ten Things: Ten Evil Batmans!

Whooshman-Bicarbonate Films, in conjunction with An Amateur Comics Historian and waaaay too many characters with ‘Dark’ in their nom de guerre, Presents: A member of the Squadron Supreme on Earth-712, Kyle Richmond is very clearly an analogue of Batman, just as his partners in the Squadron are all pastiches of DC supers. Though heroes on their own world, the Squadron usually serves as antagonistic foils to the Avengers, but seldom full-on villains. That’s not the case for Nighthawk, who fell under the influence of evil telepaths and got himself elected President and took over the world. Only the interference of the Defenders kept him from completing his Overmind’s evil goals, and even then, he almost defeated them be pretending to be THEIR Nighthawk, showing his Batman-style cunning. On the alternate world of Earth-10, the grandson of Hans von Hammer, full name unrevealed, serves with the evil New Reichsmen, an evil Justice League. Like his Earth-0 counterpart, Leatherwing seems to have no superhuman powers, which makes his high stature even more impressive, as their overlords show no compunction about killing threats to their rule. Indeed, it took the defection of Overman, their world’s Kryptonian, to fully turn the tide for the Freedom Fighters and Axis control of Earth-10. In a temporary alternate reality created by #TimeTravelShenanigans, Thomas Wayne saw his son Bruce gunned down, not the other way ’round. Unlike Bruce, this Batman has no problem with killing, using lethal force as a regular occurrence, including finding and beating Joe Chill to death with his bare hands. Though his reality was erased, this Batman was saved by Reverse-Flash and transported to the mainstream DCU where he allied with Bane to torment his Bat-son into quitting the masked vigilante business.

It didn’t work, but you knew that. On Earth-32, where most of the heroes are mash-up amalgamations of two prime-Earth l heroes, Bruce Wayne received a Green Lantern ring and became the protector of Sector 2814. The resulting Bat-void was filled by another billionaire with no day job, one Lex Luthor, who partnered with the Super-Martian in an alternate World’s Finest team. When confronted by the prime Luthor in his Apex Lex persona, Batman rebuffed his offer of a team-up and even fought off his alter, then set out to warn his partner Kal, a Martian/Kryptonian hybrid.

Now, I know what some of you are saying: He didn’t do anything evil! But if years of comic book reading have taught me only one thing (and I’d estimate that’s about right), it’s “Never trust a Luthor.” He’ll come back and be evil soon enough, you can count on it. A member of the Crime Syndicate of Amerika in the anti-matter universe of Qward, Thomas Wayne, Jr. chose to fight fire with fire, conquering the criminals of Gotham City from within and taking over their rackets. Teaming with other evil counterparts, Owlman rules his world through intimidation, murder and criminal chicanery, clashing with the Justice League on multiple occasions. He is one of about six different variations on Owlman, dating back to the Silver Age, all of whom count as evil Batmans, but only one of whom could make the cut today. Silent, enigmatic and masked, Black Noir (whose name is French for “Black Black”) is a member of The Seven, whose identity is secret even to his teammates. This proves to be a problem when The Homelander (who is an evil Superman-type) is driven further and further into madness by images of atrocities that he doesn’t remember committing. The truth comes out when Homelander tries to overthrow the U.S. government and Black Noir unmasks to reveal himself to be an even more unstable Homelander clone. Murder inevitably follows but, to be fair, you can say that about any issue of The Boys. In the wake of Batman’s shocking death during Final Crisis, Harvey Dent is one of several who want to capitalize on the city’s lost protector. Unlike the former Robins, though, Harvey wants to take over the criminal syndicates and wipe out The Penguin, his primary competition. Knowing his old enemy so well, he quickly figures out that Nightwing has replaced Batman, attacking him in the Batcave itself. Sadly, as far as I can tell, this awesome costume is just a hallucination created by Nightwing/Batman’s drugged senses because it’s the best-lookin Bat-suit in literally YEARS. So, in this case the evil is less murder and more copyright infringement, a much lesser crime. (But as Sir Simon Milligan will remind you, EVIL NONETHELESS!)

A musical take on the Dynamic Duo, heavily influenced by the 1966 Batman series, Alyas Batman En Robin was made in 1989 to ride the crest of Burton Bat-mania, but didn’t get released for a couple of years due to litigation. An unauthorized Filipino production, it in turn referenced another unauthorized film from 1965, making an amusing Ouroboros of trademark issues. The best part is that the film isn’t about Bruce Wayne at all, but a couple of average Filipino Joes named Bruce and Kevin who don the costumes to fight crime. Superman, Tarzan, Wonder Woman, Zorro and a little person Spider-Man also make appearances during the various dance numbers. On Earth -52 (that’s a negative sign and not a dash, bee tee dubs), Bruce Wayne lost multiple sidekicks in the line of duty, overwhelming him with grief and regret over the crimes he was too slow to stop. To right this wrong, he out-maneuvered his world’s Flash, kludged together the Cosmic Treadmill with his Batmobile, and drove into the Speed Force with the dying Flash tied to his hood. The unholy atrocity worked, merging him with The Flash and sending him on a murder spree across Gotham City, with the disembodied Flash forced to watch in horror. He was collected by another evil cosmic Batman and dragged into the regular Multiverse as one of the Dark Knights.

The very existence of that League of Evil Batmans should finally prove that not EVERYTHING is better with Batman. A grotesque parody of some of the worst parts of The Dark Knight Returns, Frank Miller’s return to writing Batman proves the old adage about going home again. In the course of the ten increasingly late issues of the series, he steals a 12-year-old orphan, brutalizes criminals, has ridiculous, impossible sex with Black Canary, doesn’t quite edit out all the curse words and makes for a truly unreadable whole, even if he does slap down Hal Jordan along the way.

I mean, he tried to make Robin eat rats to survive! This man is evil, my friends. Poorly written, not-worth-the-wait evil.

Once again, this week’s topic, Ten Evil Batmans, is all me, but feel free to follow along @MightyKingCobra to suggest your own! There’s always more Ten Things madness on my Twitter or check out the full Twitter archive here! As with any set of like items, these aren’t meant to be hard and fast or absolutely complete, if only because Batman isn’t going anywhere and neither are his various knockoffs. Either way, the comments section is below for just such an emergency, but, as always: Please, no wagering!