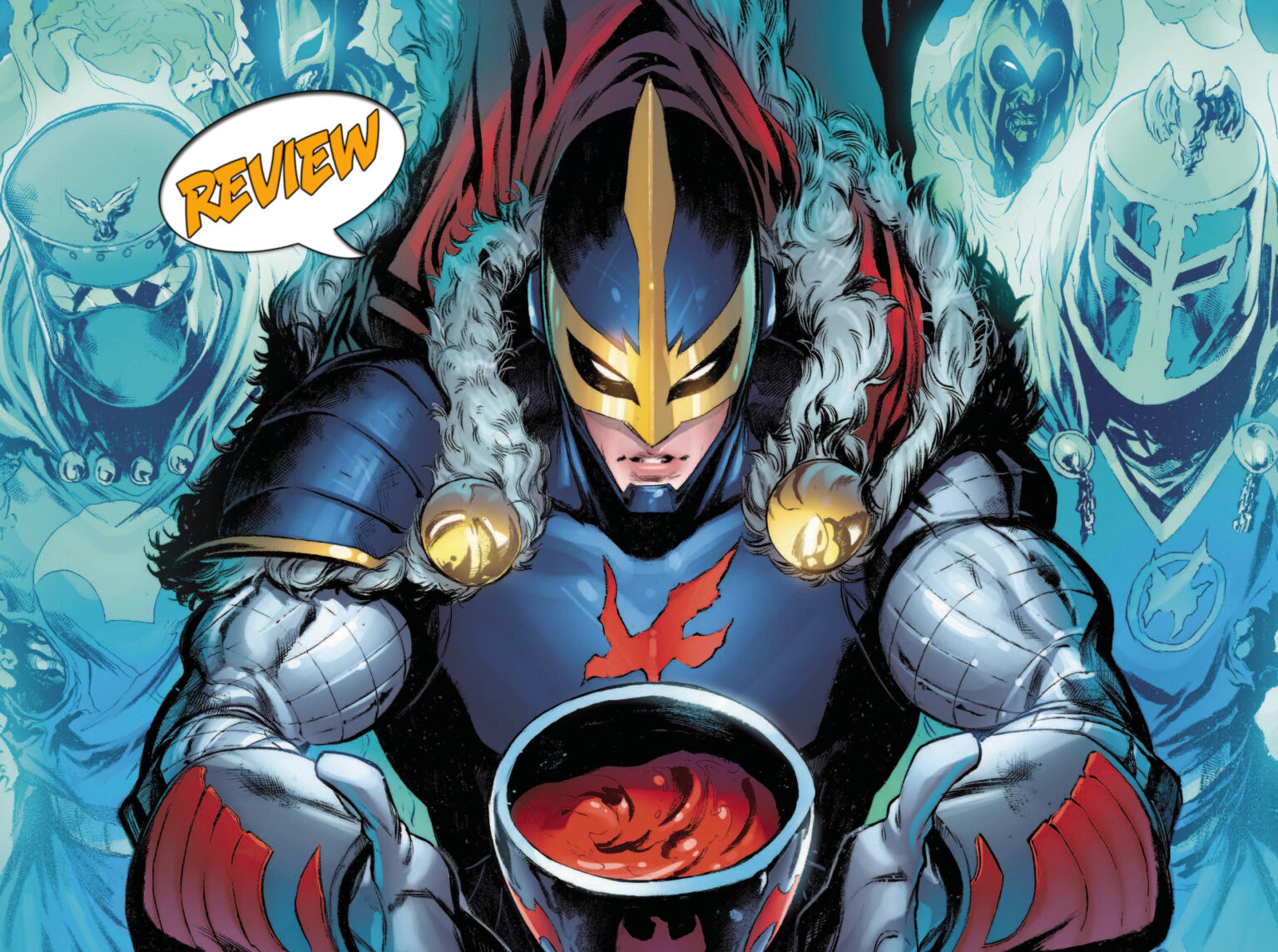 Mordred is after the Ebony Artifacts and Dane Whitman must rely on the Ebony Chalice to learn Mordred’s secrets. What will happens next in Black Knight: Curse of the Ebony Blade #4 by Marvel Comics!

Previously in the Black Knight: Dane Whitman is trying to learn the secrets of King Arthur, Merlin, Sir Percy, and Modred. He, along with Elsa Bloodstone and Arthurian scholar Jacks, have gotten the Ebony Chalice. But the power of the chalice comes out a terrible cost. Mordred, however, has the Ebony Dagger and Shield and is trying to obtain all the Ebony Artifacts to finish a fight that began long ago in Camelot.

SINS OF OUR FATHERS

Black Knight: Curse of the Ebony Blade #4 showed Dane Whitman the truth he seeks, which included his own death. However, that doesn’t stop him from going forth to fight Mordred with Jacks and Elsa. As soon as they arrive, Mordred kills his Redcap and hands Elsa the bloodstone to pay her off and Elsa leaves. Dane is left to fight Mordred alone and he slowly learn the secrets about what happened in Camelot.

If you are familiar with Arthurian folklore, then what is revealed isn’t a surprise. Mordred was born of an incestuous relationship between Arthur and his sister. Mordred was thus kept hidden and would be the last person in line for the throne. Dane also learns that Sir Percy was a monster, and every Black Knight slowly went crazy. Dane Whitman decides that he doesn’t want to succumb to his anger and drops the Ebony Blade, giving Mordred the chance to stab him. Mordred, now in possession of all the Ebony Artifacts forges the Ebony Crown and declares himself King, but not before killing Jacks.

LOOKING GRIM FOR OUR HEROES

Black Knight: Curse of the Ebony Blade #4 really pushes us into the action and gives us a lot of background information. While the big reveal of everything is interesting, I was saddened that the Redcap’s death and Elsa’s departure was so quickly glossed over. There wasn’t a chance for the reader to process what was going on and both characters felt prevalent to the story. Enough to get more space to be written out. My guess is that Elsa will return in the miniseries finale, but I can’t be too sure.

This issue propels us to the climax of the story. Mordred has seemingly won and next issue we get to see what he plans to do with the Ebony Crown. At the moment, Mordred’s motivation is looking for his father’s love and I wonder if that theme is going to return for the final issue. Dane is also looking for some sort of love and recognition. He fights that same evil daily that Mordred is currently succumbing too, and I imagine the finale is going to have these two characters act as a mirror to each other.

The story and art of Black Knight: Curse of the Ebony Blade #3 is amazing and worth the solid 4.5 out of 5 from me. The themes of family and looking for parental recognition is relatable and makes Mordred a compelling villain. On top of that, Dane Whitman and Jacks have been solid characters throughout this story, and I hope that they get the happy ending they deserve.

The Curse of the Ebony Blade has been an interesting series that explores the psyche of Dane Whitman, Jacks, and Mordred. What we have learned in this issue will certainly give us a thrilling conclusion at the end of the miniseries.