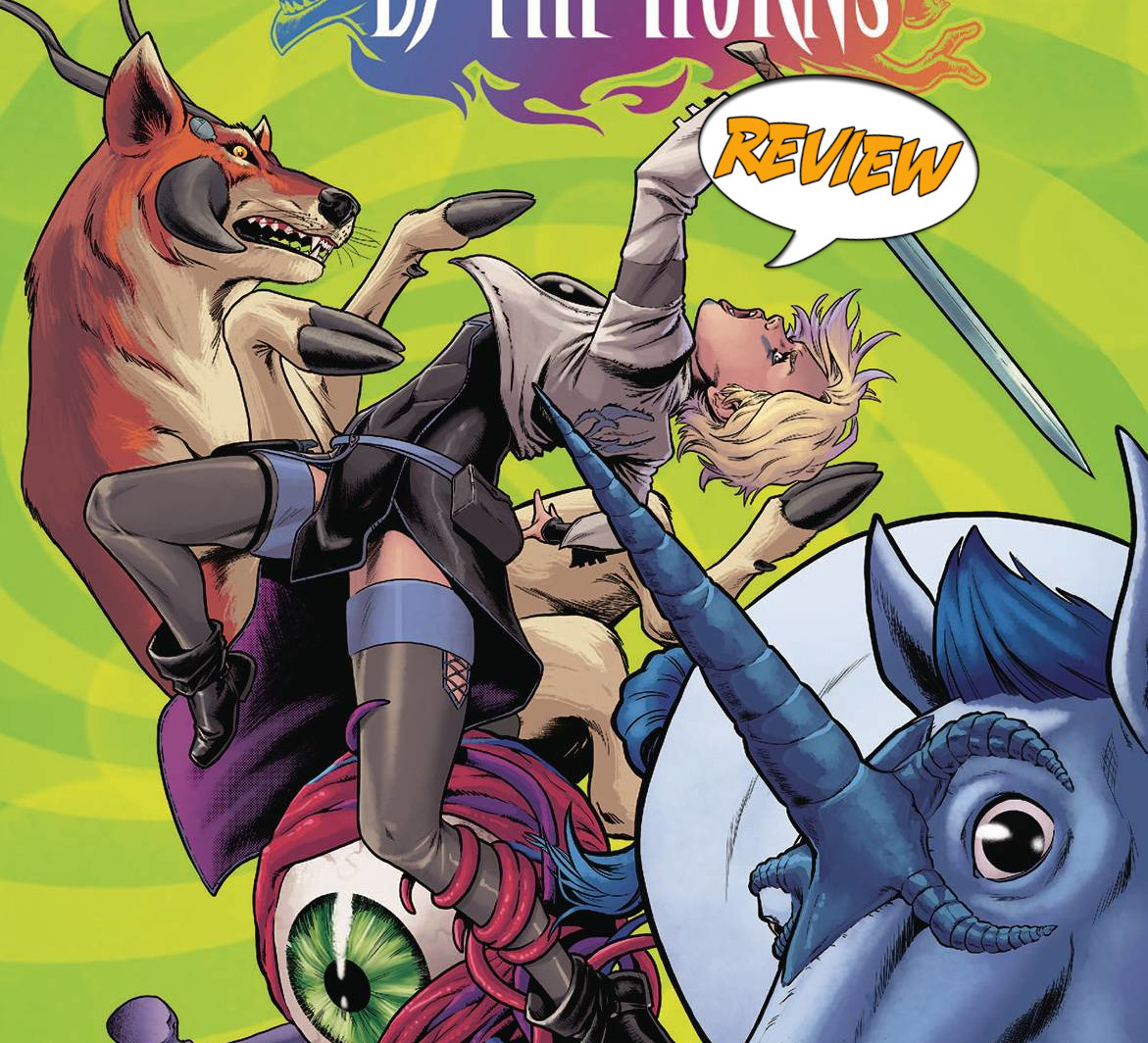 By the Horns #3 Review

Elodie is on a quest to kill all the unicorns. Suddenly, she was forced to work with unicorns to defeat a sorcerer. Find out if Elodie will befriend these unicorns or succumb to revenge in By the Horns #3 by Scout Comics! Previously in By the Horns: Elodie and Sajen were on a quest of revenge on unicorns for killing Elodie’s husband. In their travels, they are forced to fight the western wind mage but were too weak to defeat him themselves. Only through the help of two unicorns, Zoso and Rigby, were they able to overpower their foe. Elodie has given them a day before she tries to interrogate and kill them.

By the Horns #3 starts with Elodie purchasing a gun. Evelyn, a floating eyeball, informs them about three other evil sorcerers and the atrocities they commit. Elodie doesn’t have much motivation to save the world and ultimately prepares to kill her unicorn saviors. Sajen on the other hand confronts her. Without the unicorns power, she would be unable to kill these sorcerers and it seems that sorcerers are trying to kill all kinds of magic beings, including Sajen. Elodie decides to put aside her grudge momentarily to help her friend and teams up Evelyn, Zoso, and Rigby to fight the other sorcerers and save more people.

The quintet travels a bit and often get on each other’s nerves. But they finally arrive at the ruins of Dio. Dio was decimated by one of the sorcerers, who ransacked the village for magical items and creatures. Elodie and crew tracks the culprit to the Blackfire Forest and prepares for battle. Meanwhile, Elodie’s hometown of Wayfarer is about to be attacked by monsters of their own.

I enjoyed By the Horns #3 a lot more than previous issues because we are starting to introduce other themes beyond “revenge”. I think the theme of freedom was the most prevalent to me because both Evelyn and the unicorns have escaped their prison. Now we get to see what they have choose to do with that newfound freedom. Evelyn chooses to do good and help people defeat these ancient sorcerers which provides an excellent foil to Elodie who was single minded in her revenge. This is the relationship I am most interested to see on the page. How will Evelyn challenge her party? On top of that, the character design of a floating eyeball is done incredibly well.

I am continually impressed with the setting. This issue introduced an assortment of creatures and an odd combination of technology and magic. In one page, we see a legless, wood-sprite and then see a weird mechanic vehicle Sajen is pulling. I want to understand more about how these elements play into each other. The creative team created a world with guns and sorcerers but have not explained yet how they work in tandem. Looking forward to learning more!

The first two issues of By the Horns was solid but didn’t think it was a story for me. Issue #3 got my attention and entertained me in all three of my readings for this review. Great work here and I think there will be a lot of good stories coming from the rest of this miniseries. By the Horns #3 is a 4.5 out of 5 from me. Waiting anxiously for the next issue.

The introduction of Evelyn provides a great foil for Elodie and I am excited to see where they take both of these characters next issue.