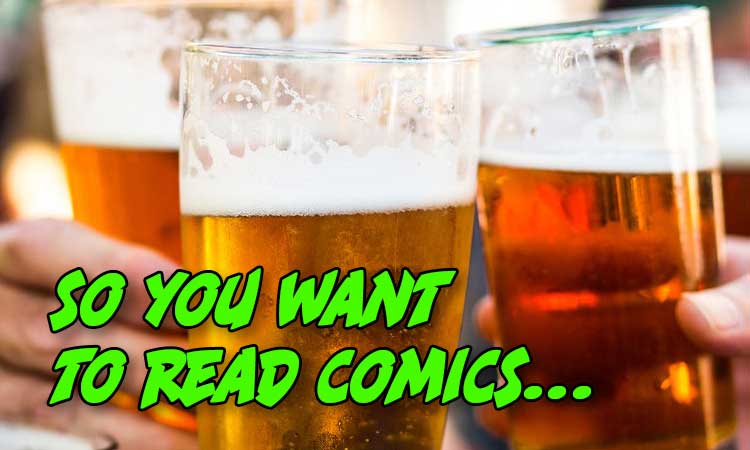 So You Want To Read Comics – Alcohol Edition

Bottoms up, it’s time for So You Want To Read Comics, our weekly feature where we take a look at a single topic and then recommend a pair of comic books, perfect for new readers, based on that topic.  This week we’re taking a look at everyone’s favorite (second favorite?) adult pastime, drinking.

This may come as a surprise, but humans have been drinking alcoholic beverages for a very, very long time.  Believed to be one of the first alcoholic beverages produced, a fermented drink of rice, honey, and fruit was found in China that dates back to around 7000 BCE.  Since then, alcohol has prominent roles in cultures, mythology (looking at you Norse mythology), historical events (Lincoln’s bodyguards were getting a drink when he was shot), and even determined the outcomes of battles (it had a role in the Battle of Itter Castle, the strangest battle of WW2).  There are even college courses out there dedicated to the art of mixing alcoholic drinks together. On average, the world consumes roughly 15 liters of alcohol for every person over the age of 15.  This puts the amount of alcohol consumed in the billions of liters. It’s hard to find something as globally appreciated, celebrated, hated, and explored as the act of drinking.

But, where do you go if you want to enjoy drinking without actually doing it? Say, in a comic book form? These two recommendations should do the trick.

The Dead Rabbit Mixology & Mayhem: The Story of John Morrissey and The World’s Best Cocktail Menu

This long titled, and very red graphic novel is one of the most unique ones out there.  One part cocktail recipe book, one part history book, one part guide to owning one of the most famous cocktail bars in the world, and one part hyper-violent collection of comic book tales about 1800s New York gangs, murderers, and tough guys; This collection certainly pushes the medium into spaces it rarely goes to.  Now, the actual comic book portions of this collection aren’t deep thoughtful pieces, but they’re mostly fun in the way gratuitous, root for the bad guy, stories can be. The drinks on the other hand are complex concoctions that really flex this bar’s reputation as being top tier in the cocktail world.  Fans of mixology, and/or the folklore nature that certain drinks have, will find something appealing here.  Be careful though, gathering all the ingredients needed to make every drink in this book could become a pricey endeavor.

The Comic Book Story of Beer: The World’s Favorite Beverage from 7000 BC to Today’s Craft Brewing Revolution

Now, while this article is about drinking in general, when it comes to the amount of alcohol drank in the world, beer holds a massive lead in popularity.  In 2019 189.05 million kiloliters of beer were guzzled (it’s unclear how many millions Wisconsin accounted for).  So, it’s safe to say that there are a few beer fans out there, and maybe they want to see the history of their favorite drink in pretty picture format.  That’s where this (also long titled) graphic novel comes in.  Just like the name says, this is the history of beer in the world in comic book format.  That may sound a bit dull, but thankfully beer actually has an interesting history.  What we get here is a pretty straight forward telling of some key moments in the history of beer, with some flare and a few jokes thrown in to spice things up.  It does lean more towards the educational side of things.  But that’s not necessarily a bad thing, especially if you’re a beer enthusiast.

What did you think of these recommendations?  Do you have some suggestions of your own?  What’s your favorite drink (if you’re of legal drinking age)?  Let us know in the comments section below.