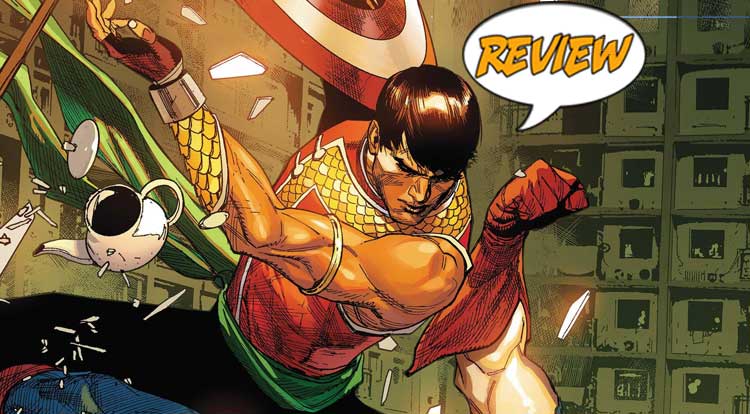 It’s hard to balance a superhero life with family commitments…  especially when your family is as unique as Shang-Chi’s.  Your Major Spoilers review of Shang-Chi #2 from Marvel Comics awaits!

Previously in Shang-Chi: There’s a Cosmic Cube for sale, and everyone from Hydra to AIM to the Hand is ready to pay up for it.  But Shang-Chi and his Five Weapons Society might outbid them!  Unless a certain Star-Spangled Avenger has anything to say about it…

With his evil father finally out of the way, Shang-Chi has taken control of the Five Weapons Society and has vowed to use their resources to make the world a better place.  Having found out about the auction of a Cosmic Cube, he and his half-brother Deadly Sabre arrive at the underground auction only to find the likes of The Hand, Hydra, and AIM bidding against them.  (M.O.D.O.K. is pretty hilarious, too.)  Thanks to some chicanery, they end up being outbid by The Hand, but before they can do anything about it, Captain America himself arrives to take back the Cube.  A fight immediately breaks out, forcing The Captain and Shang to fight each other.  The Master of Kung-Fu snags the Cosmic Cube and makes a run for it, with ninjas, even scientists, and stormtroopers hot on his heels, but when they catch up with him…  he isn’t there.

Of course, he’s not the only one who can use the Cosmic Cube for his own ends.

The revelation that Cap and Shang manipulated all of this from the beginning is a refreshing take on the whole “superhero undercover with the villains” schtick, and Shang’s use of the Cube is quite ingenious.  Unfortunately, the woman that Deadly Sabre loves is also involved, which leads to another secret Cube feint and a betrayal by our hero’s own brother. Shang-Chi #2 ends with an unknown person offering to help her destroy the Five Weapons Society, while the solicitations promise Wolverine next issue.

Yang’s script is twisty and complex in all the right ways, pulling off several moments where what the readers see isn’t entirely what happened, and doing it in a way that doesn’t feel like a cheat.  The art of Dike Ruan helps immensely, providing stylized visuals that remind me a bit of David Aja, with bits and pieces that feel like Leinil Yu and an overall finished style that’s really attractive.  This volume of Shang-Chi is ready to put our hero at the forefront of the Marvel Universe in preparation for his upcoming solo film outing, and I have to say, they’re doing a great job with it.

When you put it all together, Shang-Chi #2 is an attractive book (Shang’s trademark red in a three-piece suit is a nice change of pace after years of him being shirtless and barefoot) that manages to manipulate a lot of players in a satisfactory manner and pulls off the Captain America guest-spot without overshadowing our hero, earning a better-than-average 3.5 out of 5 stars overall.  As far as I’m concerned, Shang-Chi is among Marvel’s most impressive heroes, and I’m glad to see the creators of this book understand that.

Shang's new family business positions him to deal with the most dangerous and important parts of the Marvel Universe, and this issue takes on the unenviable task of making it all work, and they totally pull it off.