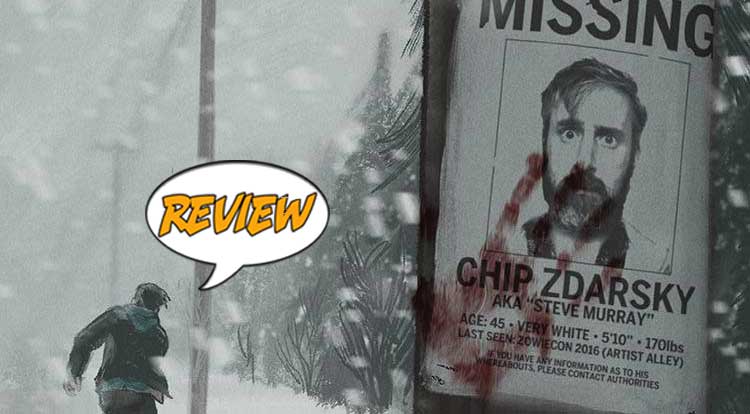 Things are about to get weird.  Well...  weirder.  Your Major Spoilers review of Crossover #7 from Image Comics awaits!
Review

By Matthew Peterson on July 5, 2021 0 Comments
Things are about to get weird.  Well...  weirder.  Your Major Spoilers review of Crossover #7 from Image Comics awaits!

Things are about to get weird.  Well…  weirder.  Your Major Spoilers review of Crossover #7 from Image Comics awaits! Previously in Crossover: Multiple worlds have been imperiled.  Dozens of heroes have teamed up.  The secrets of the crossover are still unknown to everyone.

So, this seems like a perfect time for something completely different.

Somewhere in Canadia, in a small village diner, a man is getting yelled at by his boss for messing up order after order.  Returning to his hotel, he calls his wife to check in, letting her know that he’s okay, indicating that something is after him with lethal intent.  “My real name is Steve Murray,” he says, but as he enters a comic store, the other shoe drops.

“Are you Chip Zdarsky?”

Over a beer and some coffee, Chip unloads his terrible tale: Something has been hunting down comic book creators, something that’s already gotten Bryan K. Vaughan and sent him on the run.  The belief is that it’s the characters themselves crossing over into reality, and Chip knows that he’s done some terrible things to his characters in the name of drama.  On the walk back to his motel, he remembers one character that he created back in Sex Criminals #14, a moment where he and his co-creator went meta, leading Steve Murray to come face to face with his most dangerous creation…

Crossover #7 is a fascinating rumination about the nature not only of the creative urge, but the nature of online personas.  Real Chip talks about the creation of his Chip persona and the accompanying character in an incredibly touching way, and when comic Chip reveals that he’s there to protect him, it’s almost sweet.  The whole issue makes for a metatextual joy for me as a reader, taking the premise of the Crossover series to date and making it something entirely different.  It’s as if DC’s old Earth-Prime concept suddenly got a realistic facelift and I’m totally into this.  The art is also really good, with Hester and Parks delineating a realistic world that nonetheless makes it clear which Chip is the real and which is the fictional, and also hides just which of his characters is tracking him down (but I think it’s Elektra.)

In short, Crossover #7 has some really lovely and subtle art paired with a story whose layers have layers, given that the Chip who I’ve been referring to as Real Chip is just as fictional as fictional Chip, and the last page reveal that he’s gone to Christian and Deena from Powers for police protection makes a promise that this story is going to be even weirder than I expected it to be, earning 4 out of 5 stars overall.  I have no idea what happens next, but I know that I’m going to be reading this book to find out.

Rather than a return to superheroes battling against destruction, we get a personal look into the mind of Steve Murray that deepens the story so far and makes the premise of Crossover that much more unusual, with a truly shocking last page reveal.