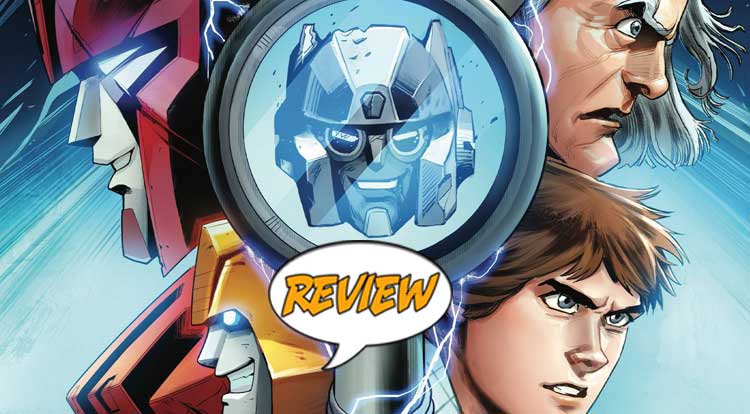 Transformers/Back To The Future #4 Review

Two of the most corrupt forces in the universe have aligned: The Decepticons… and Biff Tannen!?  Your Major Spoilers review of Transformers/Back To The Future #4 from IDW Publishing awaits!

Previously in Transformers/Back To The Future:  Outmatched by the Decepticons, running on empty, and on the ropes, Marty McFly and the Autobot Gigawatt show why nobody calls them chicken!  Will the final confrontation be in Marty’s future, or will he and his companions make it back to fix the timestream before the Decepticons win?

IT IS THE YEAR TWO-THOUSAND-FIFTEEN

Having made their way to the future to save the McFly family, Marty, Doc and Gigawatt have discovered that things are even worse than they thought.  The Decepticons have allied with evil future Biff, and have disguised one of their own as the Hill Valley clock tower!  As the giant robot runs roughshod over the remaining Autobots, Doc and Marty race to fix Gigawatt’s flux capacitor, hoping to change the past and save their world…  Unfortunately, Gigawatt is badly wounded by a blast from the evil Watchtower and can’t get up to the 88 miles per hour necessary on his own.  Skillz, a Transforming hoverboard, gives Gigs a push, but he and Doc Brown are left behind in the future, perishing at the hands of the Decepticons.  Arriving at the past, where Rumble has stolen Doc’s time machine, Marty and Gigawatt engage the evil robot, but are overwhelmed, until unexpected help arrives…

GREAT SCOTT, THIS IS HEAVY

As a child of the era being revisited here, I find the story of Transformers/Back To The Future #4  to be terrifically entertaining, but a bit sillier than most BTTF installments.  Of course, it’s more serious than the cartoon Transformer adventures, striking a comfortable middle ground that serves mostly to show off new robots with our old friends.  The story is a bit hazy on a couple of matters (like when Gigawatt and Marty awoke the Autobots in 1985), but that doesn’t really matter thanks to the pacing and genial demeanor of the events being shown.  Samu’s art is fun, bridging cartooniness and fidelity to live-action quite well, and while the likenesses aren’t exact, they’re good enough that there’s never an issue knowing Biff, Marty or Emmett.  The titular Transformers also look really good, even cartoon-accurate, which is the hardest part of any book based on the franchise, so it’s visually a winner, though I find the coloring to be a little be more cartoon-derived than the art it’s enhancing.

The biggest effect of this book for me is a desire to own the toys of Gigawatt, Skillz and Watchtower, meaning that Transformers/Back To The Future #4 did its job from an ’80s perspective, but the cleverly paced story and well-done art make it even more of a treat, earning 4 out of 5 stars overall.  You may not see this book held up alongside Maus or the works of Will Eisner, but it’s a fun comic that still feels like is has real stakes and makes yet another good crossover out of two properties that seem somewhat ill-matched, and that in itself is an achievement.

It's neither fish nor fowl, but I'll be darned if it's not a fun story when it all shakes down. You might even get surprised, which I didn't expect.