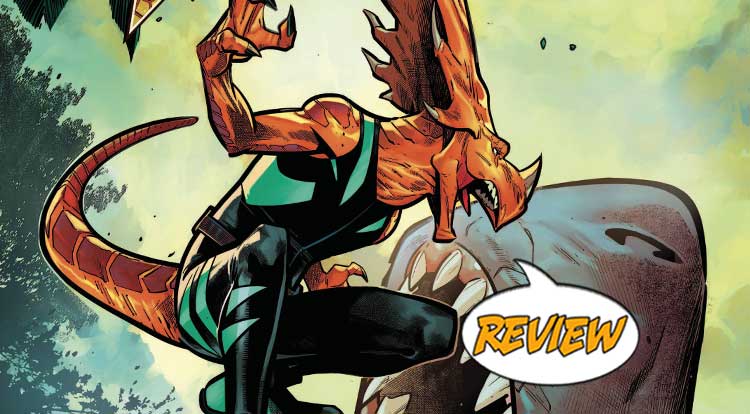 Will Reptil give up his amulet of power to save his missing parent?  Can he doom them to keep his powers?  Your Major Spoilers review of Reptil #2 from Marvel Comics awaits! Previously in Reptil:  Reptil’s clash with the mysterious Megalith has left Reptil’s head ringing and mind reeling as he struggles under the weight of a startling revelation about his family!  Now, as the threat of Megalith looms in the background, Reptil must race to uncover the secrets of his amulet – but without full control of his powers, will Reptil be able to protect his cousins as the trio make the dangerous trek into Dinosaur World?

THE SECRET OF MEGALITH

The opening scene of Reptil #1 is a sweet one, flashing back to Humberto Lopez’ childhood with his paleontologist parents.  Beto quizzes his mom on dinosaurs (which, by the way, gives a chance for the creators to drop some real dinosaur knowledge into the story), and she reminds him that she and his father love him.  Smash-cut to the present, where Reptil’s battle with Megalith has ended with the villain claiming that he knows where the Lopez parents have ended up.  Before he can follow up on that, though, stone monsters attack at the villain’s command, allowing Reptil to take the form of a Quetzalcoatlus, his mother’s favorite dinosaur.  The villain escapes, but his cousin Julian recorded the encounter, which allows their grandfather to identify the man inside the suit as a Silicon Valley billionaire from before their time.  To try and follow up on their new information, cousin Eva uses her new-found magical powers to open a portal to Dinosaur World, where Reptil confronts The Hag of the Pits, the wizard who created his amulet in the first place.

Then, things get complicated.

I actually missed the first issue of this book, and so I don’t know how Reptil came back from what was supposed to be his death during the Avengers Arena days, but this issue doesn’t worry itself with continuity moments, instead launching headlong into plot and incident.  There’s almost TOO much in these pages for my tastes, as the transition from figuring out that Megalith is the billionaire to Dinosaur World doesn’t make a lot of narrative sense to me, but nothing here feels wrong, just fast-paced.  The issue’s ending is a really impressive cliffhanger, too, as Reptil transforms fully into a dinosaur and loses himself in the mind of a T rex.  Artwise, Reptil #2 is okay, but it does feel as if Balam and Ozaba are intentionally referencing the style of Reptil’s creator Humberto Ramos rather than doing something of their own.  Their work is a bit less stylized than his, but there are still moments that feel unnaturally Humberto-fied, which is not to my particular tastes.

All in all, though, Reptil #2 gets the job done well, delivering a LOT of action, investigation and dinosaur battles in a short number of pages, with art that works more often than not and a final grade of 3 out of 5 stars overall.  it’s an above-average issue that finally upgrades his costume from the oh-so-2009 cargo pants to a more striking black and green patterned looks, so I’m mostly happy with it, and I’ll be looking our for #3.

There's an awful lot of storyline heavy-lifting, but the art is solid and the cliffhanger does its job. This feels more all-ages than most Marvel productions, as well.