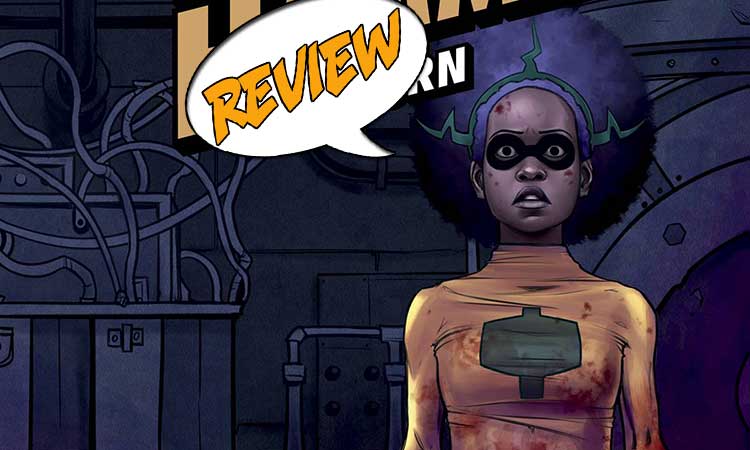 In Black Hammer Reborn #1 from Dark Horse Comics, Lucy Weber, the Black Hammer’s daughter, has given up her father’s mantle for the life of a mom and wife.  But can the world’s former greatest super hero truly give it all up?  Find out in your next mighty Major Spoilers review!

PREVIOUSLY in Black Hammer Reborn: Lucy Weber lost her father, the famous Black Hammer, in 1986.  Then, ten years later, she found where he and his team had vanished to – a timeless farm in a pocket universe.  Discovering her father had died, she took up his mantle and became, for a time, the new Black Hammer.  However, a tragic incident forced Lucy to lay down the Hammer, and now, as mother to a son and teenage daughter, Lucy lives a safe life of domesticity – though, is she truly happy being a suburban mom?

AM I DOING THIS RIGHT?

How do you feel when you give up something you loved, that defined you, for…this?  This is the dilemma facing Lucy Weber, heir to the mantle of her father, the Black Hammer.  After finding out what happened to him and his team mates, and freeing them from entrapment in a pocket dimension, Lucy took up the Hammer, and was, for a time, the guardian of Spiral City.  Then…something terrible happened, and she gave it all up.  Now, twenty years later, a mom and a wife, is Lucy really any happier?

That terrible something casts a shadow over events in this cracking opening issue of Black Hammer Reborn #1.  Jeff Lemire is a great writer, and he has created a perfectly paced, excellently written opening chapter in this new series.  Lucy, her struggles with her son and rebellious teenage daughter, is a character I think a lot of us with families can relate strongly to.  All your youthful dreams and aspirations are subordinated to the dreams and aspirations of other people who may or may not show you the respect you definitely deserve.  Lemire captures Lucy’s quiet desperation as chaos once again erupts in Spiral City, and she decides to not get involved.

And while you might think scenes of Lucy struggling to get her son out of the house and to school might be boring, or her dealing with her ‘couldn’t care less’ daughter Rose, might be dull and boring, you would be wrong.  Lucy’s choice – to give up the Hammer – is the core of this opening issue.  If you choose to carry on our dead father’s legacy as guardian of Spiral City, what event, what happening, would force you to give it up.  And then, faced with utter chaos, why would you continue to deny your responsibility.  There is a hint, well, more than a hint, in the artwork during Black Hammer Reborn #1, that explains the reason, but finding it out in later issues will ensure this emotional thread is tugged on more than once.

Aside from Lemire’s writing and plotting, which sees the introduction of a new Black Hammer (the hint is in the title, everyone) in an entertaining sequence that hints heavily who she is, the artwork is utterly fantastic.  Caitlin Yarsky’s assured work is a real strength in Black Hammer Reborn #1.  Bold linework and effective and evocative imagery – the defeat of the villainous Black Hole is a case in point (as is the appearance of a really appalling creature at the end) – makes Black Hammer Reborn #1 a visual feast.

Black Hammer Reborn #1 is everything a good, modern comic should be.  There’s action, of course, effectively realised by wonderful artwork.  There’s mystery – why did Lucy give up the Hammer, and who is the new Black Hammer?  And there’s family drama – Lucy’s husband Elliot seems like a loveable shlub, but what is he, really?

Black Hammer Reborn #1 takes you to a new chapter of the Black Hammer series, putting us in the shoes of a hero who have up her mantle for a more normal life. But what is ‘normal’ really, anymore? Lucy Weber is a reluctant hero for our times, and I look forward to seeing what happens next!