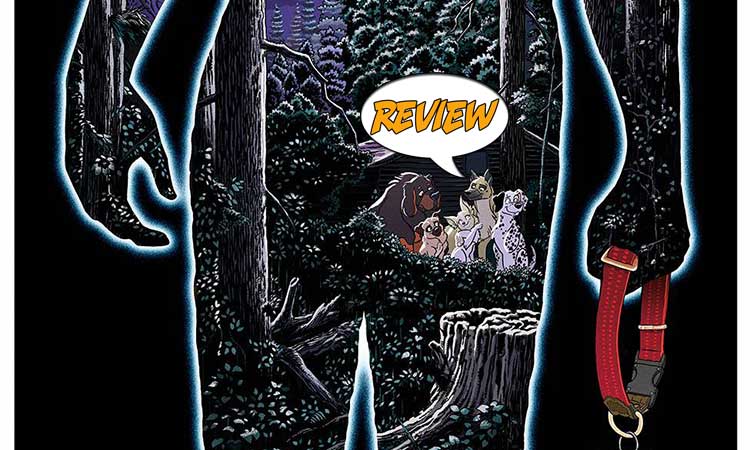 It started with Sophie, but now Earl remembers how the Master brought him home. But what can several frantic dogs do against an experienced killer? Find out in the thrilling conclusion of Stray Dogs #5 from Image Comics! Previously in Stray Dogs: The dogs are getting frantic. Sophie is convinced that the Master has killed Victor. Earl still insists he is not a killer at all, and he thinks Sophie is lying. Rusty stands by Sophie. Later, he tells her he doesn’t remember his Lady, but he believes Sophie and wants to support her. They join the rest of the dogs sniffing around the Shed where they smell a trace of Victor. Sophie nudges the shed door open – and finds Victor dead. As the dogs panic and try to find a way out, Earl curls up next to the Forbidden Room. The door is slightly ajar, and he goes in and sniffs around. He finds something that jogs his memory. His Lady was killed when he was a tiny puppy, and when he arrived, there were eight other dogs already living with the Master.

IT ALL BUILDS UP TO THIS

It was with great trepidation that I read Stray Dogs #5. We’re at that point in the horror story where we know the dogs are trapped in a house with a killer. And I’ll put in a trigger warning for dogs being hurt. The Master finds Earl in the Forbidden Room. Earl growls at him. He gets his shotgun and threatens to punish him. In the background, we see the mounted heads of former dogs. Earl lunges at him and the gun goes off.

All the other dogs, except for Imogene, are hiding in the pantry. Earl runs through the house and another shotgun blast goes off behind him. He tells Imogene to run, but she just lifts an eyebrow and looks at him. He runs downstairs where the other dogs are and yells at them to run. The master reloads his gun and Imogene attacks him from behind knocking him down the stairs.

The dogs can’t get out – all the doors are locked. Earl leaps through a window, getting badly cut in the process. But the rest of the dogs can finally make it outside. Then Sophie insists on going back for her Lady’s scarf. The Master kicks open the door and shoots, hitting Roxanne. She, too, insists that the rest of them run. But where can they go? The road in front of the house is a highway full of cars. As the Master aims his gun at Roxanne, Sophie bites his leg. He drops some shells and kicks her off.

Earl steps onto the highway. As cars swerve to try to avoid him, they start crashing into one another. He gets hit and thrown to the side of the road. The other dogs gather around him and ask him why, and he looks at them and tells them he remembered.

A woman from one of the cars steps out. She can’t find her phone and approaches the Master, asking if she can use his phone to call 911. The remaining dogs all start barking at her in warning. He has been holding one hand against the side of his neck where Earl bit him. He has lost a lot of blood, and he collapses.

The police arrive and are still there as day turns to night. The dogs bark frantically, and one of the cops wonders if they can get someone from Animal Control to help with them. Then a Police K-9 arrives and asks if he can help. The dogs tell him about the room upstairs, the shed, and the bodies under the porch.

Thankfully, the stress of this well-crafted horror story is relieved by an epilogue. In the dog park, Sophie, now known as Trudy, plays fearlessly with other dogs, particularly a large dog we recognize as Rusty. He sort of feels like he knows her, but they just don’t remember. They continue playing as their people talk about them, and how they were both recent rescues. Oh, thank goodness that some of the dogs have a happy ending!

The tension starts out high in Stray Dogs #5 and the issue is full of action. All along, Earl has been the chief skeptic, the one dog who stood behind the Master. But last issue, what he remembered hit him hard. He knows what the truth is, and when we see him, he is angry, and he is past being controlled by the fear of being called a bad dog. The lifeless eyes of his former friends look down on him, and it seems as though he is avenging them as well. His jump takes all the energy of his anger and he almost flies. Like the rest of the dogs, though, we hear the first gunshot without seeing what happens, and for a dreadful moment, we wonder if Earl is dead.

I like the closure of having a K-9 arrive on the scene. While we are privy to the dogs’ conversations, they cannot talk to humans. In the aftermath, they stay huddled together, in shock. We know that once the K-9 knows about the bodies, he will lead his human handler there, so we know that the murders will not go unsolved. And it is reassuring to see this dog take charge of this job.

Stray Dogs #5 is a nail-biter right to the end, especially if you are a dog lover. The dogs are sympathetic and heroic without ever losing their dogginess. The ending is well-crafted and doesn’t cheat the story. Even better, there is a hint of a new Stray Dogs book to come in the future.

Most of the dogs believe Sophie – but can they escape from the serial killer?