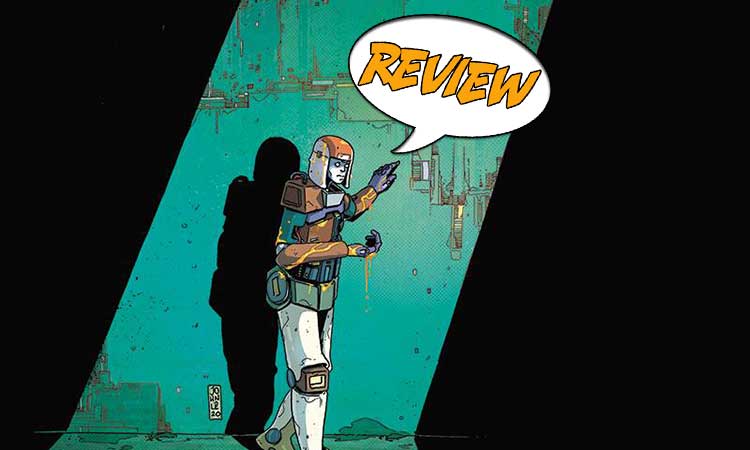 After an attack by a lone Duster, the Order raises the stakes against them. Into this powder keg, Aiko returns with surprising and unexpected ideas. Find out what in Giga #4 from Vault Comics!

Previously in Giga: Tensions rise between the Dusters, who live outside, and the religious Order to whom the Giga are gods, if currently dormant ones. A young Duster confronts some of them at the neck of a Giga and blows himself up after telling them they live in a junkyard and call it Heaven. Evan meets with his friend Mason, the cop, and tells him that Dusters didn’t kill the Giga outside of down, and that his man Saber lied. They go to the Giga and Evan shows him the wound was torn open from outside, not exploded from within. Mason looks for Saber, but finds him dead. The leader of the Order (Father Crowquill) announces extra safety measures, including a ban on Duster trade goods. Laurel makes it back to Evan’s apartment, and when he returns home, he finds not only her, but Aiko.

Giga #4 opens with a memory. Aiko manipulated Evan into building a neural interface, not just so he could use his legs, but so she could see the Giga’s thoughts. She wants to understand their truth and is not content with the Book of Assembly as it is interpreted. Evan was not happy with her, but he did give her a way out to escape from the Order.

In the present of the story, armed men chase a Duster through town and back alleys. He hits a dead end, and they shoot him in the upper chest. He is a spice trader. Literally. He is dealing in oregano and cinnamon. They kill him. One can read a lot of metaphor into the conflict between the Order and the Dusters.

In Evan’s apartment, Aiko has fixed Laurel. Evan has found her visor and makes it clear that he resents the deaths that seem to follow in her wake. He is also suspicious that she just happened to have with her the parts Laurel needed. Aiko deflects this and talks more about her escape. His directions led her to the heel of the Giga. From there she got outside and found a way into the old sewer system, which she, interestingly, describes as a miracle. (Remember that one of the central points of the story is the religion around the Gigas, and now we are starting to see how different people respond to it.) Her burns became infected, and she was found by a Duster, Kevin, who used medicine and maggots to heal her.

But while she was ill, she also tried to write down her thoughts and her experiences from when she interfaced with the Giga. She and Kevin read through them, but they didn’t make sense. He felt they needed more, and they decided to interface with the nomad Giga in the forest. They attracted a small group of people, and they took turns in the hopes of minimizing neurological damage. They learned more and more about the history of the world, but their presence also drove the Giga to destroy themselves as they sought to get rid of the humans.

Now Aiko has a new book with her, a Book of Disassembly.

At the Duster camp, a man brings in several dead bodies that were left outside of town, bodies of Dusters. General Tommaso brings them to the Council even as they are discussing ways of calming down the rising conflict. Tommaso sees the bodies as an affront, as an escalation, as a reason to go forward with his plan. Indeed, at the same time, Father Crowquill and Inquisitor Lambert talk with Mason. They believe the Dusters killed the nomad Giga, and after Saber confirmed it, he was killed, and he infers that it was Mason who did it, and that Mason was trying to instigate the conflict.

Giga #4 is full of twists and turns. The plot is intricate, so paying attention to the art helps keep us oriented as to where and when we are. More and more, we see the grittiness of this world. In fact, it may only be Father Crowquill and some other few who live in a semblance of luxury. The streets among the Giga are full of rubble and broken parts. Graffiti covers the walls. Homeless people sleep in the streets. And compared to Aiko’s memory, things have gotten tougher in the past thirteen years.

We also see more details of the Duster camp. When we first met them, they looked like a militia organization. Considering General Tommaso, they certainly have a militant arm. But a member of their Council remarks that they are farmers, not terrorists. They are mainly farmers and traders. Inside the tent where the Council meets, there is a table inscribed with pictograms that show this, that may show their history. In stark contrast to that history, this is where Tommaso dramatically drops the body he shows them, and this is the center of the page. Tommaso’s monologue travels around the page as he walks around the table. It makes an impact.

Giga #4 is an intense chapter in a story full of plots, treachery, and even some hope and optimism. The series is a fantastic read with hard-hitting ideas that make you stop and think and characters that continue to surprise.

Aiko has returned – but why?