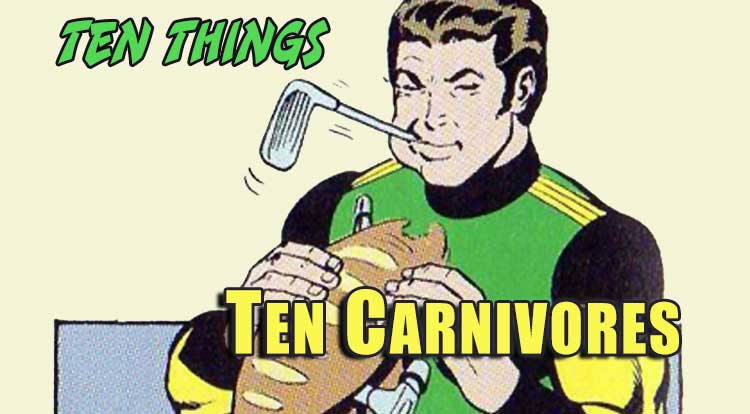 A wise robot named Cook once said, “You are what you eat!”  Today’s list of supers counts on you know that, the better to strike fear in your superstitious and cowardly heart. Welcome to Ten Things: Ten Super Carnivores!

Whooshman-Bicarbonate Films, in conjunction with An Amateur Comics Historian and animal-themed superbeings, Presents: A citizen of the Democratic Republic of the Congo, Henri Ilunga’s superhero persona combines technology (in the form of a sophisticated exoskeletal armor) and mysticism (in the form of a lion’s skin that imbues him with the enhanced senses, strength and durability.)  A scientist of some renown, Henri built his own prosthetics to ameliorate childhood injuries that forced him to wear braces.  Now a member of T.A.S.K. (the Tactical Allied Superhero Kommand), Mane has since avenged the deaths of his family and is recognized as one of the premier heroes of Africa and the world at large.

A full-sized male lion like the one he’s wearing will eat 16 pounds of meat (or more) per day. After his spinal cord was damaged while rescuing a drowning swimmer, former Olympic athlete Todd Arliss agreed to be experimented on by the nefarious and unethical Dr. Dorcas. Transformed into a super-strong gilled human/marine hybrid with a face full of razor-teeth, Todd dubbed himself Tiger Shark and began a long career of being on the wrong side of history. After years of clashing with Namor The Sub-Mariner, Tiger Shark has been conscripted forcibly into his newest venture, an aquatic team called The Defenders of the Deep.

A tiger shark in captivity will eat 10% of its own body weight every week, while wild sharks sometimes target dolphins or even smaller sharks for their lunch.

8) THE LEOPARD FROM LIME STREET Sometimes known as Leopardboy, Leopardman or just plain The Leopard, schoolboy Billy Farmer was slashed by a radioactive leopard in the streets of the village of Selbridge, England, as one does.  Gaining superhuman strength and catlike reflexes, The Leopard began punching crime, all the while selling photographs to the local newspaper to keep his sick aunt’s finances afloat.  If that sounds familiar, don’t despair: He also has a utility belt full of gadgets that he uses to leap across rooftops, so it’s not like he’s swiping ONLY from Spider-Man.

Leopards have shorter legs than jaguars and other wild cats, but are still excellent hunters, taking down impalas, foxes and jackals, and even the occasional giraffe. A member of North Force, the official super-team of Canadia in the world of Savage Dragon, Connie Chen’s power suit allows her to fly and provides a measure of durability against attack.  A science prodigy, Blue Jay built her own armor to fight for justice, falling in with her team after they accidentally teamed up multiple times.  Coincidentally, every member of North Force bears the alias of a Canadian sports team, which is both funny and a little distracting.

Her namesake bird eat mainly seeds and nuts, but will also snap up spiders, flying insects and even small vertebrates when it can. This one’s gonna get complicated, so sit back and enjoy a beverage while we unravel it.  In one of several realities known as Earth-3, this “hero” (real name unknown) is a member of the Crime Society, alongside doppelgangers of the Justice Society and Justice League.  His world is an anti-matter duplicate of pre-Crisis Earth-2, meaning that in their evil mirror universe, there are still alternate realities, implying that those worlds also have duplicates, which then have alternates, and it’s turtles all the way down.

Or in this case, owls. Either/or.

Though freaky-looking, his namesake bird of prey is a silent and lethal predator, so rodents beware! A barefoot warrior, mean-mean stride, named for the extinct Tasmanian tiger (which was, in fact, a marsupial rather than an actual tiger), Corinna’s last name is unrevealed.  She was first seen as a member of an international team of freedom fighters called The Revolutionaries, whose activities make them controversial.  Thylacine and her whole team were then conscripted into the Suicide Squad and forced to work for Task Force X.

The twist is, they INTENDED to get captured, as the Suicide Squad is one of the injustices they mean to destroy, by any means necessary.

Resembling both a canid and tiger, the thylacine was believed to hunt wombats, possum and kangaroos before being wiped out. Hand-picked by beloved British hero Britannia to serve as Northern Ireland’s representative in a super-team called The Union, Snakes is a mystery.  Beneath his cloak, he is nothing but a collection of snakes, and it’s unclear whether he is or was ever human at all.  His strange hive nature made him immune to the symbiotic possession of alien symbiote-god Knull, giving his team a slight edge during the endless battles of the King In Black crossover.

The Union has broken up, sadly, but we might get lucky and see him somewhere, especially if he turns out to be a mutant.

Pretty much all snakes are endothermic, amniotic carnivores, with some species swallowing their prey whole. While searching for the missing Marvel Family, the Mystery Inc. gang ends up captured by Mister Mind, who vows to turn them into monsters.  When he exclaims his usual cry of dismay, Norville Rogers was transformed by the magics of Shazam, gaining enough power to fight off the combined powers of villains Ibac and Sabbac.  (He had quite a bit of help from pal Velma, whose Yelp of “Jinkies!” gave her superhuman abilities of her own.)  The Scooby gang successfully frees the Marvels, allowing Shaggy to get back to the business of inhaling triple decker ham-liverwurst-marshmallow-hamburger-chocolate-peanut butter-banana sandwiches as he, unlike his film adaptation, is not a vegetarian. An Earth-11, where everyone exists but their biological sexes are different, Blue Beetle (who may still be named Jaime Reyes, though that has never been confirmed) is a member of the Justice League.  Young, brash and opinionated, she appeared once during a tour of the Multiverse by Donna Troy, Kyle Rayner and Jason Todd.

Her costume is nearly identical to the prime Blue Beetle, which likely means she is also powered by a mystical scarab, as he is.  Any Brendan Fraser fan can tell you that scarabs are dermastids who eat the flesh off animal carcasses (though, in real life, they don’t go after living flesh.) After years of studying the chromosomal makeup of panthera tigris, Dr. Lancaster Hill found himself targeted by an angry local healer, who resented Hill bringing Western medicine to his village.  Forced to inject himself with an experimental serum, Lancaster gained the speed, strength and ferocity of a tiger, even fighting off a REAL tiger.  That beast’s hide formed the basis of his crime-punching costume, which he used upon his return to the United States.

Rising up, back on the streets, his namesake animal will consume primates, birds, reptiles, amphibians, fish, and even invertebrates and have even been known to kill and eat baby elephants.

Once again, this week’s topic, Ten Super Carnivores is all me, but feel free to follow along @MightyKingCobra to suggest your own! There’s always more Ten Things madness on my Twitter or check out the full Twitter archive here!  As with any set of like items, these aren’t meant to be hard and fast or absolutely complete, since we haven’t gotten to the vegans yet.  Either way, the comments section is below for just such an emergency, but, as always: Please, no wagering!