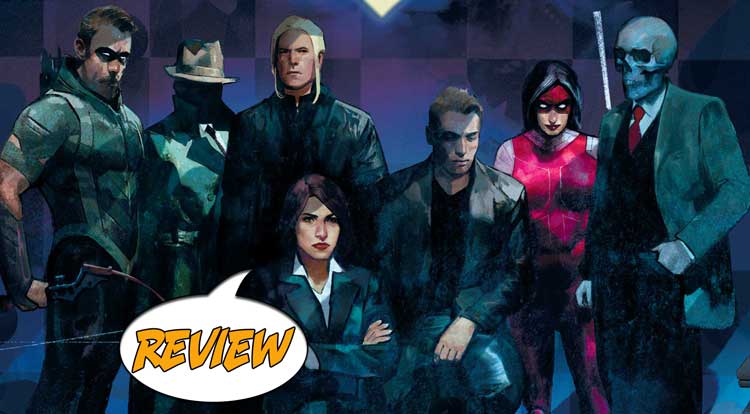 Who can you trust when even the Justice League cannot be trusted?  Call in the forces of Checkmate!  Your Major Spoilers review of Checkmate #1 from DC Comics awaits! Previously in Checkmate:  The dark forces of Leviathan have torn through the DC Universe, and now no one can be trusted. No one…not even the Justice League itself can be trusted.  The mysterious Mr. King has helped Green Arrow assemble the greatest team of super—spies the world has ever seen, and now they will have to outsmart the smartest people in the world before they destroy everything.

THE TRUTH IS OUT THERE

We start out Checkmate #1 with a flashback two years, with a confrontation between Talia al Ghul and Mark Shaw, the former Manhunter, wherein he apparently steals the throne of her father from their hidden fortress.  Cut forward to a time identified as weeks ago, to find Robin breaking into a Leviathan black site, only to be caught by Talia herself.  They stow away as Leviathan agents steal some technology, leading to a meeting of Checkmate in the present day.  The group (Manhunter Kate Spencer, Green Arrow, The Question, Mr. Bones, Steve Trevor and Lois Lane) wonder what happened to Talia, then turn their attention to pumping the mysterious Mr. King for information.  Lois suspects that he’s not human, but he denies it (with a very Bendis “I’m, like, totally a human person”), and suddenly we’re on to the next thing.  Leviathan interrogates Talia and Robin, and the story ends with Lois in the crosshairs of a sniper.

It’s been more than a year since the Leviathan Dawn special that set up this series, and even though I read that book, I still felt very much lost as Checkmate #1 starts.  The destruction of all the other spy agencies to be replaced by Leviathan has led to a chaotic state of affairs, and the Lois portions of the story feel remarkably like they’re still tying into Superman stories from that time as well.  There’s very little new information given in these pages, as well, making for a confusing series of unrelated events.  I like Maleev’s art in this issue, especially his take on Talia, first seen lounging in a throne in her catsuit with a glass of champagne, but his work throughout the book is quite solid.  The cinematic faux-pan of the last page is very well-done as well, but muddy coloring throughout the book mars some of the art by making it too dark in places, which adds some visual problems to the pacing issues.

For me, Checkmate #1 felt like nothing happened other than some conversations in various locations that may or may not be connected, with art that helps to build suspense even through problematic coloring, finishing things with a better-than-average 3 out of 5 stars overall.  There’s potential here, but given that we’re presented with eight main characters, six of which do nearly nothing in the issue, has me worried.

This doesn't really feel like a first issue at all, more like #3 of 12, and that's difficult for understanding what's going on. Maleev's art is cleaner than some of his previous work, but muddy coloring covers some of it up.