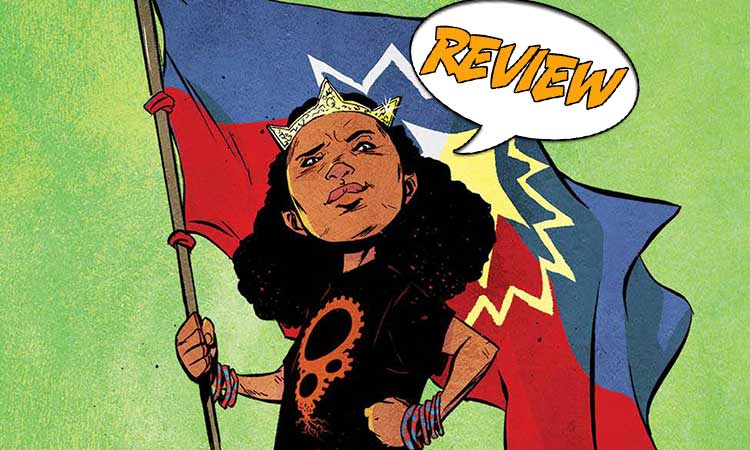 The battle against the Jinoo and other creatures is not going well. Can anyone else uncover the secret Enoch found? Find out in Bitter Root #14 from Image Comics!

Previously in Bitter Root: 1925 is a year of changes. Ma Etta has declared Blink to be the new head of the family, and Blink calls upon all the families around Harlem to work together. Enoch was killed, and his Chinese friend dragged away by dog-like creatures. In Tennessee, Ford, Cullen, and Sarah keep traveling and finding more of the trees that kill people. They arrive in one town just as a tree attacks an orphanage, and together the trio kills the trees and rescues the children. Time runs more fluidly in Barzakh, where Dr. Sylvester learns that the demons there were once normal inhabitants who were corrupted when their world was conquered.

FACE TO FACE WITH THEIR OWN LIMITATIONS

Bitter Root #14 is introspective as we’re reached the point where there are more and different monsters and people are just learning how to combat them. The action starts in the past, in 1919, when Enoch loses much of his family to Jinoo and starts to wonder whether there is more than the Jinoo out there. He becomes estranged from the rest of the family and starts his research and experimentation. He wonders whether there are more worlds out there and whether the evil that infects Jinoo doesn’t originate in his world at all. His work leads to his bringing the rabbit-like creatures to Earth.

As a leader, Blink becomes even more critical of herself. She mentally compares herself to family and friends who have been in the fight before her, and feels she comes up short. Yet where she leads, the others follow.

In Barzakh, Dr. Sylvester considers the similarities and differences between science and faith and recognizes he is a scholar in both ways of knowledge. He has learned more of Barzakh. The beings who lived their let their emotions rule their intellect, and hatred was their undoing. Now that evil bleeds over to Earth and he continues to seek the knowledge to defeat it.

Ma Etta reflects on her history, on a lifetime of other people telling her what she could and could not do. But now she is certain that she can determine what she is going to do, and she drinks a substance from a flask that takes her to another world, a world populated by gods perhaps?

Ford, Cullen, and Sarah continue to travel north with a caravan of refugees. They have reached Virginia but continue to find towns overrun by the trees. And with the trees, there are now dogs as well. When they find them, the rag-tag group works together to fight against them for their very lives.

When Blink goes to Enoch’s grave and talk about her doubts, Dr. Sylvester arrives. Finally he has more understanding about what they are fighting. But before they can talk, they are attacked by Jinoo!

The art of Bitter Root #14 enhances the story with a mix of montages, dramatic splashes, and terrific action sequences. The art is the backdrop that leaves us room to fill in more about our understanding of the characters. Enoch’s story starts out with the last bit of the fight in which he loses his brothers and sisters, then cuts to a montage of his solitary work. His house has a wonderfully arcane steampunk feel to it, full of interesting machines and mechanical work as well as heaps of books, papers, and things like skulls.

It makes an interesting comparison and contrast to Dr. Sylvester’s work on Barzakh. He has been in Adro’s castle and library, so he too is surrounded by books and papers. But his path soon takes him out in the world and deep into a cave where he finds a statue, presumably of a god. It is enormous and robed, so while it looks basically humanoid, it also bears a passing resemblance to the monstrous trees that we have been seeing. And in a fascinating connection, a number of the small creatures that Enoch found are gathered around the base of the statue.

BOTTOM LINE: A TIME OF GROWTH AND CHANGE

The development of the story in Bitter Root #14 is deep and fascinating. The idea that one place, Barzakh, inspired the concept of a place like purgatory across multiple belief systems forges connections that touch the characters, even if they do not all realize it yet.

As more monsters roam the Earth, the Sangeryes’ work slowly starts to bring people together.