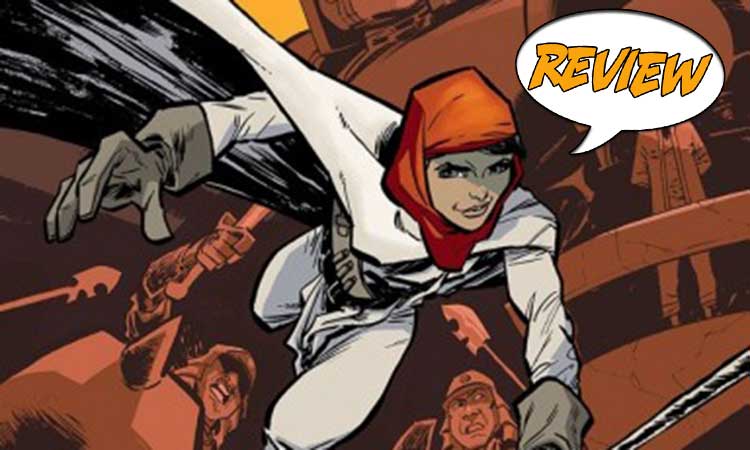 In the 13th century, Shahidah El-Amin travels from Baghdad to Wales in search of an artifact. But when an old friend and rival gets there first, what perils await her? Find out in Compass #1 from Image Comics! Previously in Compass: In the thirteenth century (by Western reckoning, that is), a traveling scholar from the House of Wisdom in Baghdad has traveled to Wales, searching for something. At this time, Baghdad is the heart of the civilized world. Further to the East, the Mongols reign throughout much of Asia, and the Golden Horde has advanced into eastern Europe. Against the backdrop of one of history’s most fascinating times comes a tale of adventure

Compass #1 opens on a moonlit light in the kingdom of Powys Fadog. The year is 640 Anno Hegirae, also translated for us as 1242 in the barbarian calendar, telling us that the story is set in the Islamic era. In the ruins of a Welsh castle, a hooded figure pries a wooden door open with a crowbar. Behind the ruins of a tapestry, she finds a secret doorway. Before exploring much further, she triggers a trap. This is our introduction to Shahidah El-Amin, a scholar and adventurer.

She manages to work her way out and continues on to a small chest sitting on a pedestal. In the finest tradition of pulp adventure, she was not the first to reach it. A Chinese woman, Ling, stands on the balcony above Shahidah, holding an ornate ring several inches in diameter. The two women apparently know each other. Shahidah offers to buy it, but Ling indicates that there have been some changes. “The Kingdom Under Heaven has fallen,” she explains, referencing the conquest by the Mongols. Indeed, as she fades into the shadows, a group of soldiers come through the door.

Shahi fights for her life, and when she knocks a torch down, a fire starts. She manages to jump out of a window, landing in the river. The soldiers return to their camp, telling stories of an Arab witch and blaming Ling for leading them into a trap. Their leader, whom we do not see, is Margul Shadgur, a Khan of the Golden Horde. He singles out one of the soldiers for death at the hands of a large, masked man.

Unconscious, Shahi drifts down the river until she is found by an old couple of Welsh farmers. They are not sure what to make of her when she asks for help. When she tells them she is from Baghdad, it is as though she told them she was from a mythical place. All they know is that she is from a place of devils and heathens. Shahi has more at her disposal – a letter from a local priest. She just wants to get to a certain town and, when it comes down to it, the peasants are happy to take her there and let the local Lord deal with her.

Lord Ednyfed can speak Arabic. Shahi knows who he is by his coat of arms. He has heard of the House of Wisdom, although he is not approving that they allow women to study there. She shows him her letter, and he is appalled that the Abbot not only let her study at his cloistered monastery but has given her safe custody without her knowledge. For this he insists that they go see the priest in person.

The art of Compass #1 is clearly evocative of the setting and the time with just enough technological wonders to help make it exciting. The action is well-paced with a cinematic feel, and this starts as soon as Shahi triggers the trap in the castle. She is quiet as she works, so when her foot triggers a plate on the floor, and the wooden ceiling above her cracks, the sound effect stands out. She grabs a loose panel of wood and finds a spiral staircase heading down. She uses her panel as a makeshift sled to slide roughly down – and lands in a room full of skeletons. The dynamism picks up again when she fights the Mongols, and the fight choreography is clear.

I enjoyed seeing Shahi in action from a distance before we had the reveal that she was a young woman in a hijab, not a young man in a hood. I’m sure her kit is somewhat anachronistic, but it is fun for the story. Her facial expressions are wonderful, and the artist is not shy about using a wide variety of camera angles and shots to help keep things moving. I also quite liked her relationship with Ling – a professional rivalry between two independent and capable young women.

Compass #1 takes the pulp adventure concept and sets it in a fascinating time period. We forget sometimes that the center of knowledge has moved among different civilizations, and it is interesting to see how people from these broadly different cultures interact. But at its heart, it is fast paced and a lot of fun.

Shahidah El-Amin is searching for an artifact but has discovered much more than she bargained for.