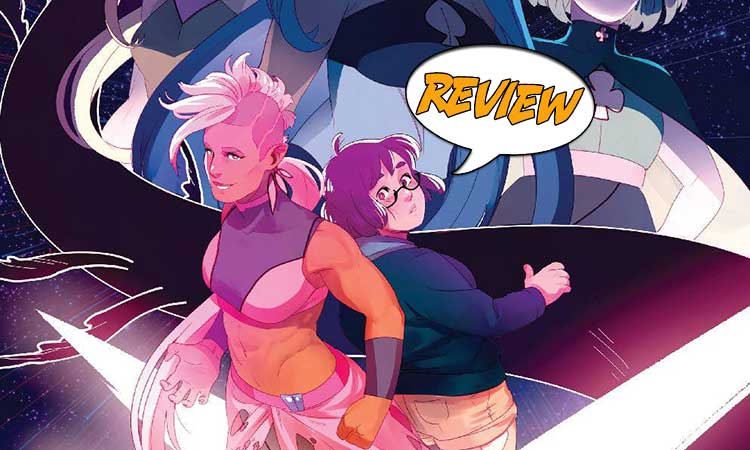 Gigi is a shut-in, who’s about to get a real education about who the heroes of her world really are.  Your Major Spoilers review of Save Yourself #1 from BOOM! Studios, awaits! Previously in Save Yourself: Aoe, Thel, and Gen, better known as the Lovely Trio, first burst onto the scene five years ago when they saved Earth from a surprise space monster attack. Since then, everyone, including Gigi, whose brother died as a bystander in a Lovely Trio battle, idolizes them as superheroic pop icons.

Save Yourself #1 opens with a young woman named Gigi sitting through the intro to her video game, which also gives a handy refresher for the backstory of this comic.  She’s interrupted by a phone call from her friend, Shawn.  He wants her to come into the coffee shop he’s at and help cover a cash register.  Gigi reluctantly agrees to do it.  On her way there she bumps into a person who she immediately has a crush on.  She makes it to work to find that it’s busier than she was told. She talks with her boss, Bear, for a while before they get an alert on their phones telling them that The Lovely Trio, the planet’s heroes, are fighting monsters nearby, which they leave to see.  During the fight Gigi sees one of the members of The Lovely Trio kill an innocent bystander on purpose.  She then escapes with the help of a pink dragon, who is also her crush.

Visually, Save Yourself #1 is a bombardment of cotton candy colors, mixed with round, soft lines, with a touch of pixel art thrown in, for an end product that is surprisingly enjoyable for such a saccharine art style.  Also, credit to the artist for having a variety of body shapes here and not just the standard, slim/athletic build that’s normally in comics. This is where the complexity of the issue ends.  This issue is a pretty standard opening issue to a pretty standard “The heroes aren’t really the heroes’ ‘ type story, the only things setting this apart are the minor anime and kaiju seasonings and the Gen Z/younger Millennial sensibilities.  But, that’s not necessarily a bad thing, it just means that if you’re looking for a low stakes, enjoyable, story that isn’t hiding much beneath its surface at the moment, this will do the trick.  The hero as a celebrity angle isn’t exactly original either, but it’s not done poorly here either.  Seeing little hints to how The Lovely Trio has infiltrated the world via advertisements in the background is a good way to introduce this concept without beating people over the head with it  and shows promise of being a more interesting aspect to this series.

The Bottom Line:  Not A Bad Young Readers Book

All in all, there’s nothing offensive about Save Yourself #1, there’s also nothing really challenging or deep about it either.  It has a little bit of action to it, there’s a little kissing and flirting here, the visuals are bright and approachable; It seems like a perfectly fine book for a teenager looking for something to read.  3.5 out of 5 stars.

Save Yourself #1 isn’t pushing any boundaries or taking a deep dive into any sort of topic. But, what it lacks in complexity it makes up for in competently telling a straightforward, decent story that’s fun to look at.