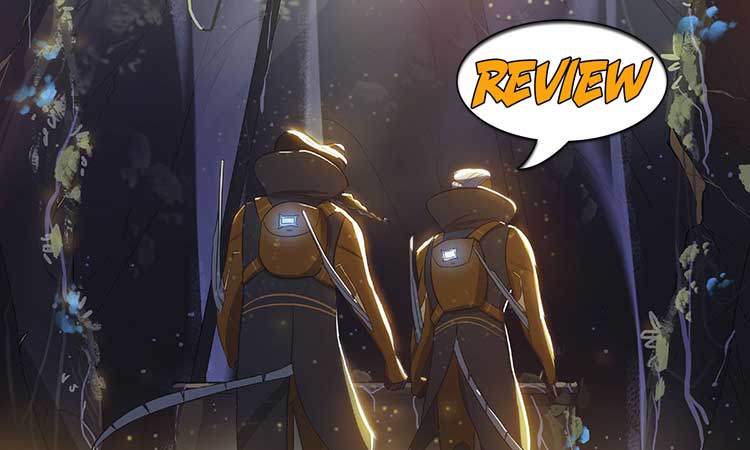 Rangers of the Divide #2 Review

While the new recruits are a grudging team, leading them is like herding cats. Can the Commander bring them together enough to work on this mission? Find out in Rangers of the Divide #2 from Dark Horse Comics!

RANGERS OF THE DIVIDE #2

Previously in Rangers of the Divide: Commander Knight arrives at an outpost on his dragon. He had been hoping to find reinforcements; instead, he finds a handful of Cadets, new recruits. The six of them, three young men and three young women, have hardly had any training and understand even less about teamwork. When a Wendigo attacks the Outpost, Elise is the only one who goes to see what is happening, and she fights it alone. This sets her up as their leader, but the Commander is less than impressed. He sets up a test fight against another Wendigo and orders them to fight as a team. They manage to do so, and Knight decides to take them along, even though he knows they may not survive.

Rangers of the Divide #2 opens a week after the Cadets first set out. They break camp and prepare to get going, but two of them are still fast asleep. They don’t wake up, and the Commander’s solution is to tie them on the backs of their dragons. We can tell by his thoughts that the Commander is in a hurry. He has a major flaw, which is not to tell the recruits much, if anything, about what they’re headed into. We get some idea that they must get to an area of high metal density and soon.

They reach some ruins close to an area where the magnetic levels rise. But Brandt dismounts, fascinated by them, and digs out a book. He believes these may be a relic of the Tall Men, a telepathic race from the past. The Commander scoffs at this being a myth, a story for children. Brandt runs off to find a souvenir, and the Commander sends his sister, Bryce, to bring him back. Brandt explores a little more and even makes a video about them, talking his sister into recording. Apparently, the Tall Men vanished without a trace. He opines they may have been abducted by aliens.

The rest of the party continues to wait for them. The sun gets lower in the sky. Elsie suggests they camp here – Ivan wants to wash up; Camille doesn’t want to travel in the dark. But Knight insists they must leave – and now! A Squall Owl flies over and the Commander reassures them it won’t attack, even as he realizes that animals are now fleeing the area and the weather may become unstable. He insists they must leave; they are the only Rangers left, and they have a mission.

Bryce and Brandt return just in time. The Commander has insisted that they need to leave before sunset, but it is too late. The sun is setting. They take off at a fast run – their dragons glide, but do not fly, and a magnetic storm comes to life around them. They need to find an area heavy in metal – and quickly!

A TREAT FOR THE EYES

One of the strengths of Rangers of the Divide #2 continues to be the imaginative settings. The issue opens up in a place called the Red Forest, home to enormous, gnarled trees and fabulous clifftop vistas. But even with grand locations, sometimes it is the little details that make or break it. I really like that while the trees are huge, their foliage lets some light through. That dappled sunlight highlights the faces of the characters and is used to give depth to the background. It is not an effect I have seen done a lot, and it is quite effective here. The scale of it also transitions neatly into the ruins.

The young recruits certainly portray teenagers with their open expressions and wide range of feelings. I enjoyed the little touches like Brandt’s melodrama when he makes his recording about the Tall Men and his sister’s exasperation with having to deal with him. The thing I found most jarring is that the Commander, who has been withholding information from the recruits, shows us everything in his face. As a consequence, he also has an emotional range that borders on the melodramatic, which is not normally what we expect to see from a seasoned veteran. It is an interesting choice.

BOTTOM LINE: ARE THEY ON A MISSION OF NO RETURN?

Rangers of the Divide #2 succeeds at drawing us into a world that has a tantalizing amount of potential for story. This issue is more about the world and its challenges at this point than about character development, but it is still a captivating concept.

Rangers of the Divide #2

One seasoned Commander, six new recruits, and one dire mission!