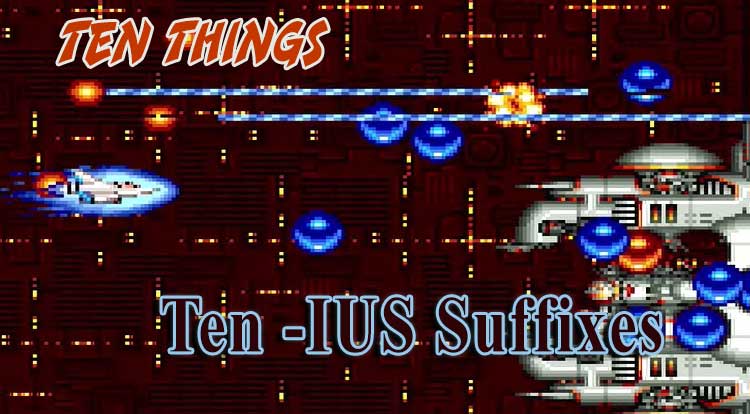 Some categories are harder to describe than others, but know this: It’s not Indiana University Southeast. Welcome to Ten Things: Ten -IUS Suffixes!

Whooshman-Bicarbonate Films, in conjunction with An Amateur Comics Historian and all the heroes of the sixties whose name ended in ‘-O’, Presents: After the death of The Chief and his Doom Patrol (they got better), Robotman was shocked to meet Arani Caulder, Chief’s secret wife. After their chance meeting, he had made her both immortal and able to control temperatures, projecting heat or creating waves of cold and ice. As Celsius, she rebuilt the Doom Patrol with new heroes, only to have The Chief deny ever having met, much less marrying her, upon his return. Celsius was killed during the invasion of Earth by a Gil’Dishpan attack craft, leaving many questions unanswered.

It should be noted that Chief is an inveterate manipulator who admitted to lying about their previous relationship, so it’s doubtful that the truth will ever be known. The protector of Space Sector 1123, Galius Zed is a decorated Green Lantern, serving with honor. Like so many of the alien members of the Corps, he was mostly used as an interesting background sight throughout most of his career. Galius’ death was pretty meaningless, dying at the hands of former Lantern Fatality, but at least his escaped the fate of his successor, Gundiff Cood, who was killed as a sight gag involving a Yellow Lantern sniper.

It was at once juvenile and disgusting. A young Canadian mutant, Jared Corbo and his half-brother joined Alpha Flight together, and his unbreakable force field served him well as a member of that team. Sadly, he couldn’t turn it off, leading him to have emotional problems and have to use a power dampener for simple things like eating and bathing. Jared’s father is unknown, but has been suspected to be Angelo Unuscione, AKA Unus the Untouchable, who has similar powers. Jared was one of the mutants depowered on M-Day, but he is likely living in peace and harmony in an unseen part of Krakoa these days, as all mutants are assumed to be.

A native of Multiversity-era Earth-8, a world based on the Marvel Universe, Hyperius (real name unknown) is a complicated character. He is a pastiche of Hyperion, a member of the Squadron Supreme or Squadron Sinister (there’s more than one Hyperion) who is himself a pastiche of Superman. This makes Hyperius a Superman twice removed, but still a member of the Supermen of the Multiverse, heroes assembled in times of greatest danger. As such, he’s usually just another cape in a crowd shot, as seen here. In 2013, Umar (last name unrevealed) became part of the latest incarnation of The Recurrence, where normal teenagers are empowered as gods every 90 years. Becoming Dionysius, the god of the vine, grape harvest, winemaking and wine, ritual madness, religious ecstasy, fertility and the theater, Umar became a pop star whose raves were legendary, using his powers to draw everyone into a hive-mind and sharing in (literal and pharmacological) ecstasy. Sadly, Dionysius’ fighting skills weren’t equally developed, and he was badly injured and left brain dead by one of his godly brethren. Born in an embattled neighborhood in Los Angeles, Destiny Ajaye grew up steeped in gang culture. At the age of 17, she used her incredible intellect and tactical skills to unite all the various gangs into one army, then began targeting the corrupt police. When last seen, she was in government custody, but it seems like we haven’t seen the last of the young Genius. Dispatched to Earth from Nebula M78, Mebius and his colleague, Ultraman HIkari ended an in-universe 25-year Ultraman drought. Battling the Alien Empera, Mebius chose not to bond with a human host like so many of his Ultra Brothers, instead taking on a human form and calling himself Mirai Hibino. In addition to headlining his own television adventures, he has reappeared four or five times in Ultraman movies and has guest-starred alongside Ultraman Ginga and Ultraman Geed. A golden-skinned hero (real name unknown), Sirius was once a young hero and a member of the super-group Teenpeace. As an adult, he is a member of The Peacemakers, the foremost super-team of his world. Able to manipulate energy and even make Green Lantern-style constructs, he is named for Sirius Comics, probably best known as the published of Joseph Michael Linsner’s Dawn.

(In a cool touch, ALL the heroes of his world are all named after comic book publishing houses.) A native of planet Acheron, A.I. – 11 was too headstrong and emotional for his creator’s tastes. His mind was wiped and he was left believing that he was a human, kidnapped by aliens and turned into a cyborg. A member of the first waves of recruits to Vril Dox’s L.E.G.I.O.N. (Licensed Extra-Governmental Interstellar Operatives Network), he and his fellow trainees were actually brainwashed by Dox to serve as his loyal protectors. After he fell in battle, the R.E.C.R.U.I.T.S. (Registered Experimental Class Regiment Under Initial Trainee Status) took his remains to Acheron, where his true origins were revealed, and a resurrected Darius chose to stay on his home world and lead his people. Born with a debilitating blood disease, Dr. Michael Morbius attempted to find a cure, eventually combining the blood of a vampire bat with electric shocks, because why not? On the one hand, he didn’t suffer from the disease any longer, but he did develop a craving for blood. Dubbing himself a Living Vampire (because of the Comics Code, which still forbade real bloodsuckers in 1971), Morbius clashed with Spider-Man, became a member of the Legion of Monsters and the Midnight Sons, and eventually got his bloodlust under control.

His ’90s cartoon incarnation had lamprey hands, which were at once terrifying and hilarious.

Once again, this week’s topic, Ten -IUS Suffixes, is all me, but feel free to follow along @MightyKingCobra to suggest your own! There’s always more Ten Things madness on my Twitter or check out the full Twitter archive here! As with any set of like items, these aren’t meant to be hard and fast or absolutely complete, if only because there’s still -ION, -IZE and -ITY to tackle. Either way, the comments section is below for just such an emergency, but, as always: Please, no wagering!