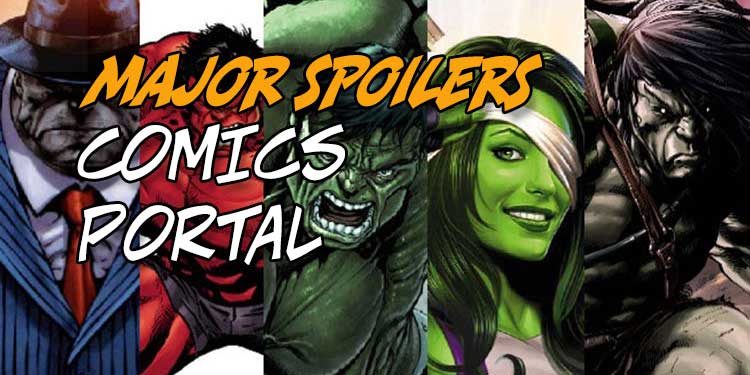 COMICS PORTAL: How Do You Solve a Problem Like the Hulk?

Immortal Hulk is ending with #50. After that, Donny Cates and Ryan Ottley will take their turn trying to solve the problem that is the Hulk. For 50 issues, Al Ewing and a team of artists have been going “where no Hulk has gone before” in Immortal Hulk for Marvel. If you’ve been reading this column, you likely remember that I’m not as big a fan of the series as those who call it “the best superhero comic today!”

I loved the first five issues or so when Bruce Banner was around during the day, followed by the Hulk surfacing at night to take on the evil folk who needed taking care of. After that, it’s been muddled, in my opinion, as they have attempted to make Hulk “larger than life.” The Avengers and other heroes keep getting taken down by the Big Green Guy, who can “assemble” himself even if he gets cut into little pieces.

Honestly, I’ll be glad when it wraps up soon.

So, what’s going on next? Let’s see what the aforementioned article says:

This unstoppable team of some of the industry’s greatest talent will helm a bold new era of HULK that begins when Bruce Banner discovers a radical way to control the monster within. Could this mark the final end of the green goliath? Or will the extreme solution create something new – with massive consequences?

What did Mr. Cates have to say about all this?

“Marvel just gave me the keys to the strongest one there is,” Cates said in a press release from Marvel Comics. “Haha… oh boy. You guys are just not ready for this. You’re about to find out what happens when Ryan Ottley and I get angry….and guess what? Well…pretty sure you’re gonna like us a lot when we’re angry.”

It’s interesting that Cates and Ewing are kind of swapping books about Hulk and Venom, although the latter will soon be releasing Gamma Flight, a team consisting of Absorbing Man, Dr. Charlene McGowan, Doc Sasquatch, Puck, Titania, and Rick Jones. We can expect that some of the storylines set up in Immortal Hulk will spill over into that new series.

I’m anxious to see how Cates will handle Hulk moving forward. I do have to say, though, that I’ve read about the Big Green Guy for years now. If he can again take us “where no Hulk has gone before,” that will be quite the accomplishment!

THE MANY SHADES OF HULK

I have been reading about Bruce Banner and his gamma-powered alter ego through many of his incarnations, beginning with The Incredible Hulk #1 published in 1962.

I read that first transformational story when Bruce Banner was trying to save Rick Jones—unsuccessfully, apparently—way back when that first gamma explosion happened.

That first Hulk has been called “an adolescent fantasy” character in that he gets to smash whatever he wants whenever he wants. People on the threshold of adulthood can feel like all they do is destroy things and people around them, so Hulk is kind of their “ultimate wish,” to obliterate at will. “Hulk smash!” indeed! He’s basically a simple concept, after all!

Actually, though, if you were paying attention, that first Hulk was grey (which Stan Lee wanted), not green. That color change took place due to ink problems, I hear. Although Hulk’s initial comic only lasted a few issues (six, I believe), he left the Avengers soon afterwards, and he showed up occasionally for a while. He often got into brawls with the Thing from the Fantastic Four, each claiming HE was the “strongest there is!”

That lasted for a long, long time as Bruce and Hulk were often secondary characters in their own stories. Tales would revolve around people who were interacting with the pair.

That’s where the inspiration came for the TV series based on the characters, appropriately named The Incredible Hulk. You may remember that Bruce Banner (who now had a first name of “David”) was portrayed by “ultimate nice guy” actor Bill Bixby. His green alter ego was played by body builder Lou Ferrigno, who still makes the convention circuit today. (I expect to see him again at cons soon!)

That show was kind of predictable, though, in that about 25 and 50 minutes into each episode, he’d “go green,” as it were, and Bixby would transfer into Ferrigno. Then Banner would feel guilty about it all and walk away into the sunset in the last minute or so, only to surface the following week.

The series was replaced by several TV movies that first introduced many Marvel heroes in live action to the small screen. Thor and Daredevil were the most memorable to me.

BACK TO THE ‘GREY MATTER’ The problem with a formula is that it eventually runs out of steam. The Hulk needed to go back to his roots, at least when it came to appearance.

The next big change for Hulk was to become “Joe Fix-It” or “Mr. Fix-It,” a grey enforcer in Chicago decked out in gangster attire. He was meaner and a little smarter, it seemed. He could say more than “Hulk smash,” including saying full sentences! This all started in The Incredible Hulk #324 in 1986.

He was apparently being hypnotized into playing this role, although how his intelligence was increased as a result, I can’t figure out.

See, the pendulum regarding the Hulk’s intelligence would swing back and forth. Sometimes he’d be smarter, then he’d go back to being a brute force of nature.

After that, Peter David took Hulk on several rides, including giving the Bruce Banner personality control of the massive Hulk’s green body.

The word was that Mr. David, who previously had worked as a salesman for Marvel, had access to sales numbers. Whenever those figures would start to dip, he would make a change in the Hulk, moving him up and down the intelligence scale, as it were. And the sales would rebound!

The bad news is that eventually even this ran its course, and Mr. David moved on.

When the identities of the Red Hulks were revealed, a lot of the interest diminished. No Puce Hulk, I guess!

There was also Planet Hulk in The Incredible Hulk #92-105, then Giant-Size Hulk #1, when the Big Green Guy ruled an alien world. That was popular for a while, too. Peter David has been telling more Maestro stories lately as well! And She-Hulk has had multiple books as well! Did you also know that Hulk had a son? Yes, he did! His name is Skaar, and he first appeared in Planet Hulk #1 in December, 2007. While Marvel continued to make significant changes to the Hulk (such as making his personality, shall we say, less cogent than it had been), those alterations never really lasted too long.

I think that fans of the Hulk wanted things to go well, but even they didn’t hang around too very long when the ship started to sink.

Then, recently, Mr. Ewing and company reworked Hulk into something more horror-oriented. The Immortal Hulk #1 was launched in June, 2018, and it caught the eye of Hulk fans and the comic press alike.

Unlike many incarnations of the Hulk, this one will actually make it to 50 issues! That’s somewhat unusual for the various versions of the Big Green Guy.

One of the “highlights” of this run was when the Hulk was captured and chopped into little pieces, each stored in a different bottle or other kind of container. The bad guy behind all this actually began to brag to his face about beating the Hulk when he suddenly notices that the Hulk is smiling. The baddie wonders why. Well, I probably shouldn’t spoil it here, but let’s say the baddie doesn’t get to enjoy his “victory” for very long!

Ewing has been working to unite several previous aspects of the Hulk, including Mr. Fix-It and even Bruce Banner’s abusive father! It’s all heading to that landmark issue #50, and what it will all mean, I don’t know, so I’m sticking around. I’m glad that will be the last issue because I was very seriously thinking about jumping ship if it had continued on past that.

That bring us to Mr. Cates and Mr. Ottley. I’ll be curious to see just what they have in store for the Hulk when they start their run in Hulk #1 in November. I’m hoping it will be something we haven’t seen previously. Given their ability to surprise us, I’m figuring it will be worth picking up.

Will they get 50 issues for their version? Could be! We’ll see just how many Hulk fans (and Cates/Ottley fans) buy into it!

What do you think? Has the Hulk still got more life in him? Will you be buying the new series if you are a long-time fan? What if you are new to the character? Will you buy it, too? Please be sure to share your thoughts below!