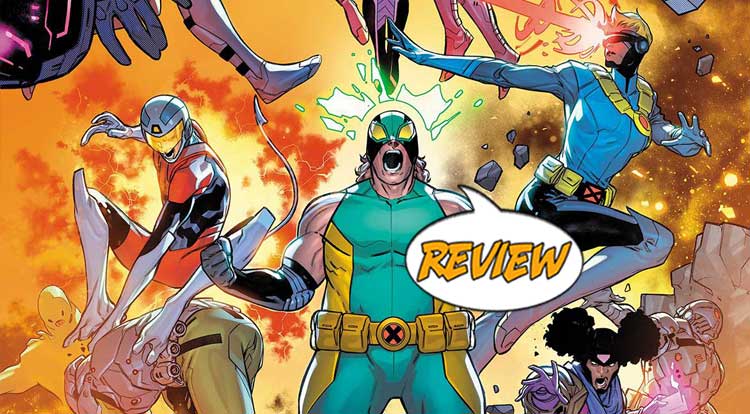 Children of the Atom #4 Review CHILDREN OF THE ATOM #4

At the Peter Corbeau Preparatory Academy in Brooklyn, the five members of the Young X-Men/Children of the Atom are going about their day-to-day lives, each wrapped up in their own stuff.  Buddy/Cyclops Lass wants to get into Krakoa at all costs, Carmen/Gimmick is worried about her strange symptoms, Gabe/Cherub is worried about a classmate who might be a mutant…   But Children of the Atom #4 is mostly about Benny, aka Marvel Guy, whose relationship with his family (especially step-brother Jay Jay, their youngest member as Daycrawler.)  Benny is dealing with a world of awkward, thanks in part to his father’s new family, but his relationship with Gimmick also makes a big turn in this issue.  With the announcement that the X-Men are opening Krakoa to non-mutants for the first time, the team prepares to once again try to sneak in with their alien technology powers, but C.R.A.D.L.E. strikes first, taking everyone but Daycrawler into custody.

Of course, when he comes back to save his team, he’s not alone,.

A LOT GOING ON HERE

Children of the Atom has been one of my favorites of the modern X-Men era, reminding me fondly of the good old days of the New Warriors.  The team’s membership is pretty remarkable in terms of representation, which I very much enjoy, and the reveal that Gimmick is LGBTQIA feels very real, since these are all modern Gen Z kids.  Benny’s worries about fitting in with his team and his family also feel quite authentic, but Cyclops Lass’ forcing the team to go along with her very problematic Krakoa plan makes for some uncomfortable moments as the issue progresses.  Artwise, there are no such missteps, as every page looks pretty amazing, especially the moments where we see the kids out-of-costume, experimenting with their powers.  The brief fight between the inexperienced heroes and C.R.A.D.L.E. is really nicely handled, especially the emotions on the characters’ faces as they fall, one-by-one.

With it’s pleasant echoes of Marvel past and a really successful last-page tease for next issue, Children of the Atom #4 balances out to be an above-average read, with a story that bites off a little bit more than it can chew but art that makes it all go down smoothly, earning 3.5 out of 5 stars overall.  If you’ve missed the first few issues, I’d recommend picking them up first, but this issue makes for an exciting use of the Krokoa-era status quo for an exciting “side story.”  It’s worth your time.

CHILDREN OF THE ATOM #4

There's a lot going on here, but seeing Marvel Guy's perspective makes for a fascinating issue and that last page reveal could be a game-changer.