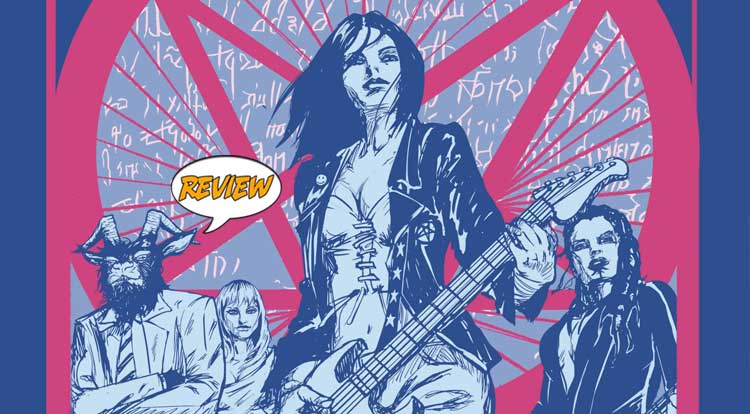 She sold her soul for rock ‘n roll, but now the bill has come due.  Your Major Spoilers review of Cherry Blackbird #1 from Scout Comics awaits! Previously in Cherry Blackbird:  Rockstar Cherry Blackbird sold her soul for fame.  Now at the age of 26, time is running short.  The day she turns 27, she’ll be dragged to Hell.  But Cherry is not one to go quietly.  The Devil tasks her with collecting seven demonic souls that have escaped the Abyss.  If she can do this before her next birthday, she’ll be released from her infernal pact and spared eternal damnation.  Heaven help anyone who gets in her way!

THAT’S ONE WAY TO OPEN A STORY

Cherry Blackbird #1 opens with a a post-coital couple somewhere, somewhen (the story doesn’t really give us any hints) arguing over a particular act that he wants and she isn’t particularly in the mood to do for him.  Things suddenly turn into a blood feast as a literal devil rips its way out of his anus, and stands before her coated in blood before asking where the shower is.  It’s a horrifying moment, followed by a smash-cut to our protagonist on the way to a gig.  Cherry Blackbird makes an ass of herself by verbally abusing an old woman in traffic, then arrives for her gig, giving a rousing rendition of her signature song, Drug Satan Death Witch.  After the gig, she returns to her dressing room to find Satan waiting for her, with a message: If she can help him round up seven of the worst souls in history, fugitives from hell, then he’ll negate the contract that cedes her soul to hell.

Of course, she has to learn a few things first.

RATED M AND WITH GOOD REASON

I have to tell you, the incredibly gross, bloody and shocking opening sequence burned up a lot of the good will that I wanted to give this comic based on the beautiful cover and the information in the solicitation.  There’s really no reason to graphically show a demon erupting from a human anus with that level of detail, even if your intent is to shock your audience into submission.  The issue also treats the dialogue as little more than a means to an end, which leads to some very awkward, leaden conversations.  There’s little subtlety to be had, which I suppose is great for getting the point across (“They’re all horribly evil,” says Satan, “so you’ll sort of be doing a good thing.”)  That said, there are parts of Cherry Blackbird #1 that totally work for me.  The conversation between Cherry and Satan is very well-constructed (though the issue’s problem with dialogue shows up there as well) and the training sequence of Cherry learning to use her new Satanic powers is nice, in a Buffy The Vampire Slayer sort of way.  The art has moments that really work, but is clearly the work of a young, inconsistent creator, and the muddiness of the colors doesn’t do it any favors.

BOTTOM LINE: HAS POTENTIAL, BUT ISN’T QUITE IN FOCUS

As someone who grew up reading the black-and-white indie comics of the 1980s, I can tell you that Cherry Blackbird #1 isn’t an unusually bad issue nor are the issues with the colors and the dialogue overwhelmingly bad enough to sink the entire issue for me, but it does leave room for improvement, earning 2.5 out of 5 stars overall.  I’ll be interested to see where this book goes from here, and whether or not the creators can get past the shock/grossout factors to effectively deliver on the premise, but as first issues go, this one hits right down the middle.

There is some muddy coloring and a few artistic peccadillos that are a bit distracting, but the general gist of things is interesting. The shock moments don't really land, though, and the opening sequence is absolutely gratuitous.