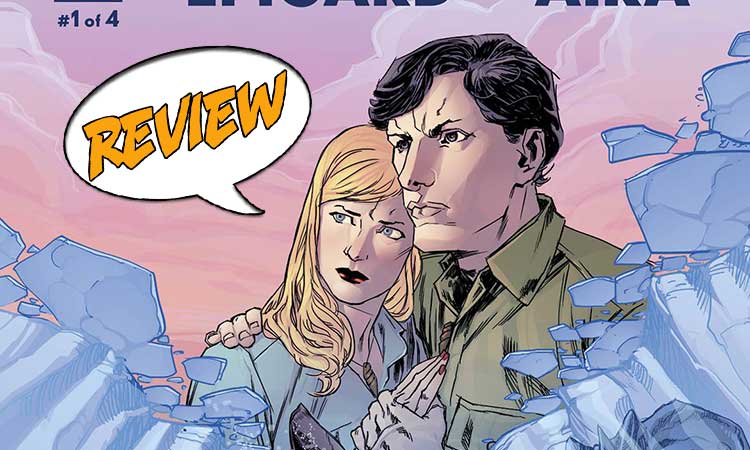 In The Secret Land #1 from Dark Horse Comics, Ben and Katherine continue their fight against the forces of fascism – Ben on a nameless beach in the Pacific, Katherine in the wastes of Antarctica as Die Glocke begins its evil plans.  What are they?  Find out in your next mighty Major Spoilers review! PREVIOUSLY:  Hitler has killed himself, the Reich in Europe has gone down in flames, and America is pressing hard against the Japanese in the Pacific.  Yet, the fight goes on as US Marine Ben Sullivan and his fiance, and OSS operative, Katherine, work to bring down Fascist forces.  Now, at the moment of victory, a dark cancer blooms in Antarctica…

LOVE IN A TIME OF WAR

The Second World War is almost over.  The Nazi Reich is dead in Germany, its adherents in custody or in graves.  In the Pacific, the Japanese fight with fanatical fervor, but the weeks are counting down before suns blossom over Hiroshima and Nagasaki.  But almost over isn’t the same as over, and in the shape of Ben Sullivan, a marine, and OSS operative (and his fiance) Katherine, the war goes on.

While Ben barely survives an encounter with a Japanese patrol during a mission ahead of an American effort to take the island, Katherine’s own mission and situation is infinitely more perilous.  Remember all those crazy conspiracy theories about elements of the Reich establishing bases in Antarctica, powered by zero point energy, with flying discs hovering all over the place, as dead end survivors plot the Reich’s triumphant re-emergence and final victory?  Well, in Christofer Engard’s taut and well constructed script, that horror comes fully to life.

After I read The Secret Land #1, I started to wonder at what point will genre fiction finally abandon Nazis?  I grew up in the 1970s, and it was wall to wall Nazis – James Herbert’s The Spear is a great horror novel with Nazi occult elements.  Even I (ahem) in a book published a couple of years ago, made use of the Nazis to flesh out the storyline.

The Boys from Brazil is a movie you should seek out simply for the bonkers storyline about cloning Hitler.  The British obsessed about Nazis for decades, in film, television and books.  Charlie Stross’s first Laundry Files book, The Atrocity Archive, makes fantastic use of Nazis trying to conquer the world again, but that was published in 2004.  It seems, with the passing of that generation, the Nazi grip on popular culture has finally began to wane, replaced by other human evils.  But that’s a different story.

In any event, The Secret Land #1 makes great use of those elements I mentioned before.  There are libraries of books that claim to tell the truth about what the Nazis were up to with their secret weapons projects at the end of the war, their plans to retreat to bases at the far ends of the Earth to re-build and conquer us all.  It is all nonsense, of course.  The last of the Nazis even now are being pursued through the courts, and their foul ideology is rightly banished.  But they do make for entertaining fiction.

Once Katherine arrives at Base 211, the plot really kicks into overdrive.  Inserted into the scientific endeavors of Professor Hesse, who is perfecting the Die Glocke, an engine powered by zero point energy, Katherine watches closely the horrors around her.  The Base is the Reich in miniature – hectoring rallies, proclamations of racial superiority (even as the cower at the bottom of the world) and the promise of secret weapons to rule the planet.  Hesse is a scientist, pure and simple.  He has no time for ideology, only for tests and theories and achieving his dream, even if it will inevitably end in bloodshed.

After multiple failures, the Die Glocke engine is powered up, but a strange side effect is noticed -odd sounds, and for Katherine, a horrifying vision.  This is where artist Tomas Aira brings his artistry to the fore.  All throughout The Secret Land #1, we have been treated to crisp and clean artwork; his capability in depicting machinery – ships, planes, vehicles – is second to none.  But the horrifying vista that Katherine witnesses in her mind’s eye, shows another side of Aira’s artwork, which promises to be endlessly entertaining as the inevitable carnage in future issues unfolds.

BOTTOM LINE: WORTH HUNTING DOWN

Some solid writing and plotting, coupled with fantastic artwork, makes The Secret Land #1 an essential purchase.  Sure, the Nazi tropes are nothing new, but they are well handled – there’s no nuance in the Nazis – they’re bad guys through and through.  The depiction of a capable woman of that era, matches the way women were able to demonstrate their own abilities as they filled areas of life previously cut off from them, is a refreshing reminder that for too long women have been regarded as second class citizens.  Katherine is cool, unflappable, and willing and able to get the job done.

What’s not to love about Nazis building secret bases, powered by powerful energy sources, with secret weapons ready to take on the forces of democracy (well, apart from common decency?) This is a strong first issue, filled with memorable events and characters.