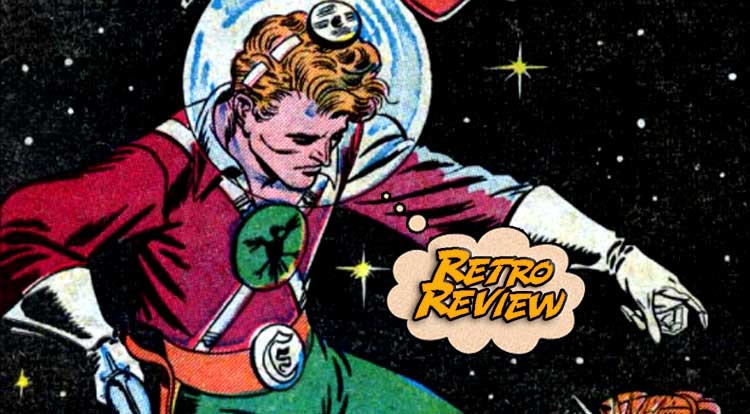 The grey area between the Golden and Silver Ages is a strange and fascinating place, but have you ever heard of the Knights of the Galaxy?  Your Major Spoilers (Retro) Review of Mystery In Space #1 awaits! Previously in Mystery In Space:  Having created one of the first science fiction fanzines back in the ’30s, Julie Schwartz and Mort Weisinger were serious about science fiction in comic books, especially as the popularity of the superheroes waned in the late 1940s.  Mystery In Space (along with its fellow series Strange Adventures) was conceived as DC’s premier anthology for tales of science fiction.  Space Ranger, Adam Strange and Ultra The Multi-Alien were still down the road when this first issue hit the stands, but the series chosen to kick off the book was actually more inspired by Arthurian legend than any ray guns or flying saucers. Our story begins with Lyle, a young applicant to the Knights of the Galaxy, a star-spanning organization protecting the space lanes from pirates and ne’er-do-wells of all stripes.  Their latest quarry is the wicked Professor Vorko, and tyro Knight Lyle has been sent to retrieve him after his capture by another Knight.  The art here is by Carmine Infantino and Joe Giella, and it’s some truly strong stuff, especially the uniforms of the future.  Sadly, Lyle’s inexperience works against him as Vorko gets in a sneak attack and prepares to flee custody! Though the Professor has rigged his uniform to shock anyone who touches him, Lyle withstands attack and is hailed by his fellow Knights.  Sadly, Vorko’s TWIN BROTHER is still free, and Lyle, having proven his guts, is sent out to bring him in.  Also: Vorko’s twin is named Korvo. As comic book science fiction goes, this story tries to lean towards the harder end of the scale, though I’m not sure if cosmic whirlpools are really a thing.  Whether or not they’re real, this one is enough of a threat to get Lyle into Korvo’s hands, and a tense standoff via viewscreen follows. Korvo’s ace in the hold is Ora, the daughter of Lyle’s commander (importantly named Artho, in case you missed the Round Table analogies we’ve been slinging already) but Lyle pulls a fast one and engages in some (really well-drawn) hand-to-hand combat, but gets waylaid by the villain’s steel gauntlets.  That’s when he gets the best space-idea of all. Lyle is able to not only complete his tasks, but bring back his boss’s daughter, with whom he would soon start a romance.  The adventures of the Knights were pretty short-lived, only making it 8 issues before disappearing, but it’s interesting to look at this series as a precursor to Adam Strange, which takes a very similar concept but turns it into a more super-heroic story.  Indeed, nearly all of the elements here get reused in other stories, making Mystery In Space #1 a fascinating look at one of the in-between eras of comics, featuring some truly impressive creators toying with pieces that they’d later reconfigure into the building blocks of the Silver Age, earning 3.5 out of 5 stars overall.  If you’ve never heard of this series, it’s well worth the time to seek it out.

Old-school science fiction that sows the seeds of the coming Silver Age, with impressive Infantino art and a lot of cool concepts.