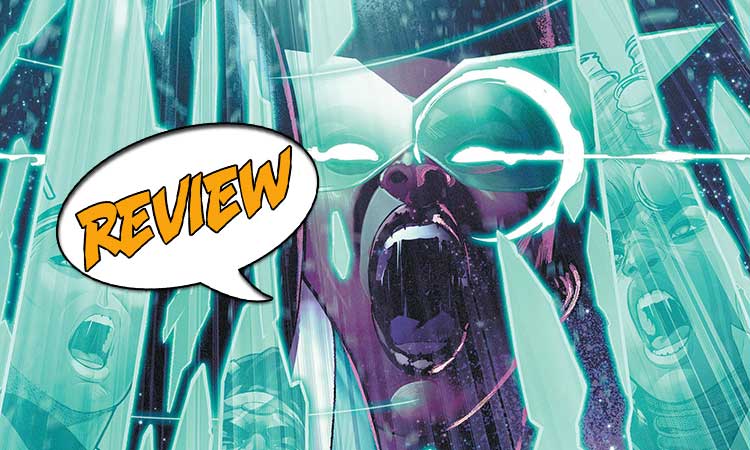 Everything is on fire, enemies both foreign and domestic have The City Enduring on the brink of destruction, and the lone Green Lantern on the scene, is almost out of energy.  Your Major Spoilers review of Far Sector #12, awaits! Far Sector #12 opens up right where the last issue has left off.  Everyone’s plots have been revealed and now it’s all come down to who’s going to come out on top.  Green Lantern Sojourner Mullein knows she doesn’t have the ring charge to engage the entire Defense Fleet before it destroys and entire city platform and the countless people living there.  Instead she focuses on the command ship and breaks through.  Once there she appeals to the commander to stand down, that killing her own people isn’t what she wants and that cold, emotionless, order following isn’t what’s needed.  The commander stands down and the imminent threat is gone.  The issue then goes into a sort of epilogue.  It explains how things went with the emotional exploit referendum, the fallout from the city council’s scheming, and Jo’s relationship with Syz and her father.

MORE OF A WRAP-UP THAN CLIMAX

Far Sector has been a series that’s taken a lot of twists and turns and in turn created a lot of threads that needed to be dealt with in the end.  Far Sector #12 seems to exist for this purpose, perhaps at the expense of a more explosive finale.  Rather than a bombastic throwdown as might be expected, Jo finds a more subdued solution that plays with one of the central themes of this series, which has been the importance of emotion.  And while this is thematically on point, it is still done quickly.  In fact, many of the bigger plot elements in the series, which also represent many of the other themes of the series like police brutality, race relations, and government corruption, are wrapped up here quickly, some of which with a single panel. A substantial portion of this issue is actually devoted to Jo and Syz spending time together in a park and kissing for the first time with the emotional exploit turned off for Syz.  It’s as if N.K. Jemisin is trying to say with this issue is that while it’s important for the other stuff to be dealt with, it’s only so that life can be enjoyed and felt.

Jamal Campbell’s art in this series has always been on point.  The color work alone is deserving of praise, but combine this with his design work, facial expressions, action sequences, and the way he handles scale, and you have one of the most visually striking series in a long time.  Far Sector #12 encapsulates all of that.  While it’s always stunning to see a big space battle like we get in the early portions of this issue, it’s the quieter moments at the end where the artwork really shines.

Far Sector has been one of the best series out there and certainly the best thing to happen to The Green Lantern mythos in years.  Far Sector #12 is not a perfect ending to this series though, it quickly ties up plot threads in unsatisfying ways at times and the big climax is a bit well, anti-climactic.  But where it stumbles there it makes up for it by being a visually beautiful and well written, personal conclusion for Jo.  This issue is a good period for this portion of the character’s history.  4.5 out of 5 stars.

Far Sector #12 is a fine send off for the series as well as the Young Animal imprint in belonged to. The emotional resonance and visuals are enough to offset some of the pacing issues in the early pages.