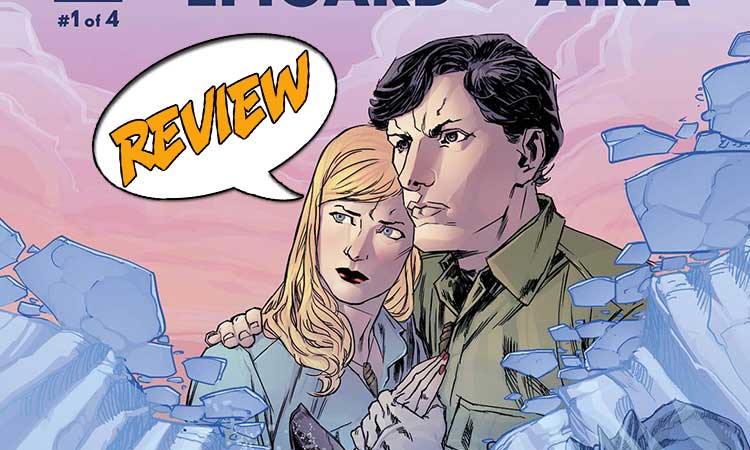 It is 1945. Germany may have surrendered, but in this story, they have not given up the fight. Just what has American spy Kat found herself among? Find out in The Secret Land #1 from Dark Horse Comics! Previously in The Secret Land: World War II is drawing to a close. VE Day has happened; VJ day is imminent. If fate weren’t so cruel, Ben and Katherine would finally be getting married and moving forward together with their lives. Instead, they ended up half a world apart, Ben in the Navy, and Katherine sent to Germany as a spy.

GIVING THEIR LIVES TO THE CAUSE

The Secret Land #1 opens in the East China Sea in June of 1945. Ben is on board an aircraft carrier holding a seashell in his hand and thinking about Katherine. They found a pair of shells on the beach and used them as a connection, instead of rings. We know where Ben ended up; this is where we learn that Katherine joined the OSS and was hoping to go to Germany. And now he has received a telegram saying that she was dead.

As he ponders the possibilities, we see their last moments together when she boards her plane. She asks him how to say, “I love you,” in Japanese, and this expression, “Aishiteru,” was the word she would get to him to let him know that, somewhere out there, she was still alive and well. Ben remembers this, but he is on a mission to clear a beachhead on an island. When things don’t go as expected, he takes some uncharacteristic risks and is badly wounded. As he drifts away, he says, “Aishiteru.”

Across the world, Kat suddenly wakes up. She isn’t dead; she is on a U-Boat. After months at sea, they have reached their destination, apparently Antarctica. Germany may have surrendered, but there is a secret base here and they have brought in Professor Hesse, and Kat is here as his assistant. The Nazis have some sort of machine here, but not enough power for it. That is where Hesse and his device come in.

Cue the weekly rally where Kat means Julia, a radio operator, who fills her in a little before she must go on shift. Then we flash to three months later. The Professor and Kat have been trying to get the device working, and the General is getting impatient. He sends men to observe their test. The device does not ignite. To drive home the point that they are Nazis, he has orders to kill their laborers (Russian prisoners) until the Professor makes some progress.

Fortunately, the device starts. The General’s man leaves to relay the news, but one of his guards drops down dead. And Kat feels a flare of heat from the seashell she wears around her neck. And she gets the strangest notion about this device that now is running.

The art of The Secret Land #1 has a long of strong points. It is ambitious. From the fleet of Navy ships at the opening, including an aircraft carrier, to the nighttime landing on a small island, to Kat’s arrival in Antarctica, several grand scenes are illustrated. And they are grand, which gives the book a cinematic feel. They also take place at times when the light is interesting, so we see, for example, the play of low sunlight against the broken ice at the entrance to the Antarctic base. If I have any quibble over the base, it is how impressively large it is considering this takes place in 1945. However, this does add to the drama and helps present the base as a major threat populated with large numbers of Germans. It is no mere scientific outpost of a dozen people.

I like most of the character work. The lines are clean, and the main characters are individual, recognizable and clearly reacting to the environment around them. If I have any quibble about them, it is only that occasionally they lose some consistency in look, especially when drawn in profile. This is more noticeable with some of the background characters who can look out of proportion at times. There is also a lot of emphasis on male jawbones, enough so that I found it somewhat distracting. To balance this out, there is a lot of machinery and technical stuff which is quite well drafted.

BOTTOM LINE: OFF TO AN EXCITING START

I enjoyed The Secret Land #1. The set up is complicated, so at times the narration can feel a little heavy. But the pay off is not only that Kat is still alive, but that she has found herself at the heart of something huge, and her connection with Ben is somehow important to this all. If you like action and intrigue, this is a solid read.

Separated by thousands of miles, Kat has no way to let Ben know she is still alive…or does she?