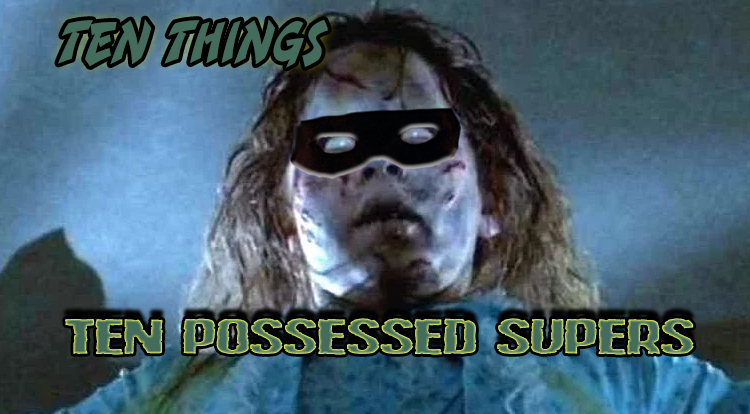 They say that it’s nine points of the law.  Welcome to Ten Things: Ten Possessed Supers!

Whooshman-Bicarbonate Films, in conjunction with An Amateur Comics Historian and the aaaaaaargh I am not one of you. I come from an ancient time, where I am known as The Kicker of Elves, and also known as The Angel Crusher, Presents: First appearing in 1950, Darna is one of the most popular (possibly THE most popular) of Filipino superheroes. When a young girl named Narda encountered a shooting star, she found a stone of unknown origin, which she hid in her mouth to keep safe. The stone somehow empowered her (accounts differ, but the version shown here, from the 2005 TV show, ages her up to 18 and makes it explicitly alien in nature), allowing her to call out her heroic name and become Darna! Much like the golden age Captain Marvel, Darna is often portrayed as a second person who temporarily possesses Narda’s form, then transforms back when the trouble is over. Calling Larfleeze the “leader” of the Orange Lantern Corps is something of a misnomer, as the Orange Ring is generally only utilized by one person at a time, as it imbues him with an insatiable greed. Though he doesn’t share his powers, his food or his toys with a Corps like other Lanterns, his ring can reanimate anyone he kills as an Orange phantom wielding a portion of his power. Though useless against the forces of hope (Blue Lanterns) or love (Star Sapphires), his literal army of ghosts makes for formidable foes, leaving the mad alien possessed by the spirits of everyone who ever stood in his way. That’s both deep and disturbing. A scientist by trade, Olivia Norton made a fortune patenting various drugs, but was fascinated by death itself. Her studies led her to a serum that allowed her to pierce the veil of mortality and see what lies beyond. Turns out that it’s nothing but darkness, endless black energies that have filled her being and that she can now control and manipulate. Though she can use her new powers to heal, Darqueen tends to drain the energy from innocents and foes instead, and her embrace of straight-up evil makes me wonder if there’s even any of Olivia Norton left, or if the darkness has possessed all that she once was. A Haitian immigrant and certified genius, Moses Desalines quickly became rich, famous and wildly successful. When a device designed to break through theoretical spaces between parallel universe malfunctioned (thanks to criminals targeting him), Moses was thrown into a strange liminal space and merged with one of the creatures that lived there. Returning to Earth, Moses found that his tentacles could not be removed, but gave him superhuman strength and endurance, as well as the ability to teleport himself. In addition, his tentacles are incredibly dexterous, serving as extra hands and making The Kraken a media sensation as a hero. A very literal example, as the initial manifestation of the being called The Weird occurred when an energy creature known as a Zarolatt possessed the dead body of one Walter Langley. The resulting hybrid was highly unstable, actually exploding in the atmosphere, but his/its energy essence remained. Eventually, it struck the disembodied energy form of Captain Comet, causing a strange feedback that brought both of them back to something resembling life. Though he’s a new being, The Weird still wears the face and form of Langley, seemingly out of habit. Though retconned as an entire Corps unto themselves, the original Star Sapphire appeared when Carol Ferris (main squeeze of Hal “Green Lantern” Jordan) was possessed by an alien stone that created an evil second personality. Later stories established that the stone was created by the Zamarons, the female members of the race that would become the Guardians of the Universe, using the portion of the emotional spectrum that comprises love. Star Sapphire is now sometimes a hero, but even the writers don’t seem to agree about how much of her is Carol and how much is not. The spoiled prince of planet Kranaltine, Gavyn was thrown out an airlock in a murder attempt, but was saved and resurrected by the alien Mn’Torr, who gave him a pair of wristbands and a staff that gave him superhuman celestial powers. During the Crisis on Infinite Earths, he was seemingly killed, but his energies were sent across the galaxy to empower young Will Payton as another Starman. When he discovered the truth of his origins, the Prince Gavyn persona began to come to the forefront, and eventually took over Payton’s mind. By the time of the Rann/Thanagar War, Prince Gavyn was operating as Starman in Will’s borrowed body, as though Payton was entirely gone. After being struck by lightning, Sharon Vance discovered that she was the host to a cosmic being named Kismet, which imbued her with powerful electromagnetic energies. Thanks to the containment suit created for Superman during his time as a human lightning bolt, Sharon/Kismet focused on stopping crime, with the media dubbing her the Strange Visitor. She seemingly died to save Superman, but later reconfigured her energies and returned to action. When last seen, she had joined the Justice Foundation, under the leadership of Vixen. It’d be great to see them in action, he said, hinting broadly to DC Comics. A complicated example, as Naohisa Tatsui is a paleontologist who is possessed by a spirit entity known as Seto, a creature who is himself possessed by the Gaisoul Ken, a mystical sword that can turn him into Ryusoul Brown. As an ally of Kishiryu Sentai Ryusoulger, Naohisa/Seto can channel different power sources (“souls”) in battle, but are somewhat hindered by Tatsui’s advanced age.

It’s still a great looking armor, even if it’s a redeco of a previous character, Gaisoulg. Our third Lantern Corps member of the day is the most complicated, as Driq of Sector 667 began his career as just another Green Lantern. Somehow, though, his ring’s defense mechanisms malfunctioned, and when he was killed in battle with Sinestro, rather than seek a new host, it animated Driq’s shattered form in a half-alive zombie-like state. It was never clear how much of the resulting entity was actually Driq, as he communicated in nonsensical grunts and moans, but regardless, the later destruction of the Central Power Battery of Oa meant the end of Green Lantern power, and thus, the end of Driq.

Well, at least until the Black Lantern rings started a’flyin’…

Once again, this week’s topic, Ten Possessed Supers, is all me, but feel free to follow along @MightyKingCobra to suggest your own! There’s always more Ten Things madness on my Twitter or check out the full Twitter archive here! As with any set of like items, these aren’t meant to be hard and fast or absolutely complete, if only because fifty percent of X-Men stories involved body-swapping or possession. It’s a pervy tradition. Either way, the comments section is below for just such an emergency, but, as always: Please, no wagering!